A century ago on Broadway. If briefly.

A glimpse back to three of perhaps not the best or best-known shows to tread the Brodway stage in the first decade of the 20th century ... prompted by the discovery of this little bundle of photos ... how splendid that they survive! 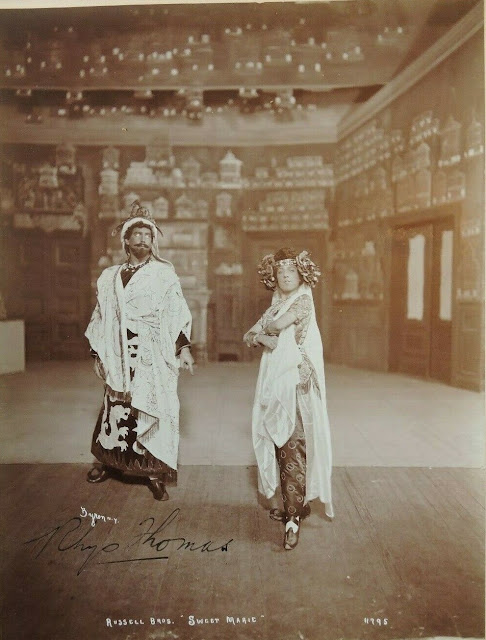 Sweet Marie (the title taken from a recently popular song) was a very shortlived musical comedy produced by Oscar Hammerstein at his Victoria Theatre 10 October 1901. It was initially credited to 'W Brown and R Jackson' as authors, but it was no secret that the real writer was the producer himself. The stars of the piece were two sketch artists known as the Russell Brothers who, here, played a pair of French sisters whisked off to Bombay, for reasons best known to Mr Hammerstein and the scenic designer, for the length of the second act. English vocalist Rhys Thomas (in brown-face) was cast as the Indian magician, Castafore. Since vaudeville singer-dancer Eleanor Falk appeared as someone named Nubiani, I preume that the lady here pictured is she, rather than one of the 'heroines'.

Sweet Marie seems to have been a 'filler' intended for no longer than its 28 performances, as the main participants were all booked into vaudeville dates for the week following its closure. Algeria, however, was definitely not. After an unimpressive first production (Broadway Theatre, 48 performances) it was actually revamped and tried again. But it had rather more craftsmanlike names attched to it. Book and lyrics by Glen McDonough, music by Victor Herbert, direction by George Marion, performers such as William Pruette, Ida Brooks Hunt and soubrette Harriet Burt as Millicent Madison M.D. Here is the last-named in olde Algiers with her troupe of trained nurses and what looks like Mr Pruette ...


From Rurarabia to Olde England. Someone thought it a good idea to drag out the very overused Peg Woffington tale for another round of the stage. William A Brady presented Grace George (Mrs Brady) as the lady in question at Bridgeton, NJ, 13 November 1902, and traipsed Pretty Peggy round the country, ending up 23 March 1903 at the Herald Square Theatre. Circus incidentals, miles of 'hokum', gimmickry and colourful staging kept the piece afloat until it returned to its natural habitat, on the road. 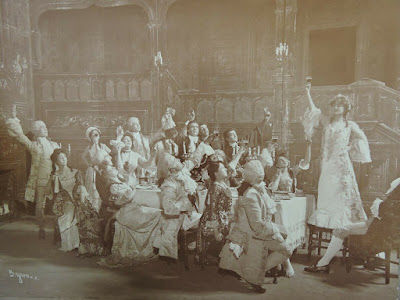 The piece and its staging stayed alive (latterly without Miss George) for a number of years, and even peeked back into New York ...  well, let's face it, directors are still using the people-rushing-through-the-auditorium trick today, a century on ...