THE PRIVATE LIFE OF CARL ROSA


Yesterday, I was asked if I knew the details concerning the identity of the second wife, and the children, of Carl Rosa. I don’t think I had ever bothered to investigate the details of his family life, beyond the death of his famous wife, although I had vague memories that he wed an English chorine from his company named Mary Ann or something. The DNB and Wikipedia both say he had a wife named Josephine (blank), who died in 1929. Oh. Josephine? Really? Is my memory going?

Well, if the DNB and Wikipedia can’t find the truthful and precise facts … its time for Gänzl to have a go.

Right. This seems to be the source of the ‘Josephine’. Daughter Vi’s family gravestone (d 7 September 1929) in Highgate Cemetery. 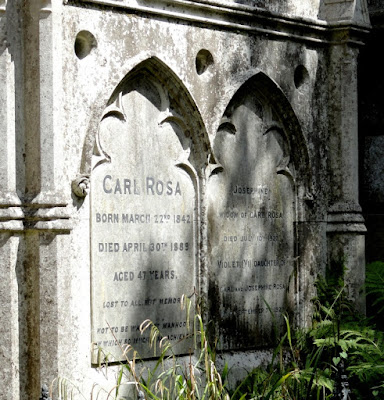 The only trouble is, that it’s a lie. Violet, Rosa's first child, was, in fact, born and registered as Violet Rosa Lowrey, in 1879, the illegitimate daughter of Carl Rose alias Rosa and chorus singer Eliza [Mary] Lowrey. Mother and daughter can be seen in the 1881 census, staying with Eliza’s Irish mother. Eliza was born (as plain Eliza Lowrey) in Oldham in 1858.


Well, maybe he had other children by other women, including this ‘Josephine’?

Well, yes, he had three other children. And no. Eliza was the mother of all three. There were sons Herbert Charles Rose (sic) and Charles Harold Rose (sic, b 5 December 1883), and daughter Gertrude Sophia ka Sophie (b 30 January 1885), who was actually christened as Rosa rather than Rose.

So, it’s really quite simple. ‘Josephine’ was merely a stage name. Josephine Warren. But there is no evidence of any marriage between her and Carl Rose-Rosa. Not in Britain, anyway. Merely of children. 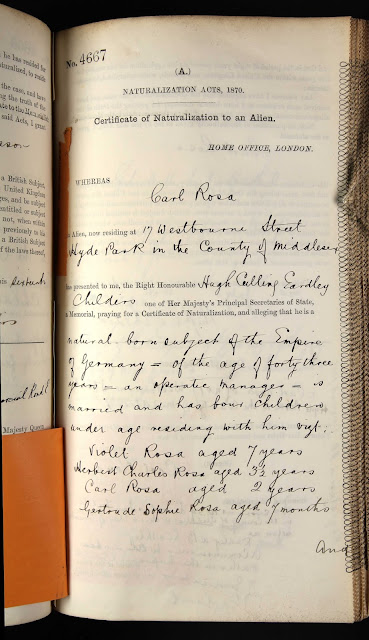 Vi remained with mother in their 16-roomed house at 17 Westbourne Street, Hyde Park, unmarried .. and died in 1929: her will summoned sister Sophie to be her executor..

Herbert, a tea merchant became a lieutenant in the RFA and died during the Great War, leaving a daughter, Aileen [Maria Valentine] (d Dublin 29 July 1942)

Carl apparently became a seaman, then a farmer in Canada, and died, unwed, in Britain in 1943. 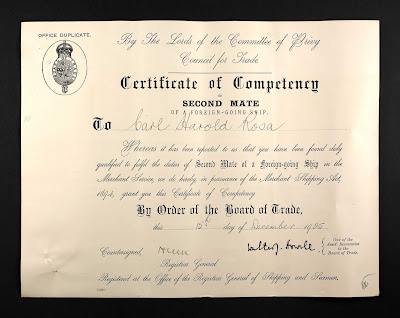 There. Is that sufficient in the way of facts?

I don’t know who was responsible for erecting the 1930 memorial at Highgate, and exactly who lies beneath it. I suspect not the man himself. But DNB and Wikipedia can find that bit out ... when they've finished making the above corrections. And maybe finding the putative marriage banns? Come on, boys, these things only take a few hours ...  :-)