Lizzie Mehlhaus (briefly Mrs Annandale) was touted in her time as the ‘prima American contralto’ and ‘the successor to Phillipps and Cary’. While she may not, really, have made it to those heights, she had a good career in America, and performed briefly in both Britain and Italy, before fading sadly at the last.

Lizzie was born in Baltimore, the daughter of Hamburg-Jewish businessman (‘tobacconist’, ‘sugar – or is it seegar? – merchant’, ‘cigar manufacturer’), Solomon J Mehlhaus (‘Mailhouse’ ‘Milehouse’), and his English wife. Solomon had left Germany for Britain in 1845, married (as Melhausen or Melhouson) Miss Emma Winer (b Petticoat Lane ?1 March 1827), daughter of a Minories fishmonger, at Ipswich in 1848 (22 April), and they departed for the United States the following year. Their daughter, Sarah Elizabeth, thus, was born in America. And Solomon changed his name yet again. The 1860 census seemingly gives it as ‘Madhouse’, but I think it would be ‘Mailhouse’ which is the name under which he applied for an American passport, when travelling to somewhere foreign with 12 year-old Lizzie in 1862. The local German press, however, insisted on ‘Mehlhaus’ to his dying day. In 1879. By which time Lizzie wasn’t a Mehlhaus anymore, anyway, because she had married (3 February 1870) and divorced (1879) a Scots retail clerk named William Johnstone Annandale (d 3 November 1887).

Mother Emma was, apparently, something of a singer, and Lizzie was taught music at Baltimore’s Peabody Institute. She seems to have made her first concert appearances there in 1872, with sufficient promise that, in June of the year, mother and daughter took off to Europe, in the obligatory fashion of the time, for lessons. They chose Milan, and they chose Lamperti, and Lizzie showed her occasional stuff in private and even public concert (‘Pensa alla patria’, duet with Varesi). They returned to Baltimore the following year, but Lizzie went back to Italy for a second bite and, in March 1875, I spot her at the Teatro Sociale in Monza, singing Casilda in Ruy Blas and Nancy in Martha with Santina Lezi and Alessandro Boetti. By April 1, however, she was back home and concertising in Maryland (‘Che faro’, Mozart, Rubinstein, Schumann ‘rühmlichste bekannte Altisitin stürmisch applaudiert’). In June, she travelled with Caroline Richings to California, as second contralto to Zelda Seguin, for a short season in opera but, thereafter, seems to have limited herself to more concerts in and around Baltimore, until the HMS Pinafore craze hit, and she found herself cast at the Broad Street Theatre, Philadelphia, to play Little Buttercup (‘sings sweetly and acts with much comic force’). When the Josephine left, Lizzie hitched her contralto up a notch and took over. She gave her Buttercup again at Ford’s, Washington (‘the famous contralto, late of the Strakosch Opera Co’) and at Baltimore with Miss Richings, and returned to Ford and Zimmermann for more light opera – Germaine in Les Cloches de Corneville, The Sorcerer and a homegrown piece called The Mayor, which was given a brief professional try. 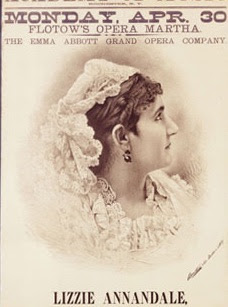 In 1880-1, Lizzie was back with Strakosch and Hess, playing the contralto roles in Faust, Il Trovatore, Mefistofele et al, and then, in 1882, she joined Emma Abbott’s troupe. This was the move of Lizzie’s life and career. She would remain the principal contralto of the company through the whole nearly-a-decade of its existence, ending only with her dear friend, Emma’s, death. During those years, she played a huge range of roles in (versions of) operas of all kinds, from Arsace in Semiramide to Adalgisa in Norma, from the Gipsy Queen in The Bohemian Girl to Donna Carmen in The Rose of Castille, from Azucena, Nancy, Pierotto, Orsini, Frederic in Mignon and Smeaton to Dame Carruthers and Katisha, and to fulsome praise: ‘without a rival in English opera’. ‘The lady has a very fine contralto voice, rather verging in the register on the mezzo-soprano. It is very clear and powerful and well-cultivated’. In the off-season she even had time to pop across to England, and make a brief appearance with Carl Rosa’s Opera Troupe, at the Theatre Royal, Drury Lane, as the Gipsy Queen… 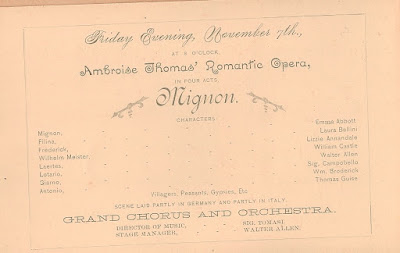 And then Emma died. And nothing was quite the same. She went out with a company playing The Royal Middy, she played some small opera seasons, and then she took out a Lizzie Annandale Opera Company with William Broderick, toured with an Alexander Spencer company which spent summer at St Louis’s Uhrig’s Cave, and then tried another venture of her own. It collapsed at Springfield, Missouri. And, as a result, Lizzie made the press in quite a novel way.

She appealed for financial help to the telegraphists Union. In 1883 she had stage a benefit for the striking telegraphists and donated some $3000 to their cause. Ever since, she had been their mascot, and the local branch was liable to turn up in mid-opera with flowers for the lady. Now, apparently, it was their turn to help her. I don’t know how much came in, but she got home eventually. The press loved it. 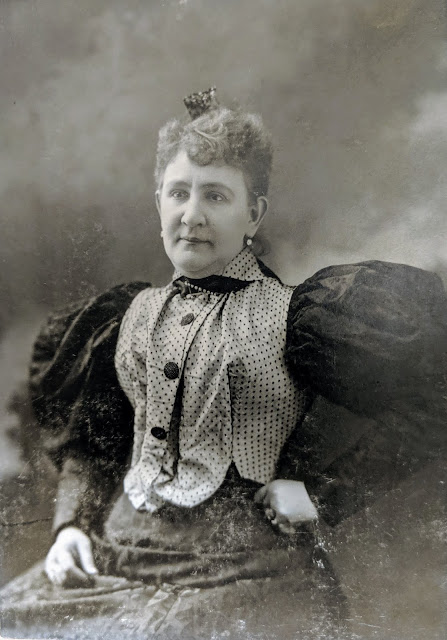 But things were going downhill. She played with something called the Rosenbach company, with the equally faded Payne Clarke, then she switched to the straight theatre and played with the aged Lydia Thompson and her family in The Upper Crust, and went on tour with Trilby singing ‘Ben Bolt’ as Madame Vinard. She played with the minor Marie Tavary opera troupe and, in 1897, a journalist ran across her in Maine singing with a troupe of amateurish variety folk (‘The performances were pathetic. Neither night were there over twenty in the audience’) called the Royce Rolleston Players. ‘She is now the wife of Frank Rolleston’ he reported, a fact confirmed by the 1892 census of Brooklyn, where the couple can be seen living in Baltic Street, with Lizzie’s mother. The Newark DailyAdvocate (Newark, Ohio) of May 2, 1895, in its write-up of a tour of The Crust of Society, talks about Lizzie and adds, 'Her husband, Frank Rolleston, is leading man of the company, and in order to be with him during his travels, Mr Lewis was enabled to get her at just one-third the salary she could really get in opera.’ In the May 17, 1904, Waterbury Evening Democrat of CT, they are reported to be playing in vaudeville at the Jacques in a ‘farcette’ called Oscar’s Birthday. 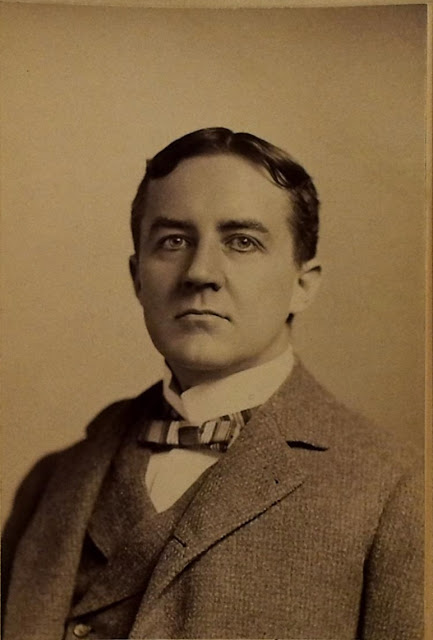 By the time, in 1910, that I stumble on her again, she seemingly has yet another husband, an Englishman named Mr Forster Richards. He and she are living in New Jersey, admitting to 46 years of age and 19 years of marriage. Perhaps he was ‘Frank Rolleston’. Then, in 1912 (‘aged 48’), they are crossing to Great Britain. And mother went too! They voyaged back and forth, and Emma Mailhouse seems to have died in New York, 13 April 1922. And Lizzie? She appears to have ended up in England. Because in 1930, three decades since she had troubled the world’s press, Lizzie’s photo appeared on the pages of the American papers. And even as far afield as Singapore. The 69-year-old some-time opera star, they reported, in florid journalese, was an invalid and in the Westminster Workhouse (‘From fame in opera – to the poorhouse’). She looked very good in the photo – especially considering she was 79, not 69. Mr Richards was there too, 67, bearded, chipper and smiling, yes, that could be 'Frank Rolleston' ... 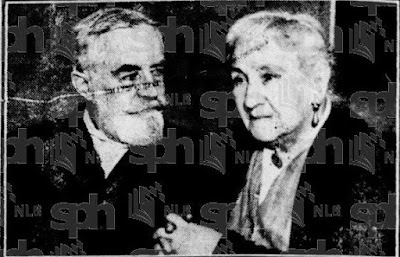 And that’s where I leave them. The journalist seemingly didn’t keep in touch. Mr Forster Richards apparently died in 1951, aged 87. I imagine the considerably-older Lizzie had gone before. Perhaps the Elizabeth Richards who died in Lambeth in late 1938?

I append here a passage from Sadie Martin's book The Life and Professional Career of Emma Abbott (date 1891) which was written with the assistance of Emma. There are several paragraphs in the book about Lizzie Annandale. One says she ‘joined the company in 1881, and with the exception of one season, has since been continuously one of the most popular members. She has usually appeared six, and often seven times each week, and yet at the beginning of the present season her voice seemed as fresh as ever. So implicit was Miss Abbott's trust that her contralto would not fail her, Annandale never during her years of connection with the company had a regular understudy'.

‘It is not usually known that during her years of application abroad, Miss Annandale studied soprano roles, yet no one, or at least few, who ever heard her highest notes, failed to express surprise at their clearness. Her range is simply wonderful, extending two octaves, or from low A to A above the staff, singing either extreme with perfect ease, and pleasing effect. She has at various times assumed soprano roles, and always with success. Among these is Carmen, for which she was always cast at a performance of that opera by the Abbott company.’ The next paragraph tells that she was especially popular with patrons in the west. It goes on, ‘Patrons of the company soon learned to associate Abbott and Annandale professionally. Their Martha and Nancy, Leonora and Azucena, Norma and Adalgisa will long be remembered.’

The book may be a decided hagiography, but it seems pretty right where Lizzie is concerned.
Posted by GEROLSTEIN at 7:28 PM