The pretty Swedish girl .. from Brazil.

.
These little ladies smiled out at me from the pages of ebay today. 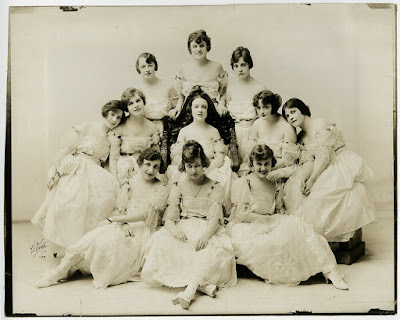 And I would be able to tell you their names, were it not that the show in question actually had two girlie choruses ... a dozen 'showgirls' and a dozen or so 'dancers'. Which are these? Can one 'dance' Allan K Foster's choreography in those shoes?

The show was titled The Girl from Brazil, and it was produced in America in 1916. But it was not an American musical. In mid-wartime, the piece was imported from Vienna. Of course, it was not allowed to remain unbotched as Die schöne Schwedin became, under the artistic direction of Mr Shubert, The Girl from Brazil. The score was diluted by numbers by a young man named Romberg. 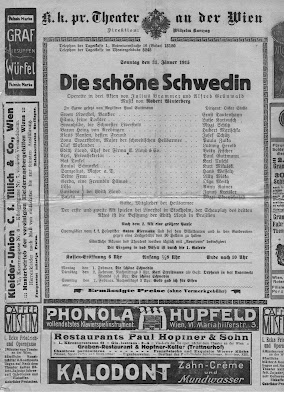 The Stockholm banker Sven Liverstol (Ernst Tautenhayn) is in secret money troubles and anxious to marry his beloved daughter Hilma (Luise Kartousch) to the apparently rich young German Baron Heinz von Reedingen (Hubert Marischka). He is offered a large loan by Torkel (Karl Tuschl) and Schnorkel (Kurt Mikulski) on condition that the marriage takes place, but he is flung into desperate straits when his biggest customer, a dazzling lass from Brazil called Edith Lloyd (Betty Fischer), turns up and won't wait to withdraw her funds. And so there is no marriage, no Torkel-Schnorkel money, and when Edith goes off back to Brazil, with the actually underfunded Heinz as her secretary, she leaves the Liverstols thoroughly in the Swedish soup. In Act III, however, Edith finds her business in trouble through growing competition from one Sr Camberito. It turns out that Camberito is none other than the financially recovered Liverstol, and all can end with Hilma and Heinz at last together and with the money-marketing Edith and Liverstol joining hands and fortunes.
Die schöne Schwedin proved something of a a disappointment at the Theater an der Wien and it was demoted soon after its 50th performance (16 March) to be replaced in the evening bills by Granichstaedten's Auf Befehl der Herzogin, a good-old-days piece which proved much more to the wartime public's taste than this often unromantic tale of financial dealings. Nevertheless, it went on to numerous other productions. It was produced in Munich starring Pia von Moosburg, Budapest was given Vilmos Tihanyi's Hungarian version, A szöke csoda (the marvellous blonde), it was foreseeably snapped up by Albert Ranf for the Stockholm Opera House and the Shuberts took up the American rights. In its American production the piece started out from New Haven 11 May 1916 under the curious title A Brazilian Honeymoon (perhaps a reference to the very first Shubert success, A Chinese Honeymoon), but by the time New York was reached, the lovely Swedish lass (played originally by Marguerite Namara, then by Beth Lydy) had given place to The Girl from Brazil (statuesque Frances Demarest) as the show's title. Hal Forde was Liverstol, John H Goldsworth played Heinz, and George Hassell had an enlarged comedy rôle as Torkel (Schnorkel had vanished). The American version was the work of Edgar Smith (book) and Matthew Woodward (lyrics), and Winterberg's 'above average' score was supplemented by the inevitable Shubert interpolations from the pen of Sigmund Romberg ('Bachelor Girl and Boy', 'The Right Brazilian Girl', 'Señorita', 'Come Back, Sweet Dream'). In spite of agreeable notices the piece remained only 61 performances on Broadway.
Germany: Theater am Gärtnerplatz, Munich May 1915; Hungary: A szöke csoda Budai Színkör 22 May 1915; USA: 44th Street Theater The Girl from Brazil 30 August 1916. 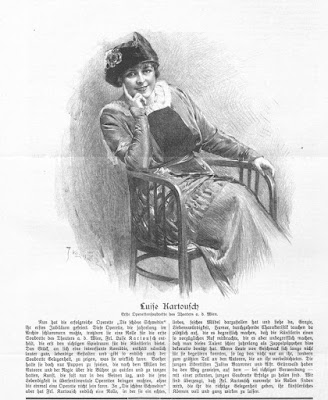 Posted by GEROLSTEIN at 8:05 PM