End of episode. For my next, I'll go back to the Le Corsaire B team: Mlles Cellier, Poussin, Troisvalets, Pierron, Villiers, Savel, Rousseau ...

An experienced brigade. I see in 1851 the four last-named already dancing prominently in the Ballet des Nations, and the whole six are featured in Aelia et Mysis in 1853.

Francine [Augustine] Cellier (1839; d Paris, February 1891) did not become a long-term pensionnaire of the Opéra. After some six years, aged only 20 ('très gracieuese, très jolie') , she gave up dancing for acting, studied at the Conservatoire where she took a first prize in comédie, moved to the Gymnase, and then the Théâtre du Vaudeville at the start of an honourable career in which her portrayal of Madame Pommeau in Les Lions pauvres was a highlight.
He greatest 'success', however, was her liaison with George Eugene Haussmann, Prefect of the Seine, the man immortalised by his 'clean up Paris' building campaign. Francine, noted for her intelligence as well as her grace and beauty, apparently put her money into bricks and mortar rather than diamonds. 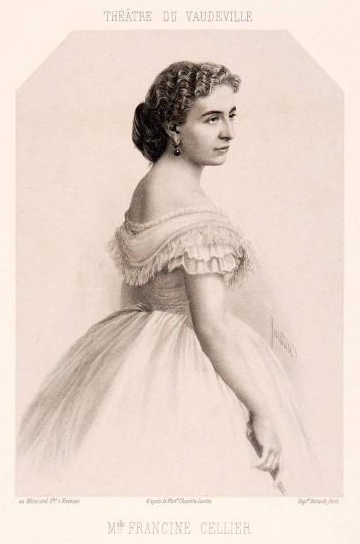 Laure Poussin 'fille d'un valet de chambre de la grande maison'. I see what I suppose is she in 1851, in Zerline, in Aelia and Mysis in 1853, in Orfa and Marco Spada in 1857, in Sacountala in 1858. Dupeuty marked her as 'très jolie, surtout du mérite'. However, he also noted that she didn't seem to be going forward. Actually, she went north. In 1859 she supported Ferraris at St Petersburg where she was marked as 'pas encore une grande danseuse mais promet beaucoup' ... in 1862 she was still there .. in 1867 she was mentioned as 'retired.

Elise Troisvalets, of the same class as Poussin, proved much more durable. 'Une jolie brune, for more than a decade, she was one of the most frequently seen soloists -- one of the 'big four' or the 'Qautre filles Aymon' -- on the Opéra stage in both ballets and opera ballets. I see her in 1853, in Aelia et Mysis, in Gemma, La Corsaire, Orfa, Marco Spada, as Pierette in Le Marché des Innocents, in the Gitanilla of Il Trovatore, in La Muette de Portici, Herculaneum, La Magicienne up to 1865, when she quit the company. She crossed to the Italiens, visited London to appear at the Italian opera in La Harem, but by 1867 she, like the rest of the 1850s team was listed as retired. So I guess she was not the Mlle Troisvalets who featured in the dances of Le Tour du Monde en 80 Jours at the Cirque in 1876. In 1893, Madame (!) Troisvalets was still listed in the Almanach des Artistes of the year. 70 rue, Château d'Eau. I think the Madame might have been honorific. Elise is listed in the Jolies Filles de Paris, and appears in the odd anecdote... 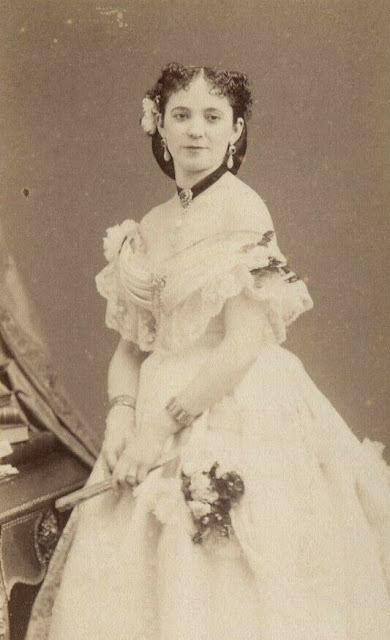 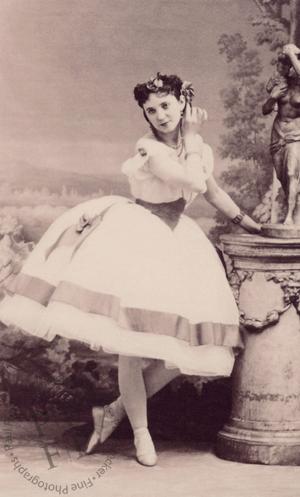 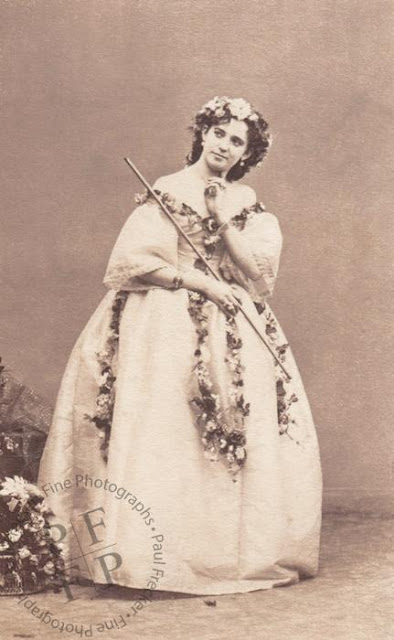 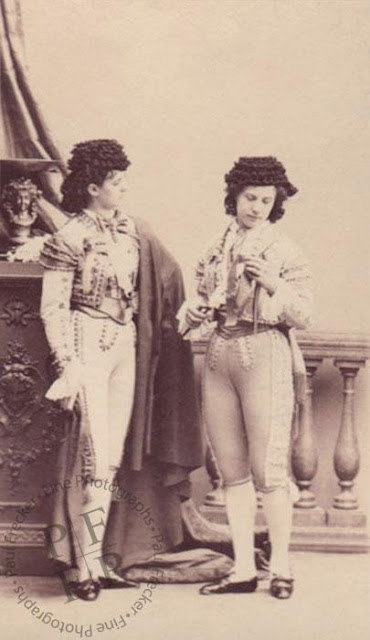 (?Clara) (?Caroline) Pierron began a little before  the two last named girls. I see her in already featured in Le Violon du diable and L'Enfant prodigue in 1850, as Euphèmie in Vert-Vert, and lastly in 1856, when she crossed the channel to feature at the Italian opera.
The reason I have a ? before her prénom is that I think it is an error which has become a 'fact'. She is only, to my knowledge, billed as 'Pierron' at the Opéra, often preceded in a list by 'Caroline' (comma). The 'Caroline' before the comma is, of course, our friend Caroline Lasciat. And just to muddle things further, there is a slightly younger Mlle Pierron, variously called Justine or Caroline (d 1924), who became a long-time dugazon and later character lady at the Opéra-Comique. However, the British press calls her 'Clara'. Or is that a comma job too? Anyway, it seems as if she might have stayed a while in Britain. In 1859-61, the Pyne and Harrison Opera at Covent Garden features 'Mlle Pierron' as second star danseuse....
There's a bit more work to do yet, sorting out 'Mlle Pierron'.

Adèle Villiers (Mme Villiers-Petit) was a much admired dancer, through twenty years on the Opéra stage. She started in the corps de ballet, by 1851 was getting featured moments (Zerline, Ballet des Nations, Le Rossignol, and within a few seasons was performing pas de deux and with the 'big four'. In 1856, although sh'ed been dancing some time above her 'classement', she was officially promoted from coryphée to sujet, and for the next fourteen years appeared as a practically permanent member of the team of sub-star ballerinas in both ballets (Le Corsaire, La Vivandière, Mario Spada, La Sylphide, Diavolina, Sacountala, Coppélia, Néméa, Les Elfes). She replaced Ferraris in the star role Pierre de Medicis, crossed to the Comédie Française to dance a pas de deux, danced Winter in the Seasons ballet in Les Vêpres Siciliennes, in Le Prophète, Dion Giovanni, La Juive, La Muette de Portici and Faust, and seems to have visited London's Princess's Theatre in 1859.
The authorial gentlemen of clubland don't mention her much, for she had one fault 'beaucoup de talent, ménagère de premier order'. First-class housewife. Madame Petit was married. 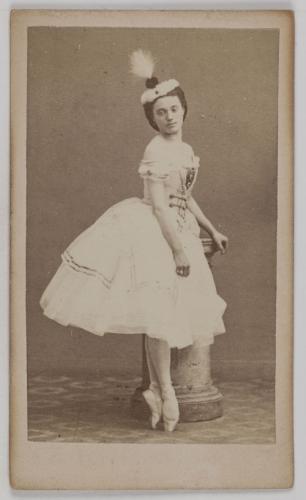 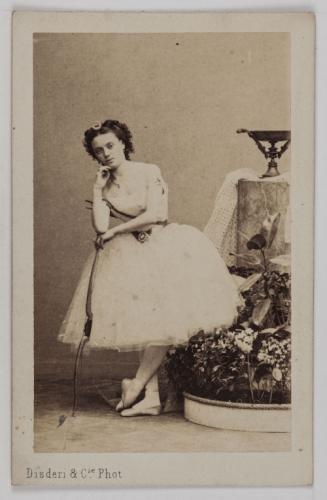 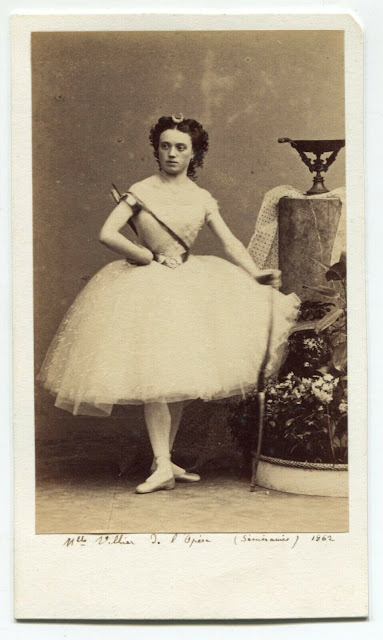 Maria Savel probably served the Paris Opéra, in a dancing capacity, almost as long as anyone. I see her in 1848, a member of the corps de ballet in L'Apparition, but she very soon moved up in grade though L'Enfant prodigue, Zerline, Ballet des Nations, Le Prophète, Vert-Vert, Giselle, Aelia et Mysis, a sujet in Gemma, La Corsaire, Sacountala ... she is listed as a sujet in the cahiers of 1860, danced in Le Papillon in 1860, Alceste in 1861, Giselle in 1862  ... I see her in La Maschera in 1864 ... but she is part of that 'retired' list in 1867. Her fine performances were duly noted, but of her personal life I can find nothing... 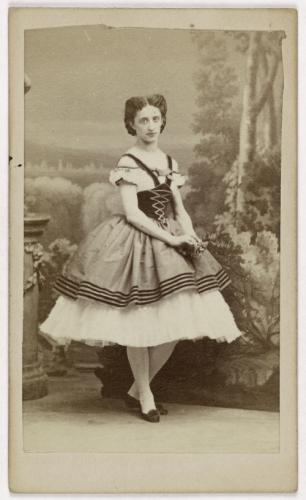 Léontine Rousseau was another of the slightly older guard, whose engagement went back to the 1840s. In 1857, she was summed up as 'Déjà coryphée depuis longtemps et toujours jolie, talent correcte, propre, jamais hors ligne, jamais médiocre' (1857). In 1859 she danced the role of 'le jeune elfe' in Les Elfes, in 1863 she was still there, described as 'plantureuse', in 1867 she was said to be 'retired'. 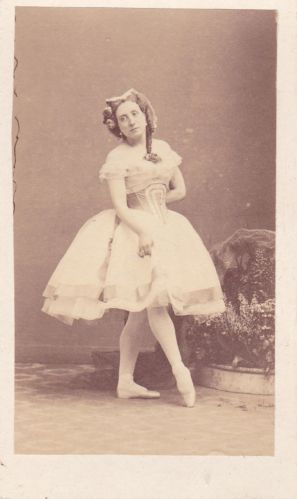 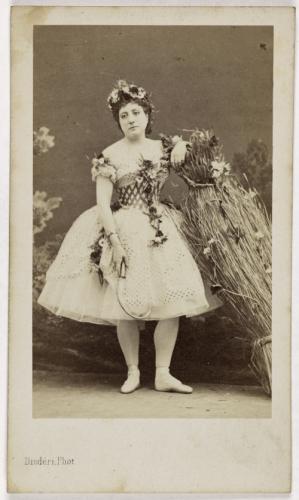 These Corsaire ladies, however, did not have the whole of the 1850s sujetdom to themselves. Lacoste, Luigia Taglioni (Mme Fuchs), Astory, Delacquit, the two Laurents, 'Mathilde' (which may have been Marquet 2), Olimpia Priora , Nadège Bagdanoff, of the newly fashionable Russian tribe, Fournier, Caterina Baratte, Carlotta Morando, Adeline Théodore, Eugénie Schlosser, Irma Carabin, Henriette Mathé, Françoise-Virginie Mauperin, Pauline Mercier ('demi-mondaine, mistress of Vicomte Paul Daru of the Jockey Club'), our pal Clara Pilvois, Annette Mérante, Augustine Stoikoff, Leontine Beaugrand .. I'll have missed heap, but let's go with some of these ...


Olympia Priora was apparently 20 years old when she came to the Opéra to compound the Italianisation of the ballet. She came from Bologna as a 'prima ballerina', but her employ in Paris, though much enjoyed, wasn't quite at star level. Between 1851-3 she led the support team behind behind Adelaide Plunkett, Régina Forli et al, appearing as Blanche in Vert-Vert et al to much praise for her 'talent incontestable' and 'les bravos de la salle entière', before moving on to fresh successes in Vienna, and then round Europe. 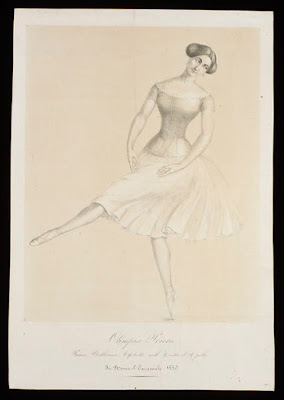 Most of the foreign or 'foreign' dancers who appeared at the Opéra were top-of-the-bill names -- Rosati, Fabbri, 'Ferraris' (Marie-Louise Eloy, femme Kowalski), Cerrito, Couqui, Marie Petipa ...

but some did join the company at a slightly lesser level:

Luigia Taglioni was another Italian visitor. A relation (aunt?) of the more famous Marie Taglioni, and a member of a very dancing family. I presume it was she who married the ballet master Fuchs, and ended up as the Comtesse Dubourg. She seems to have appeared at the Opéra for the first time in 1848 in Nisida supporting Mdlles Plunkett and Fuoco, before moving on after 1854. Dubourg died in a hunting accident ...

Piedmontaise dancer Carlotta Morando arrived in Paris, having already made something of a name in Trieste (1849), Milan (1850-1) .... 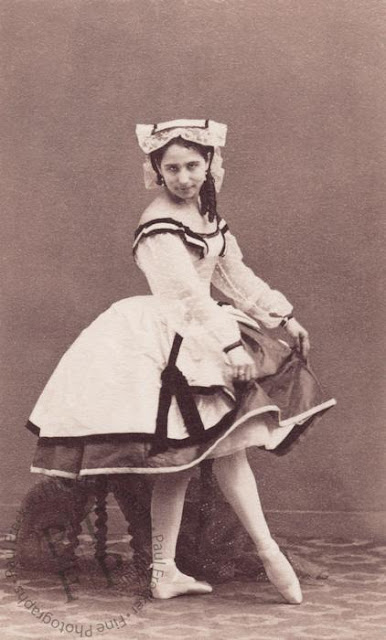 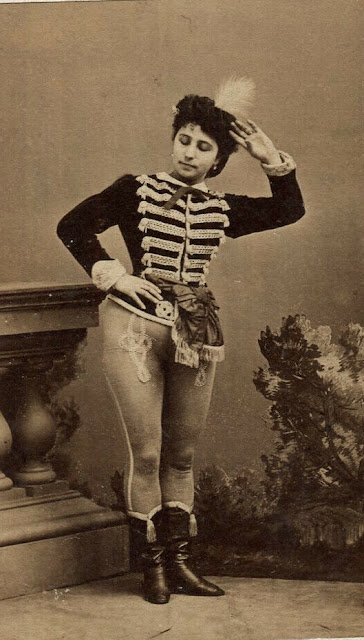 Caterina Beretta (or Baretta) (b Milan; d Milan 1 January 1911) has made the reference books, as after her dancing career was over she went on to become ballet-mistress at St Petersburg and at La Scala. The myth surrounding her has her birth date varying from 8 December 1839 to 11 November 1828 to 1840 (NYPL). Her career at the Opéra was of only three seasons, in which she was a well-liked sujet, after which she was allegedly paid a large sum to buy her contract out to make space for the Russian dancer Zenaide Richard (Mdlle Zina). 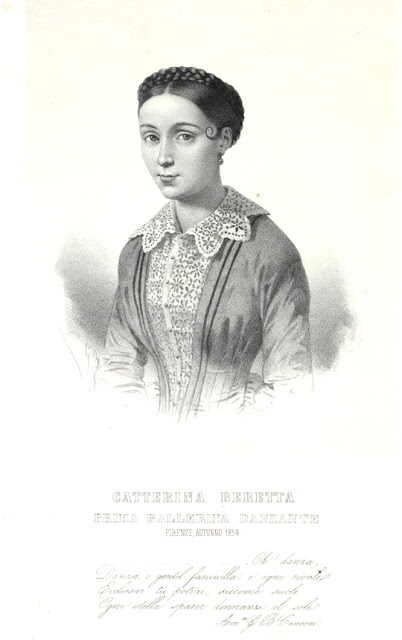 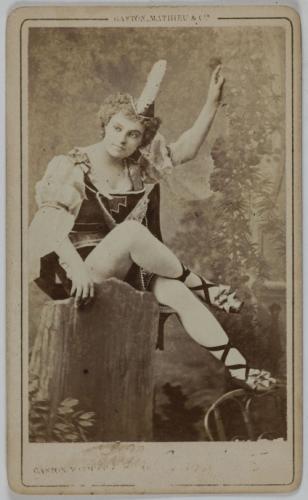 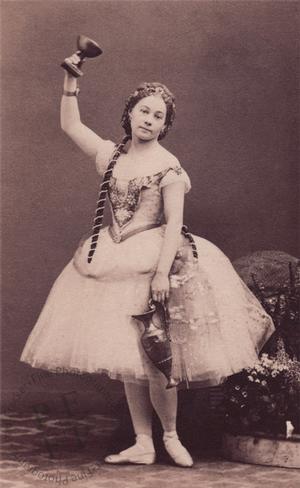 From Russia, also came Nadejda Bagdanoff, a pupil nevertheless of St Léon. She appeared as a sujet in the earlier 1850s. She seems to have made her official debut dancing Cerrito's role in La Vivandiere in 1851 and was judged 'promising'. The Italians press sniffed 'non manca ni di leggerezza, ni di forza, però manca di bog gusto'. I find several mentions of her in the various memoirs ... 'Nadejda Bagdanoff whose peculiar manner of appropriating to herself the entire stage did not obtain for her the good will of her companions of the dance. She was even accused of being a secret diplomatist sent over by the court of St Petersbourg..'. George Augustus Sala tells unappreciative tales of her in his Russian notes. She was better-liked at home, whither she was apparently obliged to flee because of the Crimean War. She appeared at Saint Petersbourg in support of Cerrito. In 1858 she danced Giselle in Berlin and subsequently made herself a reputation in central Europe. She seems to have retired in 1867. 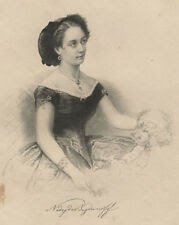 Mlle Céline Moïse, One of the Moïses sisters, dancers at the Opéra ...? 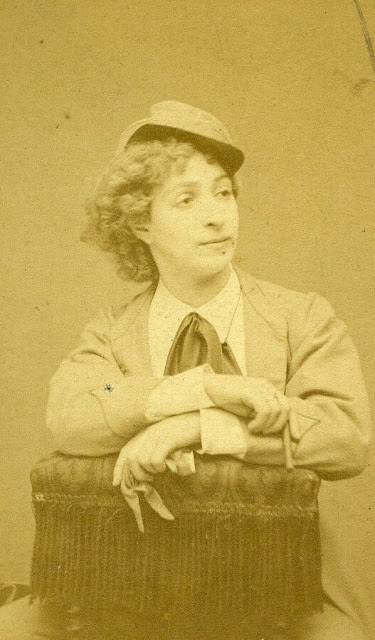 Here, alas, my computer took an unfortunate overdose of lamb juice and died, taking with it the screeds of notes I had amassed on the remainder of the ladies of the ballet.

Had it survived you would have had the stories of the sisters Louise and Eugenie Fiocre, Elise Parent ... 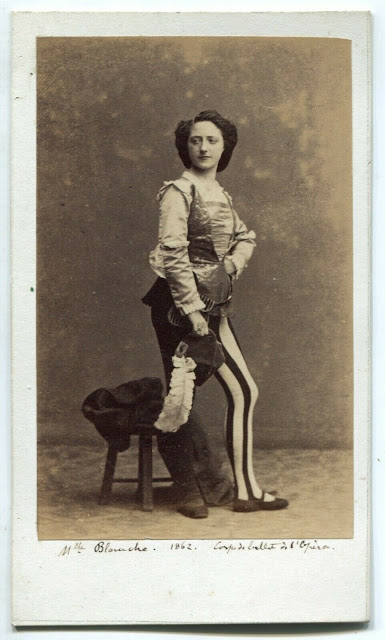 Ah! The gentleman who owned (and inscribed) these cards clearly had a considerable collection ... I think these English ladies are from the Porte Saint-Martin .. 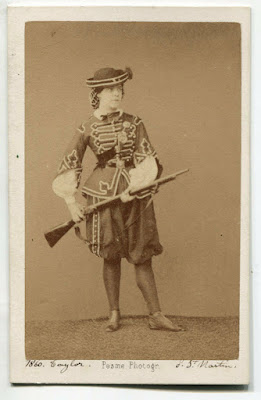 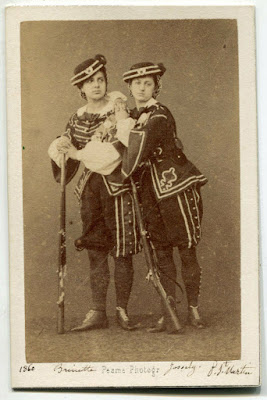 Posted by GEROLSTEIN at 4:03 PM