.
I came upon this photo earlier this week, during a momentary interest in chorus girls. What is it? 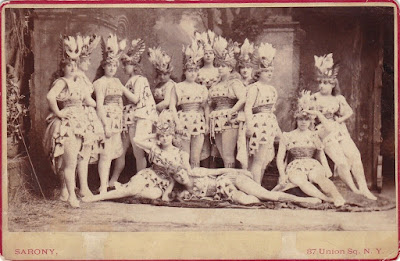 We have only one clue. The back is blank. Just the photographer's name.

So this is a bunch of chorines from an American show. Some time between 1871 and 1885, when Sarony was working out of that Union Square address. I would guess 70s rather than 80s.

So what in Olympus's name are those costumes? And the headgear? Valkyrie wings, Red Indian feathers. Chunky girls! 'Amazons' from one of the favourite pasticcio spectaculars of the time? Lassies from Vienna and Paris?  Ah, well, I'll find time, one day, to investigate. I got diverted towards the ballet-girls of Paris ...

I wish it were Act 3 of Princess Toto,but I doubt that it is.