Och aye! I'm the Queen of the May!

.
While I was sipping my ginger tea this morning, prefatory to getting out into the garden on a lovely, summery day, I had cause to look up my notes on Jimmy Rae of the Soldene company. Which led to a dip into Olive Rae of the D'Oyly Carte company, which led to ... the discoveries were not tonitruant, but here, in any case, are the results for those who love Cartesian minutiae.

Fast backward to the original production of Merrie England. Those who have seen the show or (like me) been in it, will remember the little role of the May Queen. The personification of village beauty and a spare soprano. The role was played, during the run of the piece at the Savoy by two successive vocalists, Miss Joan Keddie from Dundee and Miss Olive Rae from Edinburgh. I don't think the Scottish nationalism of the part was intentional, but it remains a fact that merrie England's May Queen was a Scot.

The first of the two ladies was Miss Keddie:

KEDDIE, Joanna [Paterson] (b Dundee 1878; d Glasgow 12 August 1921). At her death, the local paper acclaimed her as 'one of the finest sopranos Dundee has ever produced'. Joan was one of the children of Robert Keddie 'of Dundee and Calcutta', manager of the Samnuggar Jute Factory, and his wife Agnes Mitchell Paterson, and she began he working life as a pupil teacher at a local school. She also began singing as a teenager, and after some time as a member of the St Mary's Church choir, under S C Hirst, was quickly promoted to soprano soloist with the Newport (Dundee) Choral Society. I see her singing in Smieton's Ariadne and in Theodora as early as 1898. In October 1900 she is still in Dundee, singing at the Kinnaird Hall with J W Turner and Constance Bellamy, then with Durward Lely and Marie Titiens, but at census time April 1901 she is in Sculcoates, playing 'a bridesmaid' in Musgrove's Belle of New York company and covering Margaret Douglas in the title-role. The local press had already announced her as hired for the tour of Florodora, and as being engaged at the Savoy Theatre or alternatively in the Carte touring company. I see her as 'a peasant girl' in the tour of The Emerald Isle. In 1902, Joan was hired for William Greet's production of Merrie England. Quite why she moved on I am not sure, but shortly afterwards (10 January 1903) she married a member of the Belle and Carte companies, baritone George Daniel Washington (MD HU USA). It does not appear to have been a durable marriage. 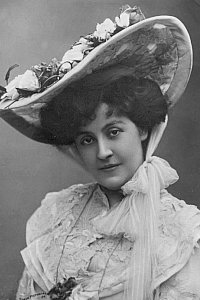 Her name does not appear on the London bills again, but she apparently covered Evie Greene as The Duchess of Dantzig (although Kitty Gordon and Elizabeth Firth succeeded the star), played Signorina Tasso in The Cingalee, and went on tour with The Talk of the Town before putting an end to a professional stage career and returning to Scotland, where she acted, henceforth, with the Dundee Comedy Club and sang with the local musical societies. In 1914, she appeared in Oh! Oh!! Delphine!!! for Eade Montefiore, but seems to have 'retired' definitively following a second marriage to James Taylor and the birth of a daughter.

If the career of Miss Keddie was brief, that of Olive Rae was even briefer:

RAE, Olive [Margaret] (b Madras, India c1878; d Edinburgh 1933) was another product of the Scotsman in India tribe, but not of the jute mills. Her parents were the Reverend George Milne Rae DD of Madras and his wife Janet née Gibb. Her first public appearances were in Oxford, her first in London was at the Salle Erard (27 February 1900) in a recital of her own ('fresh, clear soprano .. much taste .. great distinctness'). She appeared at the Steinway Hall and the Derby Temperance Hall with Sydney Poyser, with the Bath Orpheus Glee Society and in several other provincial venues before venturing on to the stage in Merrie England at the Savoy and on tour. 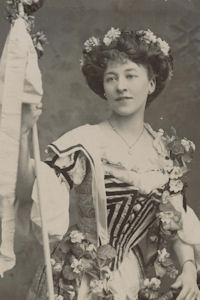 She went on to appear as Titania in The Princess of Kensington, Lady Violet in The Earl and the Girl and The Princess Whom He Married in Little Hans Anderson before returning to the concert platform (St Andrew's 1909) and life as a vicar's daughter. Unless she was the Olive Rae who played Doris Bartle in Peggy (1911) at the Gaiety Theatre ...
She died, unmarried, in 1933.

The tradition of a Scottish May Queen was not continued with. In 1951 the part was played by one Gladys Cooper and at Sadler's Wells by Ava June.

Posted by GEROLSTEIN at 2:05 PM

She was back in London in 1911, but the role in Peggy was played by Olive *May*, a Gaiety Girl who appeared in several Edwardian musicals.

Here's something interesting. That Olive May is linked (incorrectly?) several times in Wikipedia to this American stage actress: https://en.wikipedia.org/wiki/Olive_May

But they are not the same person, right? Do you feel like looking into the British Olive May?