Bumby of the Bull's Head, Sale. A boozy tale.

I have enjoyed doing this little piece. A nice change from my deeply serious theatrical biographies.

As usual, it started off on e-bay. Still slightly asleep, and partaking of Flick’s eye-opening Botero coffee from the Sandbar Café, next door, I cruised past a photo labelled ‘Maggie Bumby of the Black Bull..’. At least, that’s what I read. The Black Bull? My way-backest Scots ancestor ran the Black Bull at Dyce, Aberdeen! But that was 200 years before photography and anyway, I’d read – as one does – what I’d hoped to see, not what was really there. It wasn’t the ‘Black Bull’ it was the ‘Bull’s Head’ in Sale, Manchester. But by that time I’d taken a fancy to pretty Maggie and decided to investigate her a little. Here she is … 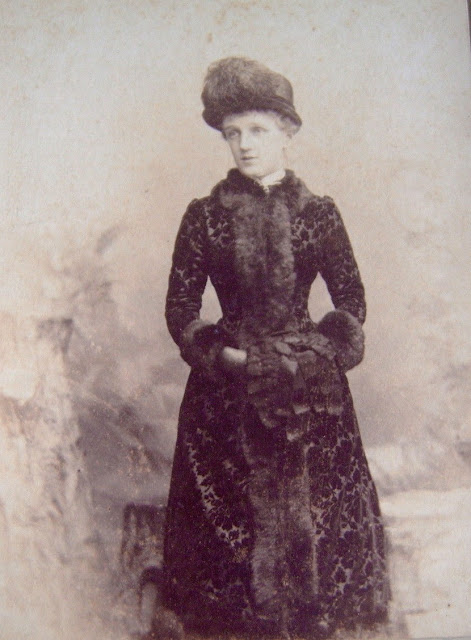 Maggie Bumbv, barmaid at the ‘Bull’s Head’. But not just the barmaid, the pub-keeper’s eldest (?) daughter. We’ll get on to the question mark later.

Thomas Bumby was a Pendleton man, born in 1841 and bred, the son of John, a cotton-weaver and his wife Sarah, of 3 Borough Street. He worked initially as an ‘overlooker’ and a warehouseman, he married local Caroline Clarke in 1864, and they began a Victorian-sized family. Maggie arrived a few months after the marriage (17 November 1864). Oddly, there seems to be another daughter (his? hers? theirs?), Cissie, pre-dating the marriage who doesn’t appear in the records… but there were plenty of children thereafter. William, Elizabeth Ann, John Frederick (born ‘an idiot’), Annie, Clara, Walter, Tom, Christopher, Carrie, Percy …

Now, when one finds a photo, such as that of Maggie, on e-bay, one always does a search for the photographer for ‘unidentified’ folks from the same source. And look what I found! Eldest brother Willie (x Charlestown 25 March 1868), Willie: the only one of the family who disappears from my ken after this photo. I must search Australia. Ah! It may be Canada ... 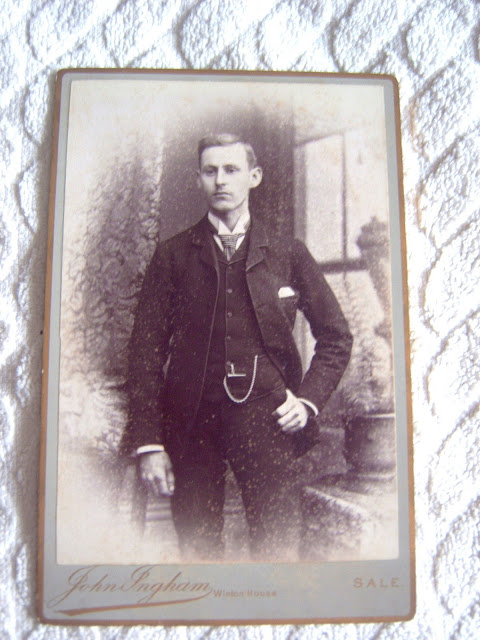 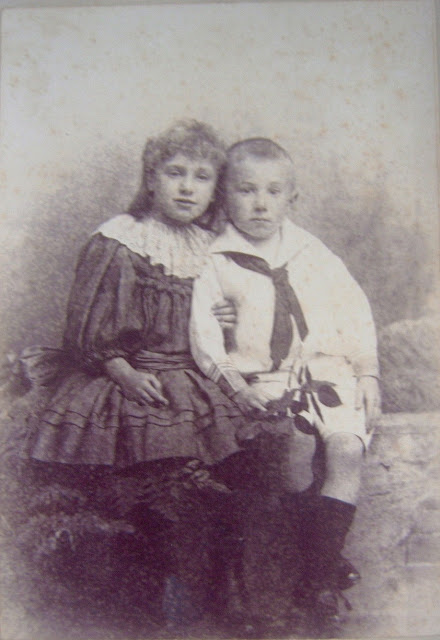 Thomas clearly got tired of ‘overlooking’ and he got into the booze business. In 1871 he is at 9 Ellor Street as a ‘beer retailer’. There were a few of those around, it has to be said! At no1 of the same street a Mr Purcell was retailing beer as well, and Timothy Henshall’s Butcher’s Arms wasn’t far away. In 1873 and 1876 Thomas was retailing his beer from 2 Railway Street, Brindle Heath, but it seems to have been 1879 when he took over the Bull’s Head Hotel at no 2 Cross Street, previously the fief, for seven years, of a Mr Robinson. This photo of the building has 1879 on its pelmet, so did he rebuild? 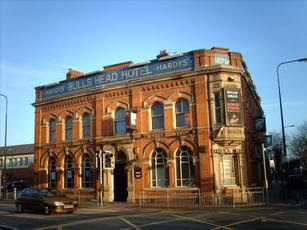 Anyway, the Bull’s Head proved solid, as the area around it was pulled down or blitzed ... it’s always the pubs and the churches that survive! ... and eventually Thomas would hand it over to his son, Tom … It was said that he had run it for 33 years, but I think that may be an error. I think maybe 23. Anyway, long enough. Thomas died in Blackpool, at Highfield, 108 Waterloo Rd, on 9 November 1909. 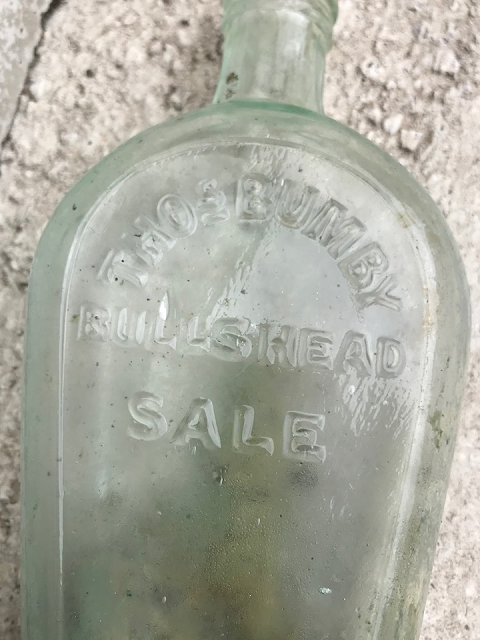 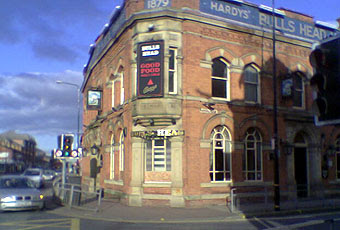 I see the widow Maggie in 1939, living at 1 The Grove, Thornton Cleveleys with her brother Tom, now a milk and cream salesman, and Lillian his wife … But the Bull’s Head carried on, after the father and son Bumby had finished, and the ‘developers’ had had their ghastly 1960s go at the surrounding area. It’s still there. Yep. Pubs and churches survive! No2 Cross Street might have a tacky highway before it, these days, but it’s still the Bull’s Head. Still active.

And I hope they read this! These photos (photographer: J Ingham of Sale) really belong on their walls.

William b Pendleton 1868 x Charlestown 25 March 1868. Educated Knutsford Inferior. Could he be the WB of the Supply and Tender Board died at Malvern, aged 60 28 March 1919.  No. The age is wrong. Seems to have emigrated.

By the way, the vendor of these great 'local history' pictures is Barbara8644 in Darlington, England. They are just a few pounds each ...

Thanks Barbara, for a nice wander through C19th Lancashire.

Other photos by Mr Ingham on today's ebay included these:


Post-scriptum: thanks to this wee piece, the photos have found their way back to the Bull's Head, and now adorn its walls.  Hurrah!  And these have come back, from the local archives 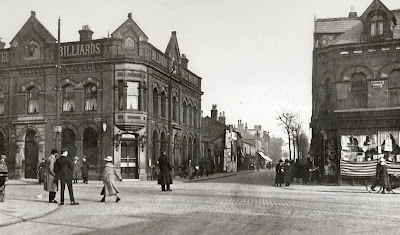 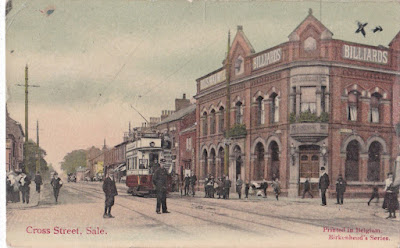 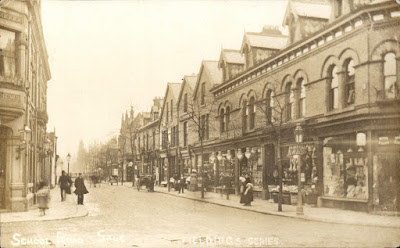 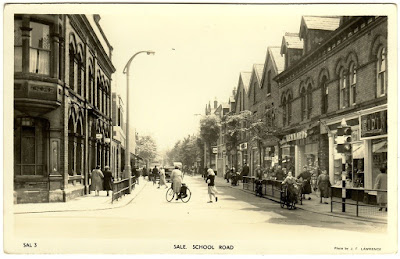 Posted by GEROLSTEIN at 4:37 PM

Great stuff. Good work. I am very familiar with the Bulls head as I live in Sale. Just started to do a bit of research on the Bumby family so was amazed that you had photos.

Just a further update. It appears that a friend of mine purchased the photos from eBay. He framed them and donated them to the Bulls Head.

How wonderful!!!!!! I'm glad my little piece led to them finding the home they belonged in! Kurt

Tried to email you without success, please could you email me if possible.