.
Ethel Pierson. A short life but a glad one. Her name is a familiar one to me, and I’m sure to most fans of the Savoy operas, because in the 1880s she covered Great Britain singing the leading soprano roles in some of the greatest shows of that era. And that in spite of repeated bouts of ill-health which, I am guessing, contributed to her death, aged 29, from influenza, leading to bronchitis, leading to ‘rapid consumption’.


Ethel, of course, was not Ethel. I’m not quite sure what led to the sudden popularity of the name Ethel in, mostly, the 1870s, but our ‘Ethel’ was born, seemingly, in 1862. I say ‘seemingly’, because her real name was Margaret Paterson and she was born in – so she said in one census – in Glasgow. In another, she said she was born in Liverpool. So with no other clue than the fact that her mother, too, was Margaret Paterson … I leave it there! Too many Patersons and Pattersons. I’ll plonk for born Glasgow, brought up Liverpool. But who knows.

Somebody has said that she began by singing in concert in Liverpool. Well, I’ve looked. Under Paterson and under Pierson. And unless she’s the Miss Pierson playing piano at Framlingham in December 1876, I don’t see her. Anyway, she would have been a child. She was still only fifteen or sixteen when she made her stage debut. Where? Under Mr D’Oyly Carte (unofficially) in London’s West End. Carte, who was managing the Opera Comique for the Comedy Opera Company, was also masterminding poor Charlie Head’s efforts to revive his Philharmonic Theatre, Islington, after the departure of its big drawcard, Emily Soldene. The superb French opérette Le Petit Duc was glowing on the horizon as the next big hit in the musical theatre world, so Charlie (to whom, at this stage, money was no object) bought the English rights and staged it at his theatre. It bombed. The publishers snatched the rights back, largely recast the show, and re-staged it at the St James’s Theatre. Alice May retained the role of the little Duke, but the role of his very young Duchess was re-cast. Who was this 16 (?) year-old ‘Ethel Pierson’?

Whoever she was, she was liked (‘just that spirit and so much of the taste that, taken in combination, are so valuable or comic opera’, ‘charming and fascinating’) in a restaging that wasn’t otherwise much better cast or staged than Charlie’s. And didn’t run.

Anyway, little Miss Pierson wasn’t slow to find another job. She zoomed off the Dublin to play in the Theatre Royal panto Gulliver as someone called Malevoli. Doubtless with a song. In Dublin, you were expected to play anything, and I see Maggie appearing as Grace Curry in The Chimney Corner, Agatha in The White Horse of the Peppers, Emily Mervyn in Partners for Life …but that was not the way that she was to go. For her next job, she was hired to play Josephine in HMS Pinafore for Mr Carte on the British road.

She played the role to great satisfaction from June to Christmas, when she took time out to appear as Cinderella at the Prince of Wales, Liverpool, and then it was back to Carte for a long run of Pinafore, Sorcerer and Patience … then a break, due to her ‘constitution’. However, she was back at Christmas, playing Cinderella at Nottingham (‘I know my love is true’, ‘Dreaming’). She was prescribed another rest, but by May 1883 she was back, playing Gertrude in a London production of Prince Methusalem under the management of the B-Grade Francis Fairlie. And this Christmas, she took her Cinderella to the Grand Theatre, Glasgow.

In 1884, she was seen mostly in London, playing Alice Fitzwarren in the musical Dick (try calling a show that these days) at the Globe and again at the Empire before she emigrated to Leeds for the pantomime Bo Peep. The musical director/composer of the show was a certain young J Sidney Jones, and two of his panto pieces (Bo-Peep valse, and the cigarette song ‘Whiff whiff’) were published with Maggie’s portrait on the front. Anybody got them …? 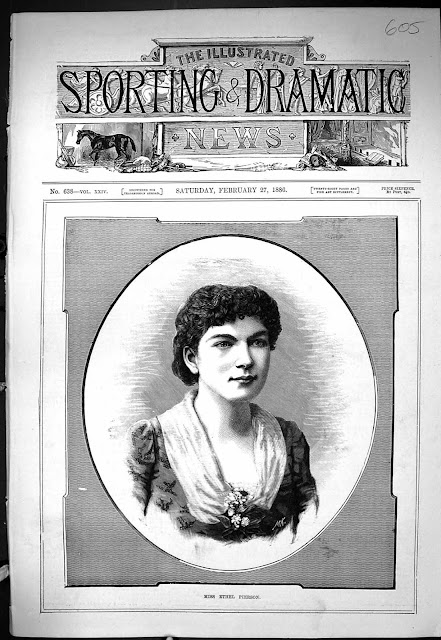 In 1885 she played in a second-rate musical, Dr D, with Emily Cross at the Royalty Theatre, and then re-joined Carte to take The Mikado round Britain. She Yum-Yummed for eighteen months.

It was her last Carte engagement. I presume there could have been more but … there weren’t. She appeared as Geraldine in two tours of versions of the not unsuccessful Count Tremolio (‘Pretty, pleasant face and a fresh sweet voice … She has a delightfully quaint way of uttering an absurdity .. and she sings like a consummate artist’), she visited Liverpool as Aladdin, and in late 1888 she took over the title-role in Erminie from Esme Lee, and toured it into 1889. Another star role in a hit musical.

The following years she was a little less in evidence. There was more talk of ill-health, even though she continued to advertise for work. She sang on the Clarence Esplanade Pier in Portsmouth in an (already!) gems of Gilbert and Sullivan programme, she played for Charles Wibrow in the role of Frédérique in the opérette La Girouette, she starred in Jakobowski’s Paola, returned to Nottingham – which had claimed her for their very own – as Sinbad and to Huddersfield as Aladdin …
And then she got the flu, and died at 38 Hart Street Bloomsbury 5 February 1892.
Maggie was, I should say, a married lady. Her husband was Frank Edward Randell (spelt thus). Frank came from a well-off family in Reading and was described in the census as a ‘mining engineer’. He’d been married in 1879 to a Miss Allice or Allace Seymour who had died from marriage or its consequences the following year. She was buried in Brighton. And so was Maggie, whom he had married just over a year later. What’s the Brighton connection? Frank died in 1898.

You don’t even have to read between the lines to know that Maggie was a sweet person (Nottingham insists on this), a pretty good lightish soprano, a charming actress … a veritable light comic opera leading lady. What she would have become at an older age … well, maybe a very happy Mrs Randell. As it was, she became a star forever in Nottingham, where forty years after her death she was still remembered in the papers …
Posted by GEROLSTEIN at 12:43 AM