Madge Stavart has come into my life before.

She played at the Gaiety Theatre with Emily Soldene, briefly, so she makes an appearance in the pages of my In Search of a Singer. But Madge spent many more months and years working for Mr D’Oyly Carte than for Emily, so I thought I had better look into her properly. I mean, ‘Madge Stavart’ had to be her real name (who would choose it?), so the facts and figures ought not be difficult to find.

Well, the reason that there was no article yesterday was that I spent the entire day trying to solve the ‘who was’ of Miss Madge Stavart. For that was not her real name, at all. Not by a long way. Did I solve it? Half. I can tell you when and where she died, and under what name. I can tell you where she was born, but … well, she was calling herself something different then, and I’m fed up with trying to put salt on her tail, so I’m going off half-cocked in the hope that someone else may work out her truth … (addendum: they did!)

‘Madge’ first came to theatrical notice at what was said to have been seventeen years of age (she was 22) as a ‘clever, vivacious’ Denis in the panto, St George and the Dragonat Manchester’s Theatre Royal at Christmas 1872. There, she came under the eye of Mr Henry Brougham Farnie, and when Angelina Claude took time off from the leading role in his hit musical Nemesis, it was Madge who was whisked into her London debut (7 July 1873) as Rosalie Ramponneau (‘a young lady who has been well received in the provinces made her first appearance in London at the Strand...) for two months. From there, it was the Gaiety to play Charles Martel in Geneviève de Brabant (‘good looks intelligence and very agreeable voice’), and off to another Gaiety, in Dublin, to play Prince Amabel in Turko the Terrible, alongside Annie Sinclair (‘My Mary of the curling hair’).

Panto done, she went on the road as Clairette in Joseph Eldred’s La Fille de Madame Angot company before returning to town to feature as Medor in a sloppily mounted version of Hervé’s Les Chevaliers de la table ronde. The production may have dreadful, but the cast was quite good: Mr J H Ryley and his wife were beginning their transformation from ‘Dancing Quakers’ into comic opera players, and they were supported by one Fred Sullivan. 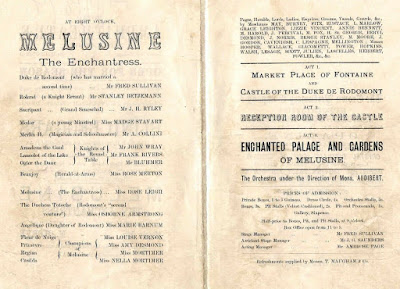 Christmas 1874 was spent as principal boy at the Liverpool Prince of Wales (The Invisible Prince), before what seems to have been a less interesting few seasons in which, apart for her 3-months chunk of annual panto (King Arthur in Twinkle Twinkle, Little Star at Manchester, Sinbad at Birmingham, Prince Bonbon in Sleeping Beauty at Manchester, Robinson Crusoe at Liverpool), I see her only at the Alexandra, in concert in Margate and playing Clairette and Wanda for Elliot Galer at Leicester.

She would later call herself a widow, so maybe this was when she was being married.

In 1879, she was back in view playing Polly Peachum to the Macheath of Frank Celli in Birmingham and London, Feramoz in Lallah Rookh in Plymouth and advertising for a pantomime. But she wasn’t going to need one. Mr Carte hired her for a few weeks of Little Buttercupping at Birmingham, and when that was done, transferred her to the Opera Comique production, to cover Buttercup and play Mrs Nankeen Worcester in Cups and Saucers. After a couple of months she was again transferred to the road, playing Buttercup and Lady Sangazure for the next fifteen months. And after a little break for illness (or salary increase?) she joined up once again.

1881 was of course census year, the company was at Preston, and though many of the company don’t seem to have been censused, Madge was. As Madge Stavart, aged 26, born London. Huh! And look, with her is Mrs Henrietta Stavart, 60 born … India! Well, I wasted a lot of time on the Indian lady. If Madge was born in London in 1855, I would expect to find mother and child in the 1861 and 1871 censi. And I can’t.

The Pirates of Penzance was added to the repertoire, with Madge as Ruth, before a little break. It was paragraphed that she was to play Lady Betty in Claude Duval but she returned briefly to Carte before leaving to take the role of Buttercup in the disastrous attempt to stage The Wreck of the Pinafore. It closed after four nights.

She played Queen Isabella with Richard Barker’s Manteaux Noirs company, joined Ethel Pierson in London’s Prince Methusalem and did one more round as Buttercup and Ruth before, on 8 September 1883, she played her last performance in the Savoy repertoire.

Not yet thirty, she was next cast in the plum role of Palmatica in the vast Alhambra production of The Beggar Student (12 April 1884), played Christmas as the Queen in the extravaganza Ching-ma-ree at Brighton. She went down well in Brighton: the following year she played Cups and Saucers and sang the Rossini Stabat Mater there ..

When Les Manteaux Noirs was revived at the Avenue Theatre she was again cast as the Queen, but the next month she was seen in Battersea Park singing ballads alongside the exhibition of the ‘Blondin Elephant’ and ‘extraordinary jumping feats, twice a day’ by a lady who could manage 6 feet. She seemed to have taken a turn for the ballads, for she followed up at Hastings’s Pier Pavilion, the Eastbourne Floral Hall, the Brighton Aquarium, the Royal Aquarium with the Vaidis Sisters on the Revolving Trapeze, the Palace of ten-thousand lights, and Miss Nydia Bleiken and her French chansonettes …

She played Martha in a Mephisto which topbilled Connie Gilchrist, returned to Manchester for the 1886 panto Bluebeard, and went again on the road with Les Manteaux Noirs, as Bianca in two versions of Count Tremolio, as Lady Alicia in Marjorie … and Marjorie’s producer, Carl Rosa, engaged her for a single performances as the Marchioness in La Fille du régiment given at Balmoral, but now the advertisements for ‘Miss Madge Stavart, disengaged’ were becoming rather frequent. My last sighting of our lady is playing a musical sketch, The Jabberwock, at Gatti’s Music Hall in December 1897 and the advertisements stop at the end of 1900.

But they had one advantage. They had given an address. Brooklyn Road, Shepherds Bush. 16? 12? Now, looking for a place in Shepherd’s Bush is like … well … looking for a shepherd in a bush, because according to the census takers and transcribers, it doesn’t exist. It’s just shoved in, latterly as part of Hammersmith. Happily, however, as a young singer, I briefly lived just down from Shepherd’s Bush Green, so I knew to follow the Goldhawk Rd. When I could find it. 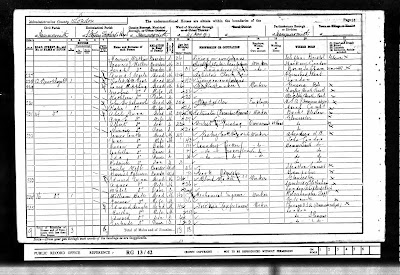 That’s what took the time. I finally lighted on 1901. George A Highlander actor and his wife at number 1, Florence Perugini, actress … but at no 16 were a mechanical engineer and a confectioner’s foreman, and at number 12 an elderly cabinet-maker named Wippling and his family. No Henrietta. No Madge. Oh. There are three apartments at no 12. A widow ‘living on own means’ aged 43. Violet H M Rowe. H? Henrietta? M? Madge …

Not quite. Violet Henrietta Mary Rowe. It is she. She had simply retired. Violet I can now tell you died 28 Marloes Rd, Kensington 5 March 1921 aged 66. And she appears living with a lady friend, Selina Baker, in the 1911 census at 2 Benbow Road … where Violet tells us that she was born in the parish of All Saints, Margaret Street. Yes, dear, but under what name? And who and when was Mr Rowe? And what happened to Mamma? And Papa, for that matter. And why ‘Madge Stavart’? And was Mamma really born in India?

Lots of questions. But I’ll leave them to you. I’m Madged-out …