Today, I am not a happy historian. Today I discovered that I may have made two errors in my published works. So I went and had a big massage and a huge Turkish lunch at Yamba’s fabled Beachwood Café, and titubed home about two pm for a nap …
But I couldn’t snooze. I was …  I needed to get things right.

So. The first one. I did pretty well in David Stone’s first G&S challenge. Two out of three? So I bullishly asked for a second round. The first of the second trio, the Montellis, you had yesterday. The second was ‘George Olmi’. Well, I asked!

I knew about ‘Signor Olmi’. He made a brief appearance in my big Emily Soldene biography. A fair, but hardly exceptional, American baritone, who worked his way through nearly thirty years on the stage. ‘American’, that’s what I said. He wasn’t. He lived most of his life in America, wed and bred (not in that order, I think) there, died there, but he was born in the lovely British city of Worcester. Obviously, not as Signor Olmi. So, here, to exculpate my error, I give the true story of the gentleman in question.

James Holmes Baxter was born in Worcester 18 December 1852. His father was Thomas Baxter, a schoolteacher at the local school and cathedral, his mother, Mary Ann West née Holmes. James was, naturally, educated at the cathedral school, with, I am guessing, all that meant in the way of juvenile musical education.

As a teenager, he was as locally celebrated for his cricketing and footballing skills as for his nice baritone singing with the St Clements Choir (‘The wooden walls of England’, ‘When sorrow sleepeth’, ‘The Diver’) and his acting with the local amdrams (Langford in Still Waters Run Deep). But after 1873, I spot him no more in Worcester circles. He has, apparently, gone to Italy (as one did) to have his voice trained.

He never said where, by whom, or whether he actually performed in Italy, and I haven’t delved, but in 1878, Mr Carl Rosa, returning from one of his talent-spotting trips to Italy announced the hiring, for eight months, of young Signor Olmi. The Figaro snorted…

So, Mr Olmi-Baxter came home, gave a concert for Mr Spark at Worcester (19 December 1878) and was launched on his operatic career with the Rosa company. Well, ‘launched’ is probably putting it a bit lavishly. He was cast as Colonna in Rienzi(‘a minor part .. satisfactory’) and … er… was that it? But he would remain Mr Olmi ‘of the Carl Rosa’ for many years.

He appeared in the odd concert (‘hardly what might have been expected from a member of Her Majesty’s Opera Company’. Naturally good voice .. lacks animation .. no particular effect’), before he got another operatic job with Blanche Cole’s company at the Standard Theatre  and the Alexandra Palace (Count in La Sonnambula, Faust, Lily of Killarney&c). He took the role of Escamillo in Selina Dolaro’s Benefit, and then landed a plum job playing the same role in Emily Soldene’s touring company. The company also played The Naval Cadets in which he played Januario and … well, details in my big Soldene biog. Details also of the company’s trip to America and of you’ve-never-had-it so-good Olmi’s surprising defection from the company in Philadelphia.

Was it a woman? A notice from Decatur in January 1882 mentions George Olmi ‘and wife’. He fathered a son, Arthur, the following year. I don’t know. Or, honestly, care. But Jimmy Baxter never went home again. He led an adequate career in America for another quarter of a century, a career of highs (few) and lows (more) which I’m not going to attempt to give anymore than a selection.

After touring a while with Emma Abbott, he was taken into the company at the Bijou Theatre, NYC, where he played Robinson Brownjones in Teddy Solomon’s Virginia and Gaetan in Le Coeur et la Main, and then headed back to the touring circuits ridiculously billed as ‘who has been singing at the principal London, New York and Boston opera houses’ with the troupe of juvenile prima donna, Fay Templeton (Olivette, Gillette de Narbonne, Rosita &c).

In 1885 he played Captain Corcoran in a second-rate HMS Pinafore at Asbury Park, went touring with the B-grade Pyke company as Pooh Bah, but then got hired by John Stetson for another Mikado. John Brocolini was Pooh Bah, Olmi was Pish Tush. 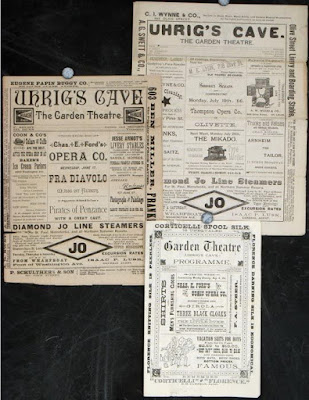 1886 saw him at the Uhrig’s Cave summer theatre, before he won another good job, with John McCaull’s classy touring company. He played in The Mikado, Ruddigore, The Crowing Hen, Lorraine et al, before McCaull retrenched a bit, and he was no longer needed. Instead, he turned up at the mecca of comic opera: New York’s Casino Theatre. The Casino would employ him fitfully over the next few years, in good parts and tiny (Erminie, Nadgy, Meryll in The Yeomen of the Guard, Falsacappa in The Brigands, The Brazilian, ‘an officer’ in La Fille de Madame Angot) as he covered the country .. Fatmah Diard’s summer opera at Little Rock, a spate as Sir Marmaduke in The Sorcerer, Boum in La Grande-Duchesse, a time at the San Francisco Tivoli, where he won his biggest headline for battling the police ‘with his enormous dogs’ when they came to repossess his furniture.

Thereafter, all is very much downhill. He and his ‘wife’ and son can be seen in 1902 in a fourth-rate dramatic company playing one-night stands, touring the Pacific coast in a similar outfit, in suburban stock in St Louis and in Kansas City ... 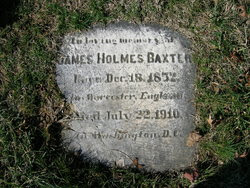 Jimmy Baxter died in George Washington University Hospital, Washington DC, of a cerebral haemorrhage 22 July 1910. His wife, ‘Beatrice Gordon’ (seemingly Ada Goodinow married 10 July 1907) is still in Washington in 1921. Son Arthur who the Findagrave website tell us hopefully, was a ‘stage actor and manager, who started his career in the west and had his own acting company’, died in Brooklyn 12 February 1927.

And that’s a taste of George Olmi. Who WASN’T American … Mea culpa.

Posted by GEROLSTEIN at 1:35 AM