OK. I said Werther was to be my last operatic outing for the season. OK. I said that I needed time off from ‘modern’ music after suffering the minimalist agonies of Steve Reich at Radialsystem. But … last year I added just one more outing to my intended schedule, a wee half-hearted trip to the Tischlerei, and I was there rewarded with the best fun night and the best performance I’d seen all year. So, it seemed silly not to try again: especially as ‘the Queen of the Tischlerei’, Miss Alexandra Hutton, was again on display. So off I headed, in the company of two active composers, for the studio of the Deutsche Oper to see Love Affairs: four new one-act operas.

New? Well, they were being performed for the first time. I’m not an expert in quasi-modern music and, for a while, the music of the night flowed past me not disagreeably if rather unmemorably: but alas! The four operas were by just two composers, so we had more and more of the same, and ten minutes into the second half I had my chin in my hands. It was the only way to sit, really, my buttocks were painfully perched on a rocky cardboard box. Does ‘modern’ = ‘uncomfortable’? 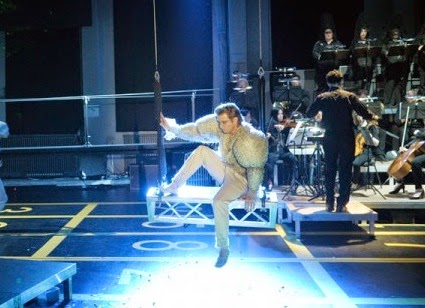 Number one was a (very) lengthy solo scena sung by the Nightingale of Wilde’s The Rose and the Nightingale, to dance decoration representing the rest of the story. How do you stage the soloist’s role in such a thing? Poor Gideon Poppe who sang the music of the Nightingale quite beautifully was left to run from one corner of the stage to another ... I wish he had just sat on his swing and sung, with his tasty quartette backing-group … 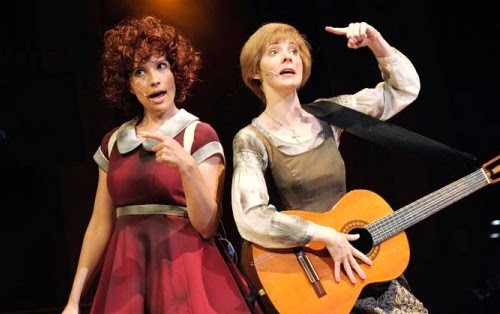 Number two was entitled ‘Musical Land’ and was based on the delicious premise of Cataclysm in the Land of the favourite characters of familiar musicals. ‘Mary Poppins is dead’ is a grand opening announcement!  We had Maria von Trapp (Alexandra Hutton), Evita (Laila Salome Fischer) and Orphan Annie (Christina Sidak) escaping from the wreckage into … a storyline that only fulfilled some of its promises. But the piece provoked some real laughs – in particular when direct parodies of Julie Andrews (hilarious!) and Elaine Paige and their material were on show – and I liked the opening trio, too, when the three women actually got to sing together.

At half time, my two composers were seriously glum. I, who had sat through the Radialsystem stuff so recently, less so. I’d enjoyed the singing. But my backside hurt. Maybe the second half would be more musically original... more, well, something. Interesting?

Number three was an operatic piece based on – oh no! – Querelle de Brest. First Wilde now Genet? Querelle de Brest was a ‘naughty book’ in a brown paper cover when I was young. Now it’s feeble stuff (well, it always was). Recently, my brother and I were asked to become the new English translators of Genet: we started the exercise, we shuddered and we withdrew.
Querelle is little more than a voyeur’s Billy Fud, homosexual ‘thrills’ in pretentious language for the over 70s. What Billy Budd implies (or might imply), Querelle blurts all over.
So, built on this unpromising material, we have an opera: with all the sailors cast with women. Yeah. Shades of Billee Taylor (1880). 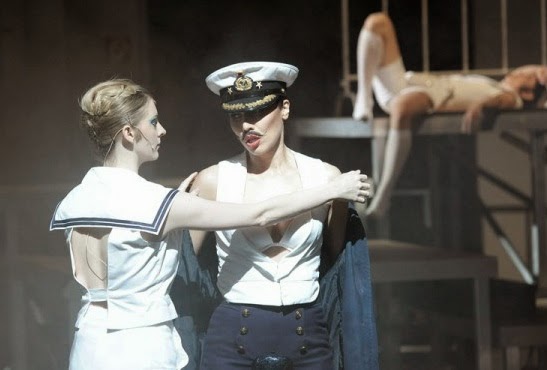 The only redeeming graces of this seemingly never-ending piece were the singing of those young women – in particular, the richly vocal Katarina Bradic – and the display of technical skill, by many more people than appeared on the stage, in synchronising the two video screens with which the singers interacted. Broadway be damned: here was a show where you went out singing the scenery!  Well, I couldn’t find much else to sing. I cordially disliked the 'opera'.

For number four we had another old-fashioned gimmick: the piece with movable musical parts. I’d been pulverised into a state of catatonic gloom by number three, so I didn’t take much trouble to follow the text. I just took in the disastrous scene-change, shifted uncomfortably on my bony box, and peeked at my watch. Goat? Donkey? What was that about? Well, I survived Fall thanks to a star performance by Jörg Schörner as a burlesque Queen, yodelling out his music from behind a gruesome make-up, like something out of Bombastes Furioso. I don’t think a man exists alive who could have done the rôle as well. 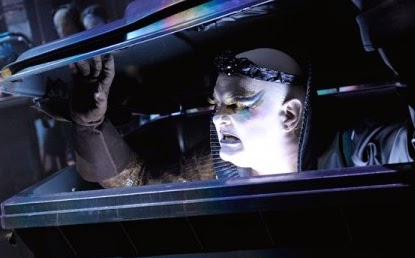 His partner, Bini Lee, sang her frills and trills like an escapee from Le Coq d’or charmingly … but I regretted that the pair of them played from a high balcony which caused me to add a crick in the neck to my other sore bits.

It was a long night. An uncomfortable night, in more ways than one. I was saved from despair (most of the time) by the grand voices and splendid performances of the young singers. Well, singing is my thing. My two composer companions (one flown in from Paris) were much less happy. They had come for something ‘new’ and had mostly got what sounded like eighty-year-old material. To such elderly texts as Wilde and ex-trendy Genet.

Oh well, we came. We saw it. I suspect we may be three of the few who will ever be able to say that.

But oh! In the end ... my heart goes out to Miss Bradic and her companions who spent so much time and energy learning that Querelle piece …

Posted by GEROLSTEIN at 6:45 AM