Radialsystem Go! A night of magical musical-chairs with the Mahler Chamber Orchestra

An absolute priority when I arrive in Berlin each year is a date with my musical mentor, Paul (otherwise the one and only ‘Montmorensy’). Out come the concert schedules, and we get down to planning my education and entertainment for the season. The Konzerthaus, the Philharmonie …
This year, to my distress, we couldn’t find a starter. I’m funny: as with operas, or musicals, or plays, I don’t really care to go to a piece I’ve seen before (no matter who the artists), I want to hear something that’s new to me. And the main houses seemed to be hosting an awful lot of ‘Bach, Beethoven and Brahms’. Or Berio. I prefer Boieldieu.
So we decided to look outside the square, and we found an orchestra – the Mahler Chamber Orchestra – playing what looked like a fun programme at Radialsystem V, a converted warehouse space. On-line booking … done! And, while the rest of the country was occupying itself watching Germany vs Portugal (football, you know) we set off for Friedrichshain.
I little suspected what was in store for me.
What was? Why, probably the most gloriously entertaining – no, just say plain ‘best’ – night I have ever spent at an instrumental (no singing!) concert in my life.

Firstly, the concept. Someone had had the marvellous idea of utilising the whole spaces of the building for the entertainment. The main hall (600 seats), two smaller upstairs venues, and the terrace overlooking the River Spree. We started, after a Dukas fanfare on the riverside, with the whole orchestra playing Schostakovich in the Hall, whilst upstairs hosted a Malcolm Arnold brass quintet. Then the band split up, and while some of the strings played quartets elsewhere, we had a bevy of fascinating pieces in the main auditorium… 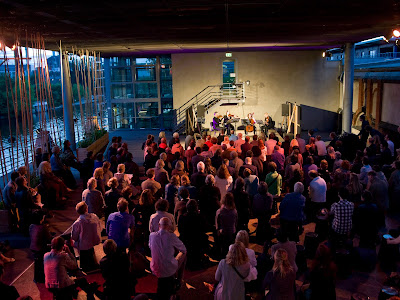 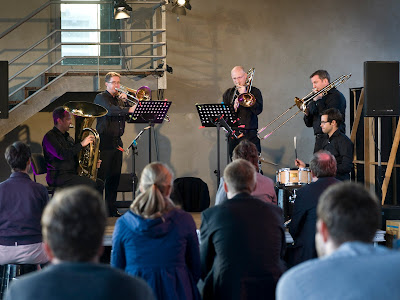 But let’s be chronological. With the me-detail that all the pieces except a dash of Mozart were – as hoped -- new to me.
We opened with Schostakovich’s cello concerto No.1, with the young American Alisa Wellerstein as soloist. What a stunner! I whispered to Paul: they OPEN with this? I won’t be able to listen to the classic concerti for ages. This vibrant, exciting piece of music swept me off my feet, from its aggressively hacking, chopping early phrases to the wonderful extended solo cadenza that opens the 3rd movement. And it was played stunningly. I thought I had seen the ultimate in physical cello playing when I saw Guy Johnson’s Gorecki in Jersey last month. But this was something else. Miss Wellerstein must have her bow re-haired every time she plays it. The overflowing audience went wild, and eventually she had to pacify us with a bit o’ Bach before we would let her go. 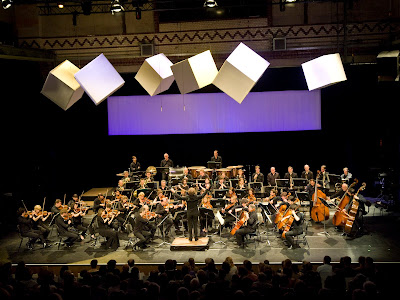 Next up was the Mozart. He seemed a bit out of his fach among all the S composers. Why? I thought. I was to find out. The trio divertissement introduced the Sasha Waltz dance troupe doing a pretty routine to the pretty music. You always end up with your eye on one performer: I liked the tall elegant lady in the hideous black Mother Hubbard. And caught myself thinking ‘modern dance has whole lot of classic poses in it. Where would they be without the arabesque?’
The troupe followed up with a ‘structured improvisation’ to music by Schnittke. My brother insisted just last month that I get to know Schnittke. The piece was entitled ‘Moz-art à la Haydn’. And now we saw why it had been preceded by the ‘normal’ Mozart. This was a (seemingly) anarchic ‘joke’, full of musical jokes and choreographic jokes, and wonderfully funny and entertaining it was too, in all its parts.
Ignoring the rule about ‘children and animals’ the troupe of 7 strongly featured a talented little boy who quickly became the audience pet, but for me the star of this essentially ensemble piece was the conductor, Pablo Heras-Casado. He started the piece front-centre … well, the orchestra was in the aisles! ... and the action swirled around him, until, in the twist that absolutely made the item, he became involved in the dance ... followed by his whole agile band. What movements the choreographer had given the thankfully young players to do, while playing the closing part of their music! It was superb. It was a whole performance entity, full of joyous fun and surprises. And I loved, loved, loved it. ‘But Kurt’ I can hear a little voice from my past saying, ‘you don’t like modern dance’. Yeah? Well, I do now! A heap! 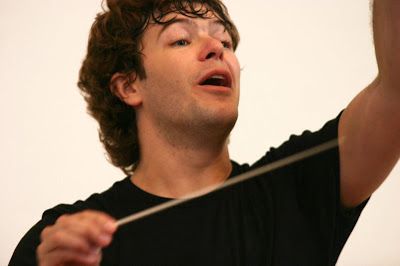 The packed house dispersed to the friendly bar, the riverside terrace, and the other rooms (Miss Wellerstein was playing again on the 3rd floor), but we decided to stay in the Hall a bit longer in spite of a 15 minute interval. Interval? Oh no. You see, this being football night, some imaginative person had got up a game. We each had a ‘football card’ with stickers of the orchestral players to collect. Well! To see teenage girls and elderly gentlemen eagerly swapping a timpanist for a flute … we, of course, joined in enthusiastically and I am happy to say we got our missing British trombonist before the end of the evening, and received our prize: a CD of the orchestra playing … Brahms!

Things got under way with three little pieces for solo clarinet, before we hit the next feature of the evening: a brass and wind octet by Stravinsky. More fun! Especially the first half. The music gets a bit wandery and unfocused later on, but watching and listening to the players (favourite: Chiara Tonelli on flute) tossing off their bits of fioratura, was a delightful contrast to the two big hits of the earlier programme.

We retired for a welcome drink on the terrace and looked at our upcoming options. John Adams upstairs and … oh! goodness a whole Schostakovich symphony down. And we’d been here three hours already. Well, Mr Adams was full, so we decided to call it a day. ‘Oh but its not finished’ said the orchestra’s official as we left. I told her we were going straight home to book for the next Radialsystem show. But, alas, it wont be the MCO. They’re off to delight other corners of the world …

After having wonderfully delighted me (the Victorian scholar!) and Paul (the professional musician) and I’ll bet every one of those 600 plus punters who crammed the house.

PS Next visit to Friedrichshain 23rd June to hear the Rossini ‘Petite Messe Solennelle’ in which I made the greatest success of my singing career … in 1968. From the pictures, it will be rather different! Hurrah!

PPS I’ve got a duplicate oboeist if anyone wants to swap. I’d like a spare of that conductor, please.

PPPS I wonder what that little boy will grow up as.