A light and bright lunch in the Nürnbergstrasse

I ate so much while I was in Jersey. And so well. Barely a glitch. And I was intending to pull my belt in during my months ‘at home’ in Berlin. More home-compiled meals, less restaurants. Well, why not? My flat has a nice wee kitchen, Kaiser’s first-class supermarket is 100 metres away, on the Nollendorfplatz, the Saturday and Wednesday market at the Winterfeldplatz, full of enticing cheese, charcuterie and other goodies is 100 metres in the other direction. My ‘picnics’ at no 32 (with or without alcohol, depending on the hour!) are thus quite famous.

And then, of course, there was the fact that, last time round, I didn’t find an equivalent of Jersey’s Dockyard here. In fact, I only found one local restaurant that I liked, for a light lunch or an early supper. That, of course, was Sissi’s on the Motzstrasse, and Kevin and I repaired there on Day One of this season. I had a tasty broth with Leberknodel, followed – silly me! – by Sud-Tirolischer knödeln with spinach and cheese. They were delicious, but oh! in spite of not having eaten for 36 hours, by the time I’d finished I was noodled out and could only go home to snooze! NOT the menu for a Gänzl light lunch! So I resigned myself, not unwillingly, to picnicking chez-moi for the future.

Perhaps, I thought, the cuisine here isn’t my scene. And anyway, amazingly, Sissi – like many restaurants here – doesn’t take credit cards! And if I take cash from an ATM, I get charged some horrendous percentage… so, home cooking! 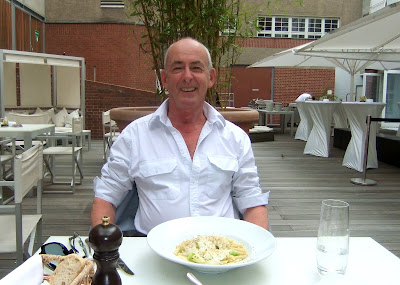 And then my friend Horst called, and said ‘let’s do lunch’. So we did. I met him outside the attractive state-of-the-art-deco Ellington Hotel and we adjourned to the open courtyard behind the very striking main dining room … the city towering up above us, the sun pouring down … nice! And very umm expensive looking.

Surprise! They have a set menu luncheon at 15 euros. Choice of soup or veggie salad antipasto, followed by schnapper or tafelspitz or pasta, plus a bottle of sparkling water and a coffee … 15 euros! And, surprise again, it was jolly good and it was liiiiiiiight.
I had a lovely rigatoni – not drowned in any sauce ... infiltrated by slices of fresh asparagus (it’s the Spargel season!) .. and Horst went for a good, straightforward tafelspitz … They were all that you would wish for. And the little veggie antipasto, in spite of being well-rocketed was a well-judged starter. 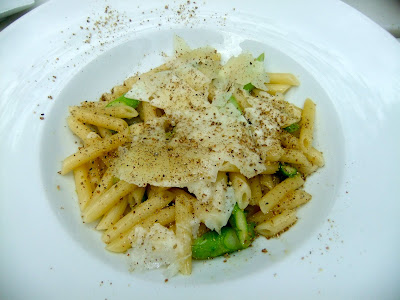 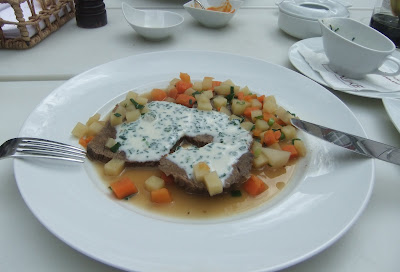 So we sunned, and we chatted, and it was all most agreeable. I’d recommend the Ellington’s set lunch to anyone. Especially if they have the good company of a Horst! 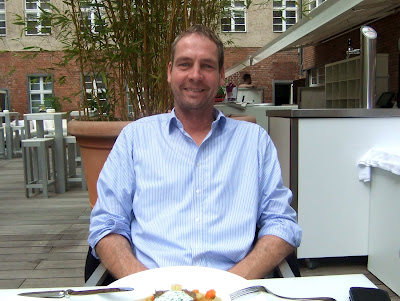 Posted by GEROLSTEIN at 1:28 AM