Navigating in the wrong direction ... or an evening with Little Red Riding Hood

.
Tonight, we went back to Radialsystem V. I know, never try to repeat a good trick. But it’s a great fun venue, and I reasoned that even if this week’s concert was only half as good as the Mahler Chamber Orchestra/Sacha Waltz evening, it would still be a splendid night out.
And that’s what it was. Exactly half as good. I will explain.

The evening was advertised as Rossini’s Petite Messe Solennelle. Lovely! I know the piece well from having sung the solo bass part at Strawberry Hill in 1968 or 9, and I hadn’t heard it since. Performed by Nico and the Navigators. Curious name, what could it mean? They were going to sing the music properly, weren’t they?

I needn’t have worried on that score. The evening was a musical joy. That was the half that was good. A little group of fresh young voices, and four splendid soloists .. how enjoyable to hear Rossini’s beautiful music sung this way, instead of by a ponderous and glutinous choir and pretentious vocalists. The mezzo-soprano (Ulrike Mayer) with her ‘Agnus Dei’ and of course ‘my’ basso ‘Quoniam’ (Pauls Putnins), plus all the ensemble bits, plus … well, I just enjoyed all of the music. And the way in which it was played and sung. 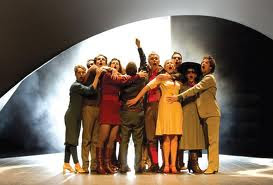 What I did not enjoy was the physical production. The staging, for want of a better word. The cast, dressed like leftovers from a 1970s production of Godspell, were directed in the same old-fashioned way as that piece. Lots of non-stop fidgeting and twitching, meaningless posing and tricks, chunks of foolish indistinct mono- and dialogue (much in English) with no relation that I could fathom to either the music or the liturgical text, and several ‘characters’ that by halftime (except there was no interval .. 2 hours!) I could cheerfully have strangled. An incidental little red-riding-hood lady who did 1970s choreography relentlessly against the music would be my first to the gallows, followed closely by the lady in the picture hat (why?) and the man in green who took his shirt off (why?). But I suppose they were only doing what they had been directed to. ‘Nico’ has to take the blame for the ‘konzept und regie’. The half that was not good. 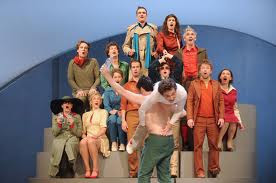 I could go on at length, but it would just be to say more of the same. Grand music, beautifully sung, in a meaningless, gimmicky, fussy staging. Why?
Well, Paul came up with the only possible answer. How otherwise to get 21st century folk to come and hear a Rossini Mass? I am obviously in a minority, but hey! I found a way round it. When it got too much … I just shut my eyes and listened. Great!

They’re doing Bach next week. I’d pencilled it in. But much as I’d like to hear these talented young singers again, I couldn’t stand another dose of Red-Riding-Hood and Benedict, so I’ll be skipping it. And now, I have to put my Mozart hat on. Don Giovanni tonight … lets hope there’s no Godspell there!
Posted by GEROLSTEIN at 1:56 AM