.
Just in case anyone thinks I'm sitting up here on my Wightish moors, eating, drinking, strolling, visiting posh restos and merry vernissages with my friend Debby (who was just Debby last year, but now is Debby-the-mayor-of-Ventnor!) ...
Well, yes. I'm doing all of that. But I've also written a scholarly and violently detailed 33 pages on Henry Phillips, Victorian Vocalist, and today turned out a review (not a swift exercise! 6 hours to listen twice to two CDs, and then write) on a very interesting new opera recording. This will be published, again, in Dutch, so I post the English version here for those to whom it may be of use or interest:

In recent decades, record producers have spread their hands widely, turning out recordings of many operatic works unfamiliar to today’s stage. But one area of operatic music has been largely ignored: that of the enormously successful English language operas of the 19th century. Those of us who are interested in this rich period of musical theatre have been forced to rely largely –when they can be found -- on bootleg, amateur or radio selections of such once standard pieces as The Mountain Sylph, The Bohemian Girl, Maritana, The Rose of Castille, Satanella, The Lily of Killarney, Robin Hood and Lurline. But now, at last, that seems set to change.
Two years ago, Raymond Walker’s Victorian opera brought out a recording of Balfe’s The Maid of Artois – far from being a core work of the Victorian repertoire – and the interest which it evoked has resulted in a second like recording, this time of one of the more widely popular English operas of the second half of the 19th century: Vincent Wallace’s Lurline. 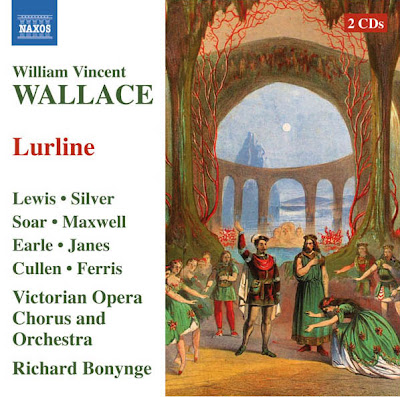 It is said that Wallace wrote this work many years before its production in 1860 by the Pyne and Harrison Opera, at that stage Britain’s most important and lavish English opera company, and that he was influenced in its writing by such successful German supernatural operas of the era as Der Freischütz and Der Vampyr. But he had no need to go to Germany for his subject: the operatic Lurline, or the Revolt of the Naiades (music: H Louel et al) had been a hit at the Adelphi Theatre in 1834, many balletic versions of the tale of the Nymph of the Rhine had since been seen on British stages, and Christmas 1859 saw the Adelphi repeat with the burlesque The Nymph of the Lurleyburg.
Musically, too, Wallace’s tones remained ineffably English – in listening to the score of Lurline one catches regularly the styles which Arthur Sullivan would later gently parody. However, although – in spite of contemporary critics’ calls for the abolition of ‘Italian’ recitatives in English operas – Wallace here chose to go that way. The result was a piece with some expository musical longueurs. The solos and ensembles of Lurline, however, included some very pleasing pieces – from the soprano ’Flow on, oh, silver Rhine’ with its obligatory (for the period) coloratura, to the jaunty contralto ‘Troubadour Enchanting’ and the ‘Henry Phillips style’ bass ballad ‘A father’s love’ and some richly written finales. None of the songs would become ‘take-away’ standards in the manner of the top numbers from Pyne and Harrison’s most recent successes: Satanella’s ‘The Power of Love’, or The Rose of Castille’s ‘The Convent Cell’ and ‘I’m not the Queen’, but in the show they were undoubtedly effective.
The new opera, with its familiar tale, its spectacular and picturesque staging, and a top cast, headed by Louisa Pyne, William Harrison and Charles Santley, the best operatic soprano, tenor and baritone of the time and place -- turned out a decided success and, following its initial seasons at Covent Garden, it was played four more seasons by the company, before going on to become for decades (in a sometimes heavily slimmed down version, with virtually all of the recitative banished) a regular item in the repertoires of touring opera companies in Britain and the colonies. In the process, it made itself a deserved place amongst that double-handful of standard British operas of the 19th century. 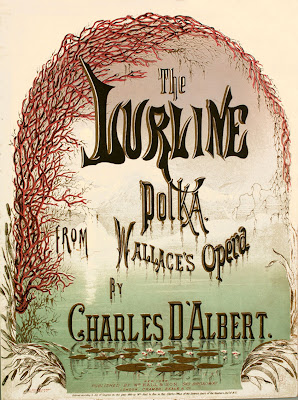 Lurline, seemingly in its complete original form, has been put together and recorded at a very noticeably higher level than was The Maid of Artois. Orchestral and choral forces, under the baton of Richard Bonynge (also concerned in the preparation of the score), do an impeccable job with Wallace’s occasionally rather square choral and orchestral lines, and burst and surge forth splendidly when the composer does, in his finales, ensembles and interludes. The two principal soloists both give a magnificent ‘Pyne and Harrison’ performance. Sally Silver sings Lurline with beautiful tone and limpid clarity, invests her melancholy and unshowy Grand scena with warmth and feeling, makes a gem of the showpiece ‘Flow on, oh, silver Rhine’, powers out the ‘Night winds’ as if it were ‘Tacea la notte’, and tosses off the coloratura bits of the show’s finale with unperturbed abandon. The sweet and pure tenor of Keith Lewis shines through in Rudolf’s 1st-act barcarolle and his pair of sentimental ballads, but really catches fire when Wallace pairs him with Lurline and lets him soar with masculine passion instead of play with pretty pensiveness.
Fiona James make a nicely purple-coloured if not very contralto ‘other woman’ as Ghiva, David Soar an efficient though sometimes not-very-baritone Rhineberg, singing his opening aria with great vigour but stretched latterly at the top, and the two not-very-buffos (Donald Maxwell and Roderick Earle) fill their roles capably. In each case it might have been preferable to follow the original contralto-baritone-buffo-strong buffo manner of vocal casting.
But this is a minor quibble. Naxos and Victorian Opera’s recording is as welcome as flowers that bloom in the spring. It is welcome as an historical document, letting us, in the 21st century, hear in its fullness and thoroughly professionally performed, a work – one of a group of works – which should never have been allowed to sink in obscurity. It is also welcome as a very agreeable ‘listen’.
Lurline has its faults .. that it was curtailed for popular consumption is not surprising, and 21st century listeners may have an unfortunate giggle at musical lines such as ‘Rupert alive? we thought you’d drowned’ and some of the chorus cadences (boom-BOOM) ... but immerse yourself in, for example, this opera’s second act finale and, if you didn’t know before, you will understand why Lurline was one of the favourite operas of its age.
Roll on Victorian Opera’s forthcoming Robin Hood (Macfarren) and all that shall follow.
Posted by GEROLSTEIN at 5:27 AM

lovely kurt and so witty - geerd