Berlin goes on without me ...

.
Oh, why can’t a man be three places at once? Why can’t I be in New Zealand when Seppl and Fritzl are doing splendid things, and at the same time be here, drowning in sunshine on my downs in the Isle of Wight, and at the same time again be back in Berlin… where other things are going on without me …
Well, in one month’s time I will be back in Berlin. I’m not going back to the southern hemisphere while the Nollendorfstrasse 32 is calling me so invitingly…

One thing I’m going to miss, however, by not being in town in July, is the opening of an exhibition organised by my Berliner buddy, Dr Kevin Clarke, at the city’s Schwule-Museum: an exhibition entitled ‘Glitter and be Gay’ and devoted to the life and work of the German director and choreographer Erik Charell.
Charell, famous largely as the original stager of what the English world knows as the musical White Horse Inn and as the director of the famous film, Der Kongress tanzt, was a specialist of the spectacular stage – large revue and Operette productions with large scenery, large casts, large stars, heaps of colour, glitter and choreographic movement – the 20th century equivalent of the 19th century French and German ‘grand opéra-bouffe féerie’ productions.
Material from his shows should, of course, make for a splendidly pictorial exhibition, and I shall be fascinated to see what Kevin has managed to gather from around Europe.
There is, however, another angle to the exhibition. The title, 'Glitter and be Gay', is not only apposite in its ‘glitter’ connotations, but also in its ‘gay’ ones. For, scarcely surprisingly, Charell was gay. And ‘Schwule-Museum’, for those of us who speak not German very much, means Gay Museum. So the personal side of Charell’s life is also documented in the exhibition. As one can see from the poster… I wonder, are those chorus dancers from Im weissen Rössl… 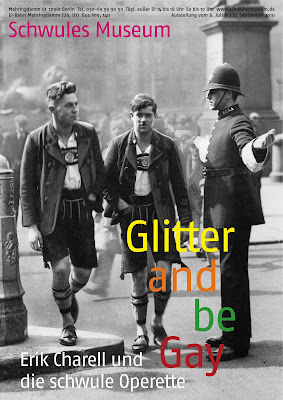 A couple of years ago, I contributed a chapter to Kevin’s book, also entitled Glitter and be Gay, dealing in ground-breaking (and since imitated) fashion with the subject of homosexuality and Operette. So I feel personally involved in this project. Happily the Exhibition is going to be still showing when I arrive in town … but, alas, I shall miss the undoubtedly glittering and gay Opening, for which others are flying in from as far afield as New York ..
Ah, well, I’ll just have to glitter twice as hard when I do arrive…
Posted by GEROLSTEIN at 10:58 AM