Learn me a lobster?

.
This is the way it was meant to be. This is why I come to the top half of the world in the northern summer. For super-sunshine in such places as the Isle of Wight. I know I should feel for those dear to me, left behind in New Zealand, where it is now throwing a wet, cold and even snowy winter tantrum, but my imagination doesn’t stretch quite that far when the sun’s on my back, the sky is blue, and Red Fred is waiting at the gate to take me jaunting…
Time enough to feel for Gerolstein when I get home and see how many thousands of dollars worth of damage the weather has caused (thought: I wonder if that’s covered by insurance .. you know, act of God. Jupiter Pluvius in this case).

Sunshine inevitably gets me out of the house, off my ‘mountain’ and out in search of jolly lunches. A script from my new little cache of Extremely Interesting New Musicals (I know, I haven’t told you about that little ‘discovery’, but I will in due course), under my arm, I have over the last four days revved up and out in search of a table in the sun where I might leisurely lunch…

Pause. I have just written an article on this subject. I’m doing a month’s worth of Me Pieces for VentnorBlog, the area’s premier ‘paper’, and one of them complains about the fact that almost all the once-old, now souped up (beams and horse brasses, whitewash and flower-boxes) pubs of this island cater only to the ‘family’ trade. Over-piled plates of things with lettuce (ycch!) and chips and other stodgy food .. sandwiches an inch and a half thick .. and, Lord forbid, decorated with potato crisps…
So where am I supposed to lunch?
But I don’t give up, and sometimes I score a hit. 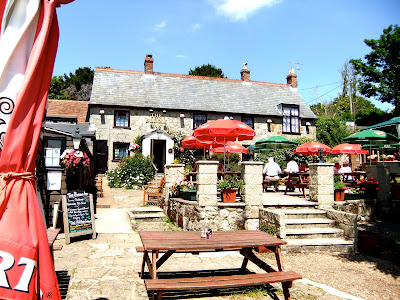 The Buddle Inn, down the hill here at Niton, is a very attractive example of the Wightish megapub. It has a nice feeling of realness about it, in spite of the beams and brasses, and it has a splendid terrace where one can sit with one’s script or Macbook and indulge in one’s ginger-beer shandy in relative quiet. And their crab sandwich was much less of a doorstep than usual. Buddle is nice. Will return.

Everyone is doing their very best to help me find suitable places. They know how keen I am on nice lunching. So when I was told that the Boathouse at Seaview was under the same management as my preferred New Inn, Shalfleet, I decided – especially since I had so far missed Seaview -- to give it a go. Well, Seaview and its uncomfortable (for Fred) streets, and view of the mainland, I can take or leave. And the Boathouse (what a silly name for something that evidently isn’t) is not the New Inn. So I did crab sandwich (not Buddleworthy) and shandy (not Fentiman’s) and sat in the sun (nice) by the theoretical sea (view obscured by a stone wall) and read my script (excellent), and thought I’d come quite a way for very little. Won’t return. 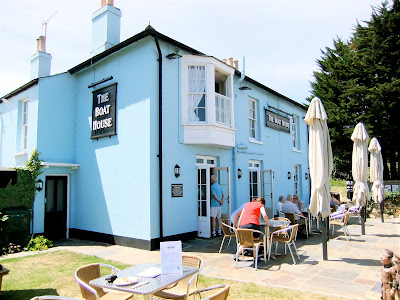 Yesterday I didn’t lunch. I went searching. Down to Steephill Cove where there is a restaurant named (believe it!) the Boathouse, which, I had been told, you had to book hours or weeks in advance to get into. This is, of course, no guarantee of quality, but I like Steephill and thought I would look.
I looked, and I liked the look …. 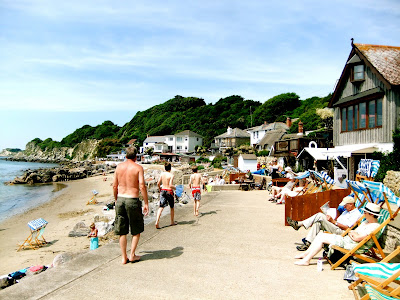 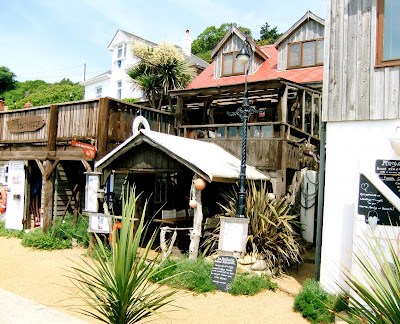 but the place was closed. Wednesday is ‘pause’. But the pretty lass in the next-door ice-cream shop (recommended) mobile-phoned the owner and half an hour later he turned up. Since he was even prettier than she, since I had enjoyed my time in the sun (with cider sorbet), and since he was able to fit me in for today, I forgave him. In fact, I thought I might get him, on the morrow, to teach me how to eat the lobster which is the chief item on their menu. Because, confession time!, I have never, in all my years, dared order lobster – not even in all those cruises through the Pacific – because I don’t (didn’t) know how to get into the shell!

So, today, I went down to Steephill Cove for lunch. Me, Red Fred, and my musical-comedy script…
Yes.
The Boathouse is a ‘yes’.
Their fresh sea-food is a big, big ‘yes’. Their venue, metres from the waters of the bay, and wonderfully unpretentious, is a vast ‘yes’. The young ladies who serve you (dammit, the boss wasn’t there) were deliciously not quite professional and a definite ‘yes’. And they gave me my lobster lesson. Because I ordered lobster, and I ordered crab, and I ordered prawns and they were all wholly, enthusiastically ‘yes’.
Any ‘no’? Yes. They are so unpretentious at the Boathouse that my wonderful seafood came on a huge bed of (argggh!) common shredded lettuce, accompanied by common shredded carrot and what looked severely like very common ex-frozen corn. I ignored all that .. left it on the plate .. and just ate the delicacies. Wonderful! 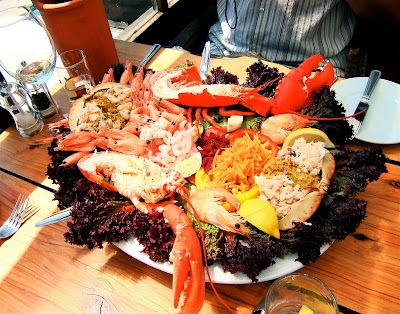 My lunch gained an extra bit of pleasure from the fact that the two tables next me were occupied by the most delightful mainlanders .. ‘we’ve been waiting to come here (the restaurant) for a year’ .. to whom, after my second bottle of local Goddard’s Ale, I believe I recounted half my life history. Well, when you meet nice people, that’s what you do. I do.
I have had – lettuce or not –a grand day. And I’m booked in again for next week, when I’m going to have company of my own. My dearly beloved brother John is coming down from Leicestershire for a few days .. so the Boathouse .. the REAL one .. is a must! And we shall have champagne instead of Ale and .. chuckle .. HE can drive home!
Ah. What a nice, nice day…
Posted by GEROLSTEIN at 1:24 PM