.
I had to force myself not to wander off to more likely-looking lands. I was determined to stick to the Letter P until the last of them had been plucked from the pod, or consigned to the Millie Vere basket. Oh, Lord, four more Americans ... they are so much harder to exhume, the country being larger, dis-united, and the recording systems of many states not up to scratch. And as for the veracity of the newspapers ... Well, pinch your nostrils and .. diiiiiive ....
Harry PEPPER first, because he is, to me, a little memorable. He was America's first lead tenor, role of Eugene Marcel, in possibly the largest American musical-theatre hit of the later 19th Century, Erminie. Pepper? Surely his real name. First stage sighting, 1881, so probably born a touch before 1860?  ...  oh! married Carrie Tutein (real name!) ... that should be easy to find. How to waste half a day. Both 'clues' were false. Harry was much older that that when he went on the stage, and, though he and Carrie undoubtedly were a couple for a while, he married two other ladies, and she a different actor ...
So. Start again. Harry was born in England. Where? When? Well, he fairly consistently gives his birthdate as (July) 1849. Born in England of an Irish father (most likely in the military) and an English mother. But he was even more consistent about his date of arrical in America. 1886 ... which makes him surely this fellow arriving in steerage on the Cella from England at New York 8 June 1866.

Aged 19. And a .... fishmonger? But where? Well, he didn't stop in New York. For reasons unexplained he headed for Iowa, and established himself in Mitchell as a farmer. We can see him there, alone on his farm, at Douglas, in the 1870 census, Aged 24.
Harry's life must have seemed nice and settled. He married the girl (literally) next-door, Ambrosena Murphy (25 June 1870), fathered a son, Freddie (1872), took over a Northwood hostelry, which he renamed 'The Pepper House' in 1874 ... and, then, things went wrong. The pub was burned down in 1876, and in 1878, after giving birth to a second son, Clifford (1877), his young wife died.
In 1880, filling in the Des Moines census return he was 30, born England, and no longer 'farmer' but 'musician'. Fishmonger, farmer, publican ... at last he had found his niche. So leaving the wee boys with their widowed grandmother, he set off ...
I first spot him in early 1881, a member of Alice Oates's touring comic opera company, and then at the Fifth Avenue, succeeding Wallace McCreery in the role of Gaston Dufaur in Donna Juanita. He played the Duke of Dunstable in Boston's first Patience (a mediocre affair), but he came out of it well, and was whisked off to play his role to the Patiences of Fanny Wentworth and of Lillian Russell, before being promoted to play Grosvenor with a touring group named the Star Opera Company. He was recalled to Boston to created the tenor part of Arthur Dobbins aka Lord Arthur Peerage in a naive piece called Pounce & Co ('plays an insipid lord with good effect, and sings well') and when the theatre switched back to Patience took up his old role, alongside Ida Mülle, then Sadie Martinot, in between the two runlets appearing as Pippo the the La Mascotte of Rose Stella.
In 1883, he took a trip to England, and on his return to America, sang at a number of concerts and took the role of Orpheus (or, occasionally, Styx) in a Orpheus and Eurydice said to be related to Offenbach. If it started out that way, it soon took a New York turn, with all sorts of stuff being ladled into the score. The 'chunky' Pepper sang an English ballad of his own composition 'Awaking' 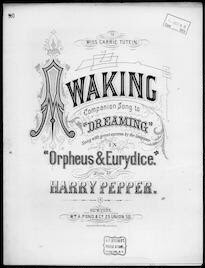 'Awaking' was dedicated to Danish-descended soubrette Carrie Tutein who was, and had been, apparently, for a while the de facto Mrs Pepper. I'm not sure why they didn't marry, they were both free ... but ... 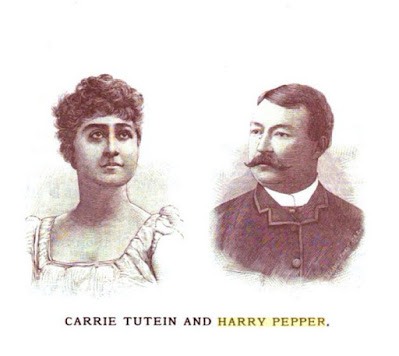 Harry joined up with a company yclept 'Barnett's Ideals' (Olivette, Giroflé-Giroflà &c), which folded, mutated into a 'Bijou Opera Company', then briefly into his own company, playing La Mascotte et al. He played more Patience, this time opposite Marie Jansen, and he delivered ballads at Kellar's Comedy Theatre on Broadway and 29th. His ballads went down a treat.
Then life played one of its tricks. In February, Carrie was brought to bed of a babe. And on 10 May, Harry got the job of his career... at the Casino Theatre, New York's comic opera capital, in the tenor lead of the British musical Erminie. The 'English tenor' scored a hit, within the hit, with the lovely ballad 'Dark is the hour' ... he was flying high! And then, 4 August, baby died. Harry left the Casino and hurried home, while Henry Hallam took over as Eugene Marcel ..
He would never reach those comic opera heights again. When he returned a month or so later, it was singing his ballads with minstrel shows and in variety programmes, until he and Carrie 'the lyric sunbeam' went out on tour in a Frank Tannehill farce comedy variously titled Nan's Acre Lot or Struck Gas. Music by H Pepper. They mounted various companies playing Ruddigore ('with new introduced numbers') The Mikado, The Bohemian Girl etc, appeared in variety ('with 10 English trained seals' with 'Herr Tholen and his singing dogs'), and returned again to Struck Gas with Harry as a removable speciality. Struck Gas served Carrie's soubretteries better than Harry's ballads, and he went off to sing with Dockstader's Minstrels, acclaimed as 'the best ballad singer in Gotham'.
And, from now on, that was largely -- with his position at St Mark's Church -- what he worked as. Performing, teaching, composing ... and, indeed, publishing .. 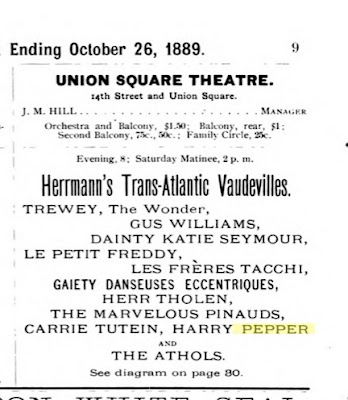 'Particular mention should be made of Mr Harry Pepper's artostic renditon of the old-time favourite ballad 'Will o'the wisp' and of the more modern Sullivan's 'The Lost Chord', the latter with organ accompaniment'. (1892, with another old Sullivan singer, Walter Pelham) 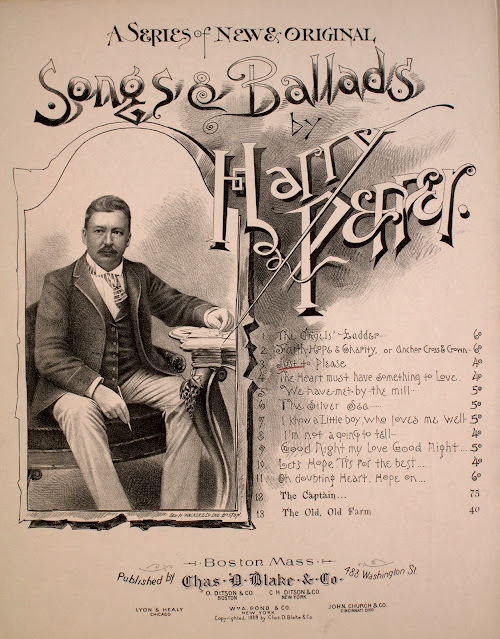 Harry was liked, admired .. 'Mr Pepper sang six ballads in beautiful style; his phrasing and delicacy of tone in some of them were simply delightful. Surely Mr Pepper is entitled to a good deal of praise for his persistent efforts to revive the ballad, for what is more delightful than a charming ballad well sung? Nothing.'
Harry Pepper died at his home in Bridgeport, Connecticut 8 April 1911. Probably aged 62. Sweet 'Peep-Bo' Carrie (b Chelsea 5 October 1865) was already dead. Yes, she was remembered not for her starring role in farce-comedy, but for her youthful 'third little maid'. Post-Harry she had married actor James A Marlow, and died of 'heart disease' 2 April 1900 at Lowell, Mass. Aged 34. Emma lived until 1936, Freddie from Iowa till 1950 ...
There is a vast amount to be collated about Harry's career. I have summarised and telescoped ... but I still lack that final bit of information: Harry, whose baby were you? Of the handful of Harry Peppers and Henry Peppers born in England between 1845 and 1850 ...
I spent an inconsciable time on Harry, Carrie and families. So, in the end, I only got around the one other of my American Ps.
Irene PERRY [BRYANT, Irene] (b New York 1863; d 781 Greenwich Street, New York 29 May 1941) was one of the two stageworthy daughters of one Benjamin Franklin Brady (1834-1888) and his wife née Isabelle S de Chalabre (1830-1886).
'Ex-Commodore Benjamin F. Brady, formerly one of the most prominent supporters of amateur boating in America, died at his home in New York City, March 30, aged 54 years. Mr. Brady was born in New York, Oct. 27, 1834. For many years he was commodore of the Harlem River Boat Clubs, and did effective work in promoting the best interests of amateur boating, During the palmy days of the volunteer fire department of New York he was a prominent member of that organization. He was one of the most expert penmen of his day, and specimens of his artistic work adorn the walls of various public buildings, and many more are in the possession of private families'.
That quote comes from Findagrave, which adorns his entry with the graves of his wife, and of elder daughter, Ella (Mrs Candee), who had been known on the stage as 'Helen Sedgewick'. They wouldn't have shared a monument, I feel. Father and mother had been divorced when Irene was ten, and the three ladies all went on the stage. 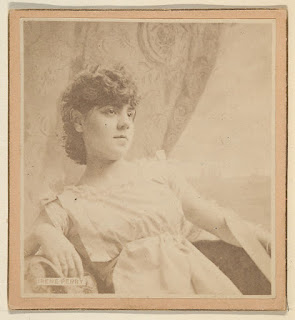 Irene shows up on the stage at age 16, in HMS Pinafore. As ... Sir Joseph Porter, in a juvenile company (Wood's Theatre 20 October). She quickly moved on to E E Rice's Boston management, as a chorister, but was eagled out of the ranks by Mr Rice and promoted to roles such as Arabella in Billee Taylor (with Brocolini as Barnacle), Carlo then Merope in Cinderella at School, and Lady Saphir in Patience, making early New York appearances at Booth's Theatre with Rice's company (1881-2).
She toured with Willie Edouin in Aladdin (Too-Too) and Gill's Babes in the Woods (Prince Prettyfellow), the played Kate in Pop! and more PAtience for Rice in summer season at the Boston Museum, and toured with Rice's Surprise Party in its most flourishing days. She palliated a 'sweet, accurate but not powerful' singing voice, by her abilities as a reciter and her charming looks, and progressed to play O'Shacabac in Bluebeard and then to the McCaull companies. She appeared at the Casino Theatre as Marjorie in Nell Gwynne, Constance in The Sorcerer, Lady Angela in Patience, Orlofsky in Die Fledermaus ... 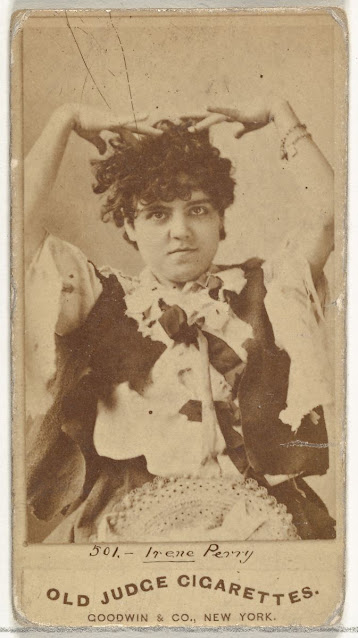 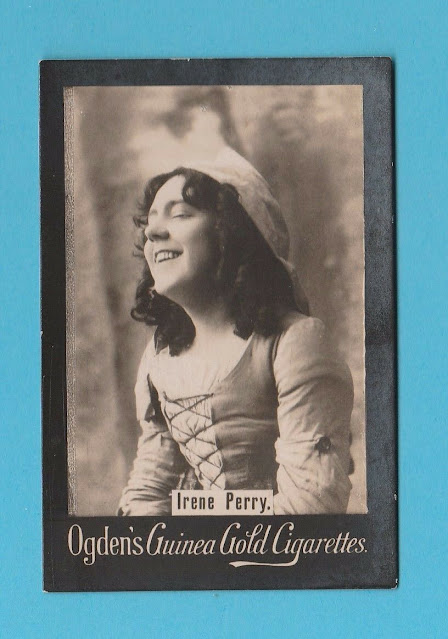 And then she married. She married theoretically richly and well. Her husband was Alfred Weber jr, the son of the millionaire piano manufacturer, the challenger of Steinway. You can read about sr and jr on the web (https://en.wikipedia.org/wiki/Weber_Piano_Company).  Junior seems to have been a worthless lad-about-town. I won't go into his exploits which are quite yawnful and pathetic ...  Irene divorced him, with no issue, and in 1895 went back on the stage. She played in Excelsior Jr for Rice, with Jefferson de Angelis as soubrette in The Caliph (1896), in The Lady of Ostend, at Daly's Theatre, took the grand role of La Favorita in America's The Circus Girl, was Toinon in Madame Sans Gêne with Ada Rehan, played in Whirl-I-Gig at Weber and Fields (Barbara Fidgety, Sapolio), in The Rounders, and in the iffy musical The Defenders ... 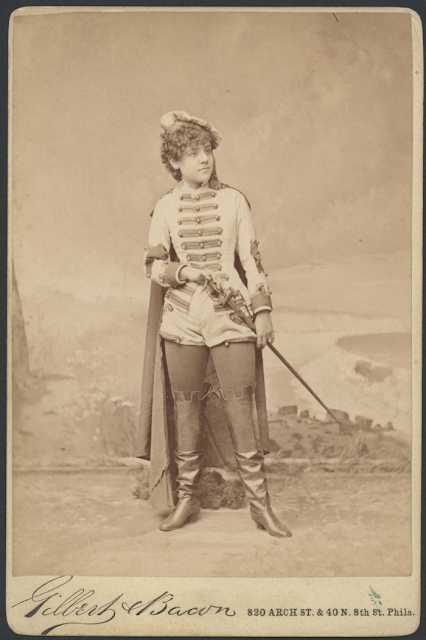 and got married again. This husband was a newspaper advertising man, but the son of a bishop, and he promptly died .. 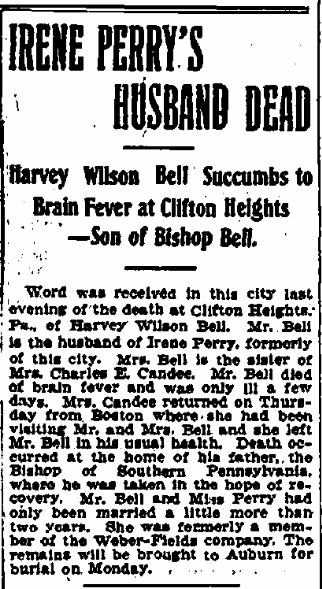 You notice, 'Irene Perry's husband' makes the headline, not 'Bishop Bell's son'. By the way, what precisely is 'brain fever'?
I haven't followed Irene up therefter. Just to say that she lived to 1941 ... a long way on from those years as Sir Joseph Porter..
That's enough.
I shall go to bed and Puzzle as to whether Mr S[ydney?] Price of the Savoy is the same Sydney who later supported Richard Mansfield, played in America, etc etc.
For now .. au revoir ....
Posted by GEROLSTEIN at 3:08 AM