Lost Cartesians: One soprano, and one Scottish sprinter ...

.
The yield of my daily dig for the tales on C19th Cartesians is -- like an Australian goldmine --becoming less and less large, but -- as in those mines -- dig deep, and you do hit a nugget ...

I have only two to offer, again, today. But they are two which I muchly enjoyed investigating ...

Alice [Maud] OPPITZ (b 56 Shelgate Rd, Battersea 9 November 1878) has been a curiosity to me for forty years. That name? German? Jewish? Well, finally, I did something about investigating it, and ...

Alice belonged to a fascinating family, originating in the town of Hajda in Liberec, Bohemia (today Nov Bor), which specialised, traditionally, in the making of glass. The Oppitz family, the male members of which were seemingly wholly immersed in glassmaking, emigrated, in the 1840s, to England, and there plied their trade with notable success. Paul Oppitz (1827-1894) was the most notable, but his brothers, then the next generation, also followed the same calling. There is a fine family tree of the Oppitzes on the web ... fine as far as it goes! It doesn't go as far as Alice.

Alice was the granddaughter of Paul Oppitz's elder brother, Ferdinand; third daughter of his glass-making son, Emile Paul Oppitz (1848-1906) and his wife Rebekah née Mallison. She was born just late enough to miss the family scandal: 17 year-old auntie Rosalie Josephine Cherry Oppitz got herself seduced, with child, and led into crime (1875) by a fellow named Raymond Sullivan. Ferdinand took her and baby Raymond (b 11 December 1874) home, but she ran away. The pair ended up in court charged with robbery, but Rosalie was rescued once more, and promptly married off to Mr Wyer, to whom she apparently stuck till her death in 1911.

Other members of the family were more respectable. One became a 'well-known parliamentary journalist', another changed his name to 'Arthur Evelyn du Cane' which was the name of the vicar of Abbotsford, Devon, while three went on the stage. Ferdinand Cecil (b 5 October 1882, who later tacked 'Louis du Cane' in the middle, so ... he ended up as a cinema manager) and Florence Mary (b 1884) seem to have been rather ephemerally attached to the theatre, likewise Ferdinand's son Louis du Cane Oppitz, but Alice ... Alice achieved. 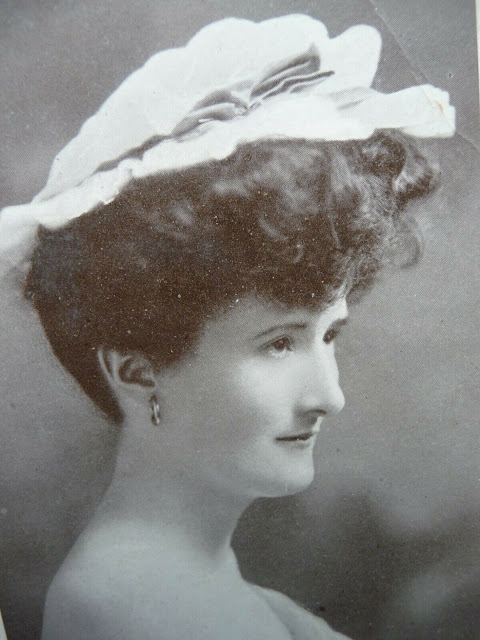 Alice joined the D'Oyly Carte at, apparently, age sixteen or seventeen, and the archivists have her possibly on tour in South Africa, and in 1897 in Britain. I spy her singing the Plaintiff in Trial by Jury and Casilda in The Gondoliers, but she apparently also played Lady Angela and Princess Zara, before taking a sidestep to the Savoy where she sang in the chorus of The Beauty Stone. I imagine she was there as an understudy, perhaps to Ruth Vincent, for when the Lucky Star company was sent out, that is what she went as. But this time, she went on. She replaced Flora MacDonald as Princess Laoula for a week, and was then hoisted into the star role of Lazuli. She won superb notices, predicting for her a first-rate career with Carte, but that was not to be. On the Carte staff for the tour was a gentleman by the name of George Mewburn Slater (1870-1949) ...

Slater, too, came from an interesting family. You can read all about it at http://www.craig-telescope.co.uk/life_slater.html. His career in the theatre was to be long, provincial and all-embracing, ranging from early years of performing (1894 'his musical entertainent', Minnie Palmer's The School Girl, The Late Mr Castello), to various management functions, for managers from Carte to Julian Wylie, to penning a panto or two. Anyway, he would marry Alice, in 1900, after she had finished playing Prince Ferdinand in Puss in Boots at New Cross.

For the next couple of years, I spy her only in pantomime (Puss in Boots 1900-1 Stoke Newington and tour, Robinson Crusoe at Aberdeen 1901), before she joined George Edwardes's companies, touring as Donna Teresa in The Toreador (1902-4), taking over from Nina Sevening as Miss Pinkerton in The Cingalee at Daly's and then -- after panto at Lichfield -- playing more Toreador (1905), The Little Michus in town and on tour (1905-6) and succeeding to the star role of Molly Montrose in London's The Little Cherub. She was next engaged for Tom Jones (1908-9). Florence Smithson was the leading lady, while Alice played Lady Bellaston and probably covered the star. She was just thirty years of age. So ... why do I see her no more? 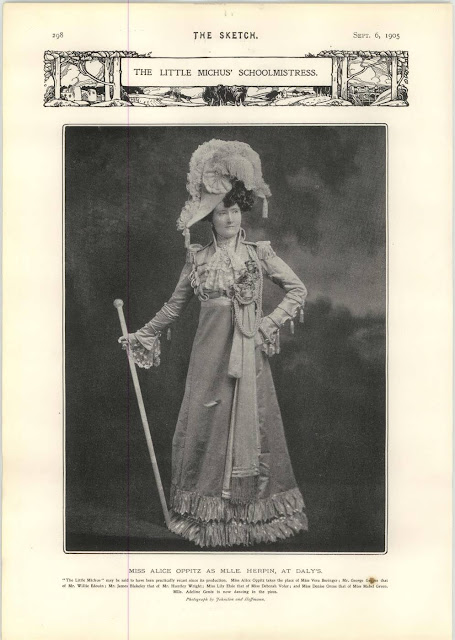 The tale of W[illiam] A[rthur] PETERKIN (b Edinburgh 2 January 1858; d The Hermitage, Flackwell Heath 22 March 1945) is an even more curious one. To me. He seems to have been equipped with all the necessities for a grand career, yet only in his work in Australia, in his forties, did he truly play on centre court.

He was born in Edinburgh, the son of a local very worthy, William A Peterkin (large obits), and his wife Elizabeth Mitchell née Barclay, and was set to the study of medicine. However, medicine did not appeal and the young, stalwart Peterkin, who had established himself as a championship sprinter (10.2 for 100 yards, 50.2 for 440) and representative footballer in Scotland, set out for the American west, to try his luck as a cattle-rancher. After which he went to Italy to study singing. The time frame here is a bit of a puzzle. I have him being a Scots medical student in 1881, and Signor Gilardoni's prize pupil at the Lyric Dramatic School, Ealing, in 1882 ... then nothing for more than a decade. So I guess the 80s and early 90s were when he went a-wandering. Yes 'he lost money ranching in Texas' (ah! he had money to lose?) and then (1890-2), deeming it possible to make money from his big bass voice, went to Naples to study under Scafati... OK, its falling in to place. 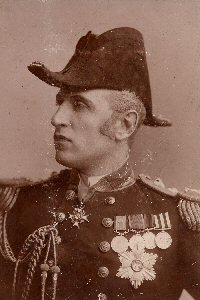 When he turns up to my gaze again, he has joined the Carte organisation. He played in Utopia (Limited) in America and on the British road, and then went to the Savoy, where he covered Scott Fische in the role of Ferdinand de Roxas in The Chieftain. And then he abandoned the stage, almost forever. In the 1901 and 1911 censi, he describes himself as a professional vocalist, so my theory that he had a day job, to account for his curiously thin palmarès of engagements over the next decade, doesn't wash.
For several years, apart from the odd smoking concert at such as the Bohemian Club or the Press Club, he seems to have sung almost exclusively at the Promenade Concerts at the Queen's Hall (one paper said he was a 'pupil' of Henry Wood. At forty?), at Scots concerts ('My Peggy'), and at Belfast, where on one occasion he depped for Albert Archdeacon in The Messiah. I see him giving his eternal 'The Sailor's Grave' at Dover with Antoinette Sterling, and playing a series of concert dates with that lady and soprano Margaret McIntyre in 1898. In that same year he sang in The Martyr of Antioch with Esther Palliser and Ada Crossley, sharing the bass music with Robert Radford. And then it was back to the smoking concerts, the Queen's Hall, the Scots songs, and a bundle of engagments singing in support of the Biograph in variety houses. In 1901, in a precursor of the 'three tenors', he and fellow bass-baritones Robert Grice, Reginald Groome and Wensley Russell formed a group which they called 'The King's Musketeers, to play the Empire Palace Theatre. In 1901, also, he married. His wife was Ann Maria née Baker, who sang a little under the name of 'Marjorie Nairne' (b 23 December 1869).

In 1903, however, he got a real job. He was hired to go to Australia, supporting the ageing Edward Lloyd in a concert tour. He was a decided success, and when the tour finished he was snapped up by J C Williamson, for his concert party, and then for Ada Crossley's Australian tour. He sang 'She Alone Charmeth my Sadness, and 'The Sailor's Grave' and 'Arm, arm, ye brave' round Australia, and Marjorie got to sing too, on occasion. When Ada sang in Elijah in Melbourne, Peterkin sang the role of the prophet.

However, when he returned to England, it was back to the old ways: singing on programmes top-billing Sena and Phyllis Dare, George Robey or Violet Vanbrugh, concerts at the London Morayshire Club and, eventually songs on the radio. Just once, he returned briefly to the musical stage, to play in The Chocolate Soldier, and the Australian press hopefully paragraphed that he would come back down under to repeat his role. He didn't. He'd given up a-wandering.

He and Marjorie settled down in retirement at Wycombe, where they can be seen in the 1939 census. Peterkin died in 1945, and Marjorie in 1952.


Hmm. I seem to have rather neglected the Letter "P". I've done Pounds, Petrelli, Power, Pepper, Parris, H G Patterson, Phyllis-Maguire, Pierson, Presano x 5, Purdon, Pyne, 'Brandon Phillips', Annie Palmer, Alice Pennington, Alice Pilon, Pfau and, now, Peterkin ... I've no need to do folk such as Esther Palliser, W S Penley and 'Annie Pelham' (an ancestor of my chief US helper) who have been thoroughly covered by others, or 'H Payne' who became Ernest Pike, or Sydney Paxton who wrote his own memoirs. I've already covered Mrs Howard Paul, Ilka Pálmay, Passmore, Pounds x 6, et al in my Encyclopaedia of the Musical Theatre, and Mrs Paul at vast length in my Victorian Vocalists, I've admitted defeat, if I remember, on Miss Louise Pemberton ... but there are still a number of P-folk whose dates of service begin with and '18' rather than a '19'. Harold Poole, of course, became W H Kemble ... so he's 'done' ... which leaves ...
G M Palmer, 'Fred W Pattrick', George of the Paulton family, James Paxton, Arthur Payne (surely not Mr Arthur Locksley under his real name!), Americans Harry Pepper, Marie Pfeiffer, Dora Percival and Irene Perry, Miss A Percy, my 'old pal' from Soldene days, Juliette Piemonte (whose file vanished in a flood of dorper lamb juice last year), William Plimmer again, Florence Plowden, John Pope, J H Poskitt,
Laura Proctor, Charles Prescott, Minnie Pryce and oh dear! those Perry sisters! I thought I'd done them, and also Sydney Price, but evidently I haven't. Powis Pinder, too. And I would like to try harder on Catherine Pelling ... 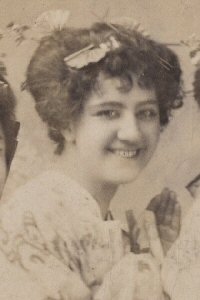 The splendid Florence Perry
But I think I may be excused crushing my nose into Mr Page, Mr Pink, Mr Perry, Mr Plattee, Mr and Miss Phillips, Mr and Miss Parr, Miss Parsons, Miss Prince, Mr E Pearce, the various daughters of Anglo-American tenor Ernest Perring, the non-existent 'F Petrelli' ... and who in the devil's name is 'Miss Pisetu'?

Well, maybe I'll give them a short sharp go tomorrow ...

'Mrs P' will be watching from her new favourite Perch, outside my study window .. 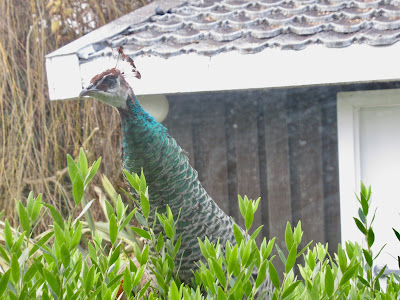