.
The vocalist Ethel Wilson has always somewhat slipped past me. Perhaps it was the unmemorable name. But when I decided to tidy up her tale, I got into a muddle. Which of course, was a challenge. So Ethel has had half a day devoted to the winkling out of her background ... and the winkling wasn't easy, until it finally fell into place. More or less. So, here you are 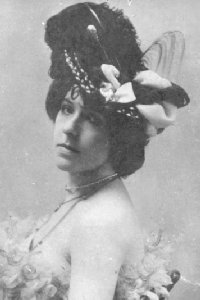 Ethel WILSON (b ?London 3 April 1869; d Slinfold, Horsham 24 October 1941).
Yes, nice round facts and figures, but ... who was she? I always distrust 'born London'. Unless, of course, it's a landlady entry. Most folk are more specific as to district, or even street. And the birth records show only one Ethel Wilson born in the relevant quarter: in West Derby. Hmmm. Parents, then? Hasten to the marriage certificate. Husband's details all filled in: Ethel's? Despairingly blank. Not even a fib. Just blank. Delve.
Once upon a time, in Agra, Bengal there was a surgeon by the name of Robert Brown (b 1 July 1791; d Digha, Dinapur 15 March 1853). I see him listed in actions at Jitgarh and Mukwanpur, in the third Maratha or Pindari War, agt the capture of Manda, and the storming of Bharatpur ... in amongst which he married one Sally Dixon (1824) who gave birth, at Agra, to a Sarah Susan Brown 28 April 1825. (Don't worry, we're getting there). Said Sarah married James W Wilson, an indigo planter, and gave birth to two daughters in India, before the couple returned to Britain -- Ilkley, to be precise -- where a son was born, and where Wilson died, at the age of 38.
Quick fast forward to 1881. Sarah Susan, after a period in lovely St Brelade, is living in England (I suspect she might have gone back home in between), with her semi-posthumous son, aged 25, and a granddaughter, aged 12. Born London. Well. She is evidently not James's daughter ... and one has to come to the conclusion that she mus be the unofficial child of daughter Sarah Margaret (b Dinapur 5 February 1847; d Buckhurst Hill 17 February 1884) or daughter Mary. And thus the blank on the wedcert. Ah! What is this? Sarah sr, James, and Sarah Margaret in Upminster in the 1871 census ... with a 2 year-old Ethel. Born Bengal. Surname ... Graham. I think our Ethel may not have been fatherless, after all ...
Mary who went back to Bengal, apparently married, in 1874, a Trevor Lloyd and had 5 children, Sarah Margaret married in 1873, Philip Melancthon Holden, rector of Upminster, and had one child. Well, I don't know ... What is the reason behind the subterfuge? It's all too, too Secret Garden to be true ...
So, enough time spent on Ethel's antecedents. We move on to 1891. She is still living with Sarah Susan and James, plus two little Lloyds, and ... 'professional singer'. Ethel had attended the Guildhall School of Music, where I see her performing Tennyson's 'The Victim' 'effectively' at one of 'Olfred' Nelson's Elocution displays. And a few weeks later she made her professional stage debut, at the Court Theatre, playing the part of Rose in a revival of the popular A Pantomime Rehearsal, alongside the young Ellaline Terriss. After the two months run of the triple bill at the Court, I don't see Ethel again until 1894, when she has joined the Savoy company, playing Nina in The Chieftain. She remained at the Savoy for some three-and-a-half years, playing small parts in The Grand Duke and The Beauty Stone, and she married one of her Cartesian colleagues (16 September 1896). 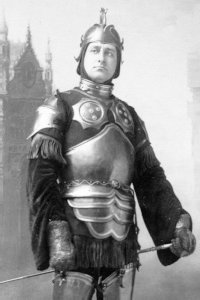 At the end of the run, the couple retired and, with their son, Dennis Cory James (b London 11 August 1897, d Paris 31 October 1952), left England. Not for the usual Australia, America, Africa or even Ethel's India, but for Gran Canaria. Their second child, Andrew Daniel Cory James was born there 14 December 1900, followed by a daughter, Lucy. And there William died, aged 46, in 1910. His grave can be seen to this day .. 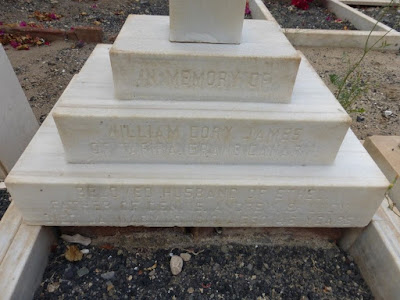 I'm sure there was a reason for Las Palmas. I think James had been there before, so maybe a family connection? Or just the theoretically healthy climate. At some stage thereafter, Ethel went back to England. I see her in the 1939 census, living alone in the Horsham area. And she died there two years later ...

And here is the Vincent Daniels photo which started all this off .... is this or is this not a photo of Ethel in The Chieftain? 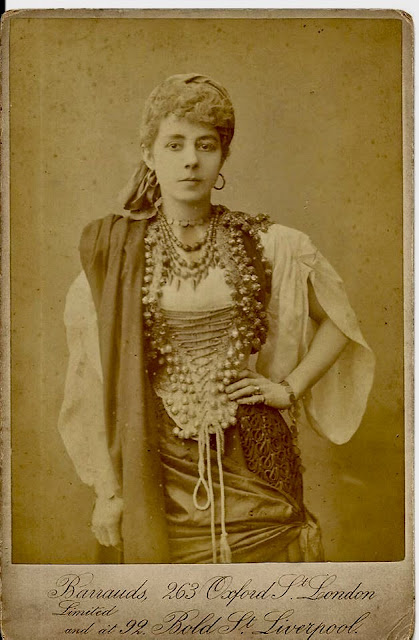 The Comelli costume design has smiliarities 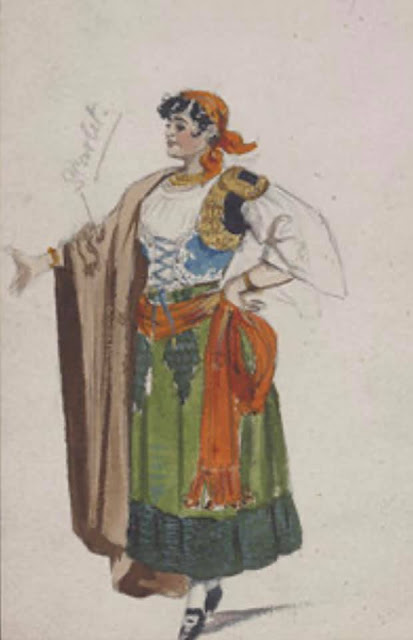 but, as David Lovell pointed out, the photographer's address seems to be wrong ...
Maybe this lady is costumed for Ruth in The Pirates of Penzance ... 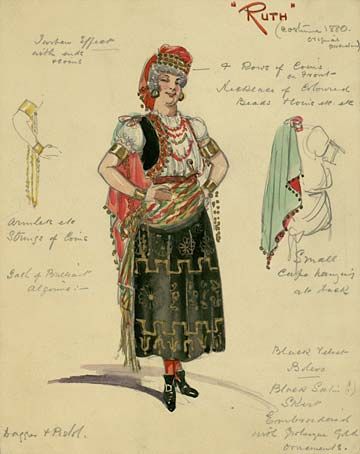 Nothing is ever easy. And who was Mr Graham?

Katie Barnes and Vincent Daniels have sent me more Ethels with which to decorate this article ... 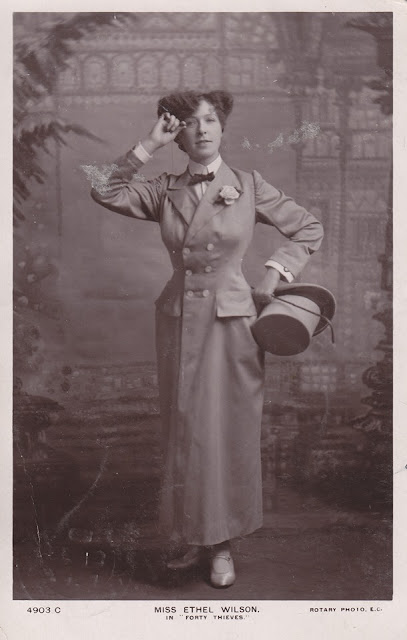 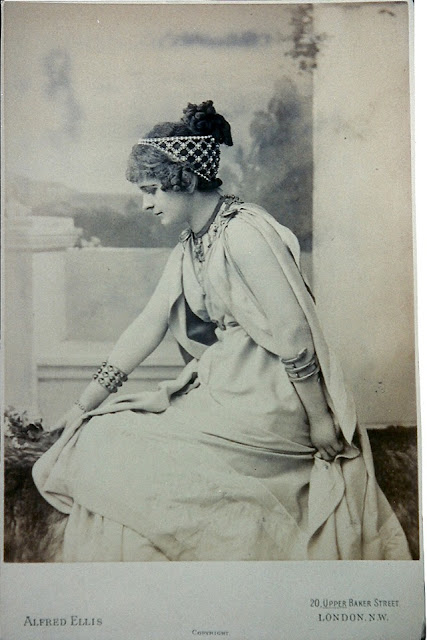 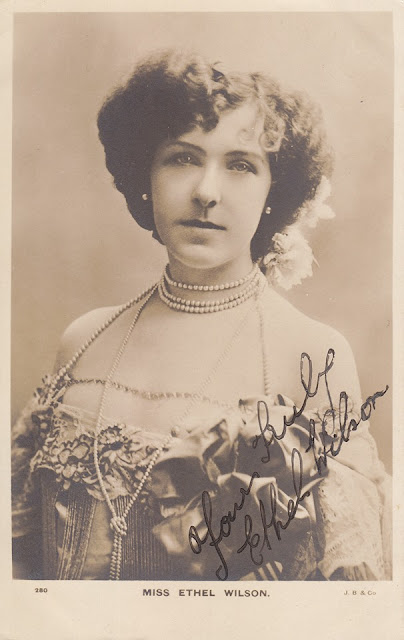 The Chieftain was 1894 and Barraud left Oxford St in 1891. The question is whether Barraud would ever use 3 year old mounting cards for cabinet photos once they had moved studios. A relevant piece of information may be that this photo was bought as one of a large batch of cabinet photos which seem to have once been owned by a theatrical agency. This photo was accompanied by a set of a children's version of "Mme Angot", 2 sets of touring versions of Falka, a set of Marjorie, the Beauty Stone and Nautch Girl as well as a miscellaneous folder. My suggestion is that the alleged Chieftain photo might have been intended for professional use only and as it was not for public consumption may have been printed on old stock card to keep costs down.
Vincent Daniels