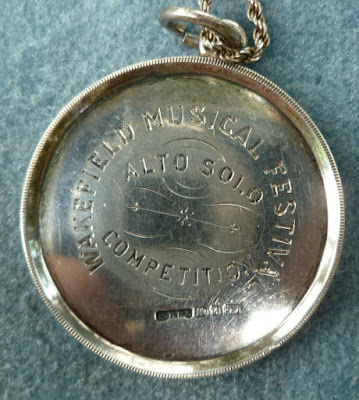 This is another wee treasure. I knew what it was, the moment I saw it on e-bay. Yes, it's a prize medal, allegedly from 1893, from what has been claimed as the first competitive Eisteddfod in Britain. And it did not take place in Wakefield, as in Yorkshire, it took place in Kendal, Westmoreland. The 'Wakefield' part came from the name of the founder of the event: contralto Miss Mary Wakefield.  Miss Wakefield was a very superior amateur vocalist ... but, here, read all about her and her career and her competition, in this little piece I wrote a year or two ago for my Victorian Vocalists:

It’s my self-imposed rule for this collection that I don’t ‘do’ people who’ve already had a whole biography devoted to them by someone else. But the splendid little memoir of Mary Wakefield published in Kendal by Rosa Newmarch (1912) probably didn’t get far beyond Westmoreland, and in any case it deals largely with the woman and her achievements rather than her singing career.

Miss Wakefield was an amateur. Probably – along with ex-professional Nita Gaetano (Mrs Lynedoch Moncrieff) – the outstanding amateur vocalist of her time and place. She was an amateur not because of any lack of skill, but simply because the wealth and position of her family meant that she had no need to become professional. And thus, she spent the whole of her career singing, principally, at those frequent ‘charity’ concerts, fetes, bazaars etc mounted by the aristocratic, the highly-social and the wealthy, at first in her home area, later in London, and eventually all around Britain.
Mary was one of the seven children of Mr William Henry Wakefield of Sedgewick House, Kendal, banker, JP, sometime Mayor of Kendal, High Sheriff of Westmoreland and ‘enormously wealthy’ and well-connected, and his wife Augusta Catherine née Haggarty, whose father was at one time US consul in Liverpool.
Miss Newmarch relates how she studied voice at school, in Brighton, with Ercole Mecatti, and subsequently in London with Randegger, and made her first appearance in a public concert in 1873 in a local charity affair staged by her aunt. I spot her first in 1876 (2 June) at that mecca of the society amateur, Grosvenor House, singing contralto in one of the Misses Robertson’s church-roof concerts along with such ubiquitous inhabitants of such occasions as Charles McCheane and Charles Wade.
In 1877, I see her singing Hercules alongside Lady Agneta Montague, Lionel Benson, the Hon Spencer Lyttelton, Countess Cowper, and her friend Miss White, with the Guild of Amateur Musicians, and in 1878 at Kendal, Worksop, Chester et al, in the company of the well-known Major Simmons or Sir George Cornewall, as well as in more functions at Grosvenor House.
She touched on the professional world (Gertrude Cave-Ashton, Harper Kearton, Thomas Brandon) when she sang the contralto music in Joshua at Morecambe (1878) or Eli at Lancaster with Catherine Penna, Redfern Hollins and Cecil Tovey, but mostly she appeared at amateur or perhaps society semi-pro occasions where she shared a platform with such as the Henschels and Charles Santley as well as Mrs Ronalds, Theo Marzials and other socialites (‘Roeckel’s ‘The Vision of Years’,’Rendimi al cuore’, ‘A best yet present’, ‘Darby and Joan’, ‘Sleep dearest sleep’, ‘Cangio d’aspetto’, ‘The Sands of Dee’, ‘When the children are asleep’, ‘Cherry Ripe’, Mignon gavotte, &c).
In 1880, she was engaged to sing in the Three Choirs Festival at Gloucester. Her contribution was small, but it included the contralto music in Leonardo Leo’s Dixit Dominus, and she was praised for her ‘beautiful voice and well-ordered method’. She sang The Messiah at York, with Mary Davies and Edward Lloyd, appeared at St James’s Hall with Marzials in the Boosey Ballad concerts (16 March 1881) and repeated the Dixit Dominus at St James’s Hall with Anna Williams. But she apparently decided not to go that way, and returned to singing in society concerts, at the country homes of the rich and aristocratic, and with local societies, with only the occasional foray into provincial oratorio (Samson at Lancaster, St Paul at Exeter).

At the same time she had her first successes as a songwriter. She had been composing songs since 1875, but now she published ‘A Bunch of Cowslips’ aka ‘Polly and I’ and ‘No Sir’, both of which were to become concert favourites. Others, such as ‘Shearing Day’ and ‘Moonspell’ would follow.
By the end of 1883, a provincial paper could rightly aver that Mary and Nita Moncrieff ‘stand quite at the head of lady amateur vocalists’, adding that Miss Wakefield ‘excels in the semi-humorous, semi-pathetic style’.
She continued her society vocalising through the 1880s, still stepping out occasionally to sing with the professionals at Charity Dos, in the odd oratorio (Elijah with Mary Davies, Hirwen Jones, Thorndike in Belfast, Lobgesang with Mrs Hutchison and Ben Davies in Rotherham) and made quite a stir when she delivered the whole of Schumann’s Frauenliebe und leben in London and the provinces. In 1894 she performed Die schöne Müllerin and Frauenliebe in a programme at Prince’s Hall. In the1890s she was seen round Britain lecturing on ‘Scottish Melodies’, ‘English National Melodies’ and other such topics which allowed her to sing some 20 songs in an evening.
Amongst her other activities, she established in 1885 and ran thereafter, with her sister Agnes Argeles, the [Mary] Wakefield Music Festival in Westmoreland, on the lines of the Eisteddfods. Miss Newmarch claims this as the first instance of a competitive festival in Britain. The Festival in held, bi-yearly, to this day (www.mwwf.org.uk/)
.
Struck by poor health, Mary Wakefield largely ceased her musical activities in 1900, but she lived on till 1910 when she died in her home in Westmoreland aged 57.