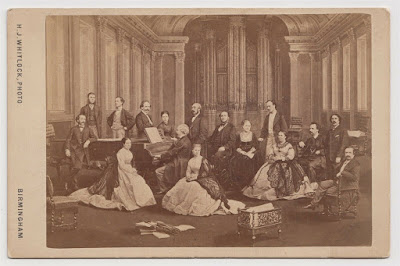 This has got to be my favourite item from my morning trawl on e-bay. A composite team-photo of the stars of the 1867 Birmingham Festival. But who, I pondered, was each person. I am not very good at identification, but nevertheless, even I could pick out Charles Santley, Sims Reeves, and Willoughby Weiss at the extreme right. And Christine Nilsson, centre front.

That left Therese Titiens, Helen Lemmens-Sherrington, Janet Whytock-Patey and Charlotte Sainton-Dolby ...  presuming that Arabella Goddard missed the photo call... well, it must be Patey behind the piano, Dolby at the left and Sherrington at he right, but that doesn't look like Titiens in black! Shuffle and cut again ..

And the men? Well, W H Cummings is there somewhere, it must be he looking as if he's seven feet tall, next to the other singers  ... oh, I know some of those faces so well, but ... is that Sterndale Bennett with his hands on his hips? His Woman of Samaria had its first performance during the Festival. That's Costa looking pompous, behind la Nilsson, yes? And there's no mistaking Julius Benedict, next to Bennett ..

Well, the National Portrait Gallery tells me that ones I haven't pinned are J F Barnett, Prosper Sainton, the organist James Stimpson and Cummings. But that only makes a total of ten, and there are eleven chaps in the photo. Who is missing? W G Cusins, perhaps, who conducted the premiere of The Woman of Samaria? Ah! Here's a little story ... 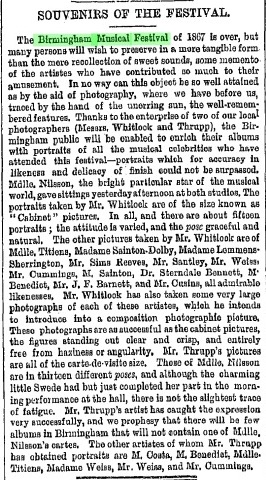 So, it looks as if it is indeed Cusins who is our spare man. And Miss Goddard didn't hang around to be photographed.

"Costaffective"made me laugh — a rare pun.