Who was who in Arthur Sullivan’s ZOO

The little musical play The Zoo, score by Sullivan and libretto by B C Stephenson, had a life of only a few weeks in the nineteenth century. But the ‘rediscovery’ and publication of its score in the 20th century has led to the piece finding its way into the modern repertoire and onto disc, as well as into all sorts of Sullivan-orientated books and websites. And there, as often as not, we find facsimiles of the original playbill … 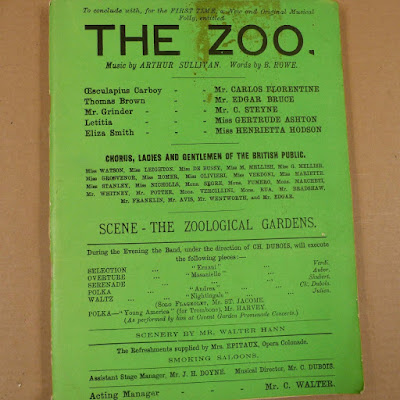 Does anyone ever ask, ‘who were these people?’. Well, Gilbert scholars know all about the horrid Henrietta Hodson, adulterous member of a grand theatrical family, ultimately wife of the even horrider Labouchère of parliamentary infamy, and a sometime burlesque actress, who got into an oft retold war of words with WSG. Edgar Bruce, too, is rather more than a footnote as a producer and actor.

But what about the juvenile singing couple? Carlos Florentine? Is that for real? Gertrude Ashton? I knew that was a stage name, and I knew something of her brief life and musical career …
So a few years ago I decided to find out more.

Gertrude turned into a rather long article, so I’ll post her later. Also my photograph of her is in New Zealand and I’m in Australia. So let’s start with Carlos. I don’t know of the existence of any portrait of him … so until I dig up some pictorials, there are I’m afraid no illustrations here. But there’s plenty of text!

I don’t know whether Mr (or Signor) Carlos Florentine was really thus christened or not. We have only his death certificate, on which he – well, someone -- says that his father was James Florentine, and his mother Elizabeth, to go by. Strangely they (and he) do not seem to appear on any census papers or in any other records.

The New York Heraldrelated, by way of an obituary, a tale of him living among the Indians in the far West, singing to the trees, until a stranger told him to go have his voice trained, so off he scooted to Europe. Yes, well, maybe.

To tell the truth, I really wouldn’t have bothered about investigating Mr Florentine, except that, for a few weeks of his life and minimal career, he created and played a role which has made him reference-book and Internet worthy.

The first sighting I make of Carlos, is at 27 years of age, arriving in Britain aboard the Celtic, from New York,31 October1874. In the following months, he managed to get himself – with apparently no previous stage experience – hired by Marie Litton, on a three years contract, to open with a short season at the St James’s Theatre, 27 March 1875, playing the small part of Yussuf, the slave dealer, in Brough’s Conrad and Medora,as an afterpiece. His ‘first appearance on any stage’ was greeted indifferently: ‘a very fair voice and some skill in using it, though a few faults excusable in a novice were perceptible’, ‘good make up and a very musical voice’, ‘failed to produce the success that was expected of him’.
Half way through the season, Miss Litton changed her afterpiece, and produced a new burlesque operetta entitled The Zoo. Henrietta Hodson who had starred in the burlesque was again the star, with the singing actor Edgar Bruce, and with Mrs Cave-Ashton brought in to give vocal values as ingenue. Opposite her, Mr Florentine played Aesculapius Carboys, a lovesick apothecary. Henrietta Hodson and Bruce stole the show, Mrs Cave-Ashton sang delightfully, and Florentine was dismissed in a few words. ‘Sang smoothly’. After a few weeks, Miss Litton’s season ended, and Bruce took the piece to the Haymarket for a fortnight. And then Miss Litton decided she didn’t really need Mr Florentine for three years. Or, actually, any more at all. But she had given him his place in musico-theatrical history: for The Zoowas composed by Arthur S Sullivan.

Mr Florentine said he was off to Italy to study for the opera. The press commented sourly: ‘He must study acting also, for at present he is a mere novice’. But he didn’t go. He went home.

He came back to London for the next two seasons, and got himself a spot for several months at the third-rate concerts at the Royal Aquarium (‘The Mountebank’ by Vivian, Weidt’s’ How fair thou art’, Levey’s ‘The Happiest Land’ &c). On one occasion the American Signor shared a bill of Irish ballads with the German Mathilde Zimeri. He sang at Jennie Lee’s Benefit, Wilhelm Ganz’s at home, Mr Greenhill’s concert at Langham Hall (Pinsuti’s ‘The Raft’), the Alexandra Palace Proms (rather on a par with the Aquarium), at Rivière’s proms under Alfred Cellier, and when the Chicago musician, S G Pratt, mounted a London concert he lined up with Mesdames Valleria, Sterling and Rosavella and Signor Foli on a very transatlantic bill. He also (2 July 1877) staged a concert of his own with Sterling, Liebhart, Enequist and Foli billed alongside some nonentities.
At the same time, he immersed himself in London men’s club musical life: I spot him at a meeting of ‘The Circle’ alongside Comyns Carr, Alma Tadema and Walter Pelham.
However, the adventure came to an end 25 April 1878, and Carlos took a ship from England back to America for the last time.

His obituary (and, amazingly, he had several) claimed that he did not make music a profession when he returned home. But it looks as if he tried to. He became attached to several churches, notably George H Hepworth’s Madison Avenue Church, he sang occasionally in concert and sponsored his own, from Chickering Hall (24 November 1879) to the ill-named Grand Opera House (11April 1880) to the Scottish Rite Hall, he became the musical relief to lectures serious (Dr James L Harley) or humorous (Alfred Post Burbank, stereopticon), and he even returned to the stage and Sullivan’s music when he was cast as Colonel Calverley in Patiencein Blanche Corelli’s very tatty touring company. He joined up for a while as a minstrel with Haverly’s Mastodons and Haverly also used him in The Merry War in the 1882-3 season. In 1883, he played on the road with Eugene F Gorman’s Criterion Company. Charles H Drew was the vocalist, and Carlo (sic) was listed as ‘comedian’.

Finally, he settled down as a church singer in New York, ultimately at the Presbyterian Church at 123 West 12th Street. If he had a day job, nobody mentioned it. He still appeared here and there in lesser concerts – as late as May 1890 I spot him listed on a variety bill at the Tabernacle, Jersey City.

I don’t think he made it. That week, he died ‘of pneumonia and heart failure’, aged 42, leaving a wife (?) of whom the tale is told in another of my articles. She was the divorced wife of Brooklyn basso ‘Signor Brocolini’, née Lizzie Fox, and the who-was-to-blame tale of that disaster is told under Brocolini. She doesn’t appear in censi after her remarriage either.

And that was the life – the professional one anyway – of Signor Carlos Florentine, who would be quite forgot had Marie Litton not produced three weeks of a little afterpiece …

Posted by GEROLSTEIN at 5:54 PM

I enjoyed the bio.
The Zoo played as a companion piece with W. S. Gilbert's comic play, Tom Cobb, from 5 June to 9 July 1875 in its original production at the St. James Theatre and then at the Haymarket Theatre (a total of 5 weeks). It was successful enough to be revived at the Philharmonic Theatre, Islington, from 2–30 October 1875, with Richard Temple as Thomas Brown, where it ran together with Offenbach's Les géorgiennes.

Other producers were interested in reviving it, but Sullivan prevented its production. Allen quotes a letter of 22 June 1877: "Mr. Sullivan begs to inform Mr. Cowper that the 'Zoo' has not yet been published, nor will it until considerable alterations have been made." The same year, Sullivan wrote to his friend Alan Cole: "They want to revive the 'Zoo' at the Strand. Will you rewrite it with me?" Nevertheless, it was revived at the Royalty Theatre from 14 April to 3 May 1879, with Lottie Venne as Eliza and W. S. Penley as Mr. Grinder. Sullivan is not known to have made any revisions.