Gay times at the Criterion Theatre ...

.
My old boss, the unforgettable Harold Fielding, goes down in the history of the London musical theatre as the producer of musicals for the millions. The coach party king. That's a bit right, but only a bit. Harold and his right hand (wife Maisie) and left hand (associate Ian Bevan) back-roomers did more than just mount popular shows -- from Cinderella, Half a Sixpence, Showboat, Irene et al to Barnum and Singin' in the Rain -- for the charabanc public. His name appeared at the top of the bill for two of the 1970s's most 'liberated' musical shows: the long-running Let My People Come at the Regent and the revue Hulla Baloo at the Criterion.

Let My People Come was still running when I joined the company (Ian had the job of casting it), but Hulla Baloo had gone its way so I never saw it. But it sounds good, camp fun:


'The curtain rises to show a public convenience with 3 cubicles on either side of the stage and that more or less sets the tone of the humour for the rest of the evening. Rogers and Starr score early on with one of their popular numbers ‘Rape’ and again in the second half with their famous ‘Beyond the Freud’ number which was so popular with the audiences at the Hampstead Theatre Club where they had 2 successful seasons of late night revue 2 years running. Roy Starr repeats his amusing ‘Dear Marje’ takeoff of Marjorie Proops, and Michael Rogers follows with his rather cruel Dietrich impersonation, descending the toilet stairs impeccably gowned in a transparent salmon pink shimmering dress.
In the second act the two of them proceed to demolish ‘Gone With The Wind’ with their hilarious portrayals of Mammie and Prissie the maid. It was interesting to note how enjoyable Jimmy Edwards can be when he stops ad-libbing. His talk on gardening ‘Are you listening, Mary Whitehouse?’ involves some useful information on the growing of roses: ‘First get your beds ready, go easy with the trowel and don’t give ‘er more than 5 inches to start with…’ and he gets good participation from the audience with his song about Enoch Powell. Chelsea Brown looks good and has several numbers to sing, including the title song, an obscure Duke Ellington number ‘Tulip or Turnip’ and one of Michael Rogers’ own songs ‘Powder My Back’.'
And I find I have a souvenir of it. Amongst my C19th playbills, I have found this costume design. 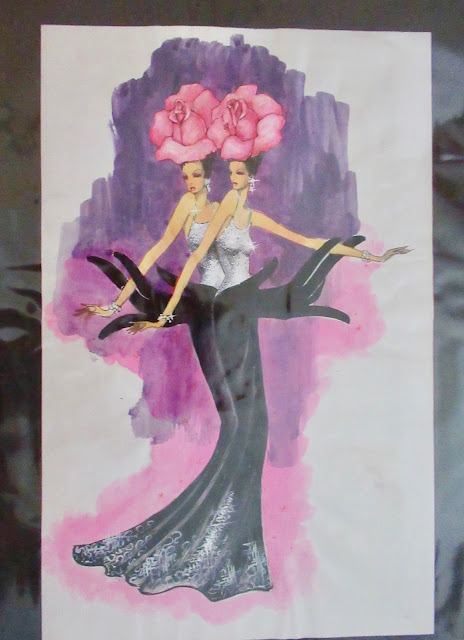 What on earth shall I do with it! Should I put it on eBay? Or should it be in Gay News, or a Gay Museum ...