YOU SAW IT HERE FIRST, or "Superhero"


Ever since I hit Europe, I seem to have been running. From one theatre and concert hall to another. I’m not complaining, after all, that’s largely what I’m here for. But after a month, I’ll be grateful for a few days rest from music and theatre.
So what happens on day one of my ‘holiday’:  I get handed a demo disc for a new musical. By people of consequence.

Now, they didn’t have CDs in the days when I sat behind a big desk in Mayfair’s Hill Street, charged with looking over the pile of unsolicited musical-theatre scripts and tapes that came into our office, in the hope of finding that elusive bit of gold. My late partner found Jesus Christ Superstar. In eight years – no, more! I found nothing. Not one piece worth investing in, not one piece worth producing.
And, judging from some of the shows I saw that were produced by other people, round that time, other producers were just as starved.

But am I wrong, or have things improved? I have seen in the last two years a couple of new scripts of which the authors actually can write. Have imagination, Humour. I don’t know quite how these shows and writers came my way, thoroughly retired from the theatre as I am. But they did.

I always made it my rule never to listen to a taped score until I’d read the libretto. I mean, if you’ve got no libretto: you’ve no show. And I can say pretty largely that I always stuck to that rule. But today – lazing at my Berlin desk, with the coffee ready and the correspondence answered – I broke it. I picked up yesterday’s CD and put it on. 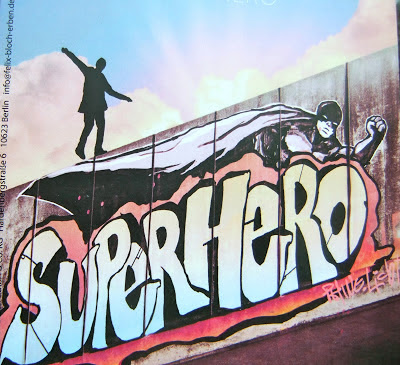 Six numbers on a demo do not a show make. And I shouldn’t even put fingers to keyboard, until I’ve read the libretto. But, call it an old man’s vanity, I want to say ‘you saw it here first’.

So when SUPERHERO (P G Brown/A McCarten) hits the stage – in German or in English (it exists in both) -- and I’ve no idea whether it is already snapped up and/or scheduled – remember, Kurt Gänzl told you first.

When the song ‘Frozen Ground’ hits you between the breastbones – remember, I heard it first.

And watch this space. Where’s my phone…? Can I speak to Harold Fielding, please...?

Posted by GEROLSTEIN at 5:29 AM