After my disillusion of yesterday, I thought I might give the theatre a break for a bit. But, first, I had a date for tonight. My friend Thomas was presenting an English-language night at his famed Quatsch Comedy Club, and Paul and I were invited. 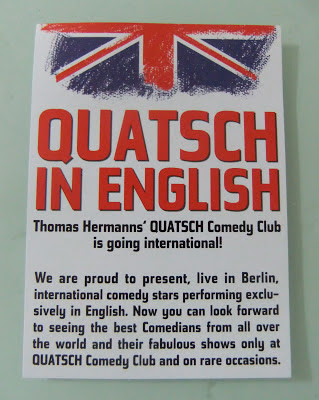 Ever since I first clapped eyes on the glorious little theatre that houses the Club, three years ago, I’ve longed to see it in action. It is the most perfect little ‘music hall’, complete with a lovely balcony with bar, tables and chairs, all in royal crimson and gold … I wish that I still sang when I see a salle like that! It makes you want to perform. 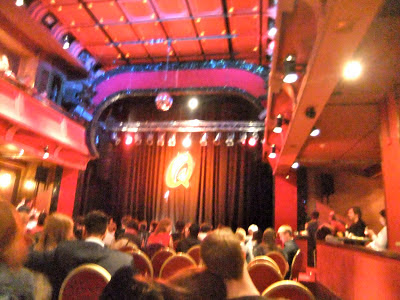 Well, we surely saw it in action last night! We arrived nicely early, to find a jam at the mini-boxoffice. The room was sold out, there were thirty hopefuls waiting for ‘returns’ and the woman in front of me would not take ‘nothing left’ for an answer! We finally moved her on, and were led to our table to be served by a delightful waitress … why are servers in Germany so much more agreeable than er elsewhere? …  I dared a glass of wine, Paul – in the spirit of the place --  ordered a Shirley Temple cocktail (alkoholfrei!) … shocking pink! 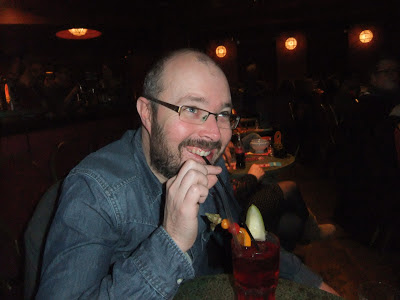 The stage entertainment for the night was Dylan Moran, an evidently well-known Irish comedian (he has telly credits on his poster), and ‘entertainment’ is exactly what he was. Gone – thank goodness -- are the days of Les Dawson and Jim Davidson and the joey joey joke, one punch line a minute. Mr Moran chats to you. Sure, he’s got little set pieces which he slips in when the moment suits, but it is mightily agreeable not be hectored by a stand-up comic. And most agreeable that he performs in nice 30-minute chunks, with a nice 30-minute interval for more drinks and loo stops and friend-meeting. It’s a bit like meeting a fun feller in a pub, and listening to him hold the room. Which he did. The audience were sniggering 5 seconds into his performance and still laughing flat out 90 minutes later. 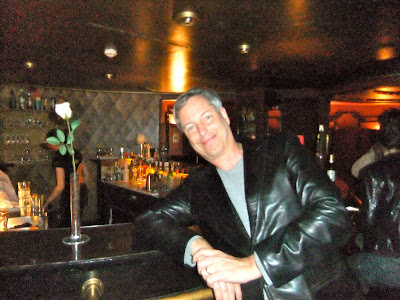 After the show, we adjourned to the balcony bar, to join mein Host … and to give him a jolly good hug!  My entertainment-metre was back on ‘high’. My faith in the theatre restored. All it takes is a packed house of pleased people, enjoying a pleasant unpretentious evening … that’s entertainment!, as someone once said. And my gosh, was that somebody right! 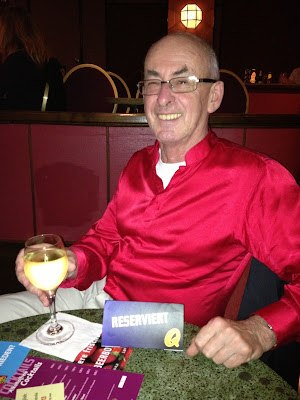 Posted by GEROLSTEIN at 3:31 AM