The Isle of Wight revisited.

Bis repetita. It’s a dangerous game. The mysterious ‘they’ say ‘never try to repeat a good trick’. But I have never taken much notice of all the things ‘they’ ‘always’ say, and here I am back in the Isle of Wight for the fifth time in six years. It would have been six, but for my year out with bad health. And what have I done? What I usually do anywhere. Started off by revisiting my favourite spots. Three, so far. Result: 2-1 to me. Hermitage Court Farm, of course, was an easy one. But I christened it, years ago, the Best B&B in the world, so it’s got standards to maintain. Answer: it’s the best B&B by miles. If I gave it 10/10 last time, it gets 12/10 this time. Its new makeover and extension (it now has 3 rooms instead of the original one) are a blazing success … well, I won’t go on, or else next time I come to book my month or two, it’ll be sold out. 1-0 to me. 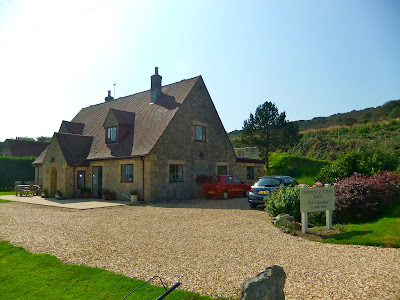 After a mizzly day out for recovery after my cavalcade, today I ventured a small trip to plenish my fridge with fresh picnic goodies. And, of course, I went to the Chale Green Stores. I knew the stores when they were a village shop. I had a memorable fresh roll there … Then they were whooped up into a fair bistro-cum-resto, with a nice little deli and some specialist foodie bits. Good for picnic things, and it meant I didn’t have to pay to park, as I did if I shopped at Goodman’s in Ventnor. Today? Oh dear. It’s obviously changed hands. The deli was empty of anything at all, the nice things were all gone, it was back to being a village shop with things in plastic and a tea-room. And they didn’t like my debit card. I won’t go back: I will have to brave Ventnor. Or Arreton. So One-all. ‘They’ were right this time. 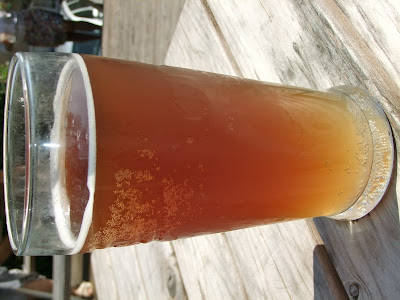 The weather was so glorious, I decided not to go home with my sad looking groceries. I headed on with thoughts of a pint of ginger-beer shandy and a sandwich in a pretty place. Shorwell? With the ducks? I wanted to go further, but I put in on the list for another day. Brightstone? Don’t like the coach party pub, maybe the ‘Seven’ tearooms … Aw heck, I’m more than half way to Shalfleet. I’ll try my old favourite, the New Inn. 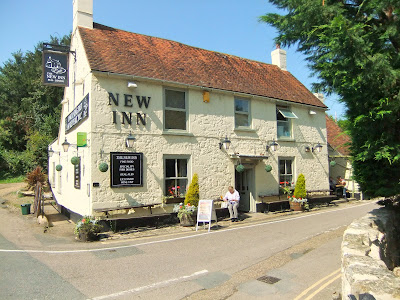 I was very wary. The New Inn has become part of a ‘group’, which includes the Boathouse at Seaview, which I cordially dislike. And they were advertising rather freely. Two bad signs. So last night I sent my fellow Hermitage Courters there for dinner. They were much pleased. So I rolled up hopefully. Looks the same, car-park the same, menu similar, staff efficient and pleasant (obviously not from the Boathouse), so I ordered my favourite light lunch: Black pudding salad and my ginger-beer shandy. Can there be good and bad in such a simple lunch. You bet! And the New Inn scored. 2-1 to me. The best ginger beer, a skilful shandy, wonderfully cold, and a simple collection of first-class pudding, tasty green leaves (no lettuce!) and dried tomatoes … no turgid dressing … a perfect lunch. 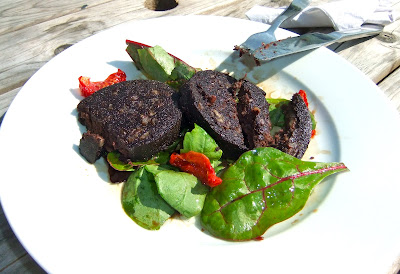 I am so glad. I like Shalfleet and Newtown, and now I know I can safely lunch any sunny day on the deck at the New Inn. 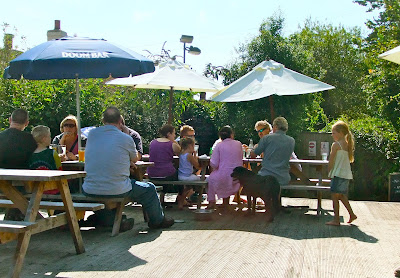 I’m going to like it here! Again.
Posted by GEROLSTEIN at 7:17 AM

I havent mastered the "new and improved" blogger. Which isn't improved at all. No spacing, no paragraphs, a right royal mess. I'm not sure I'll stick it out, uness they improve..
The shandy was bonzer :-)