A Long Time Between Blogs

Last time I sat down to write anything longer than a facebook message, I was still in Berlin. Now I’m up on the downs in the Isle of Wight. So ...? Well, last days in Berlin were rather hectic. I had to see and say ‘goodbye’ to all the dear everyones to whom I’d said ‘hello’ to a few weeks earlier, and with Paulie moving into his delicious new flat in Wedding (I want one! actually, I’ve asked for one) there was plenty of Ikea-type activity going on. Well, the flat, newly refurbished, didn’t have a kitchen! Friends came to the party, and a month later he’ll be able to boil his own egg! 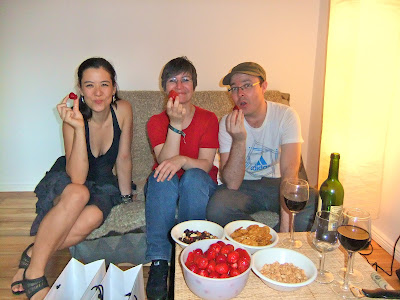 I said I hadn’t been writing, but that isn’t true. From Berlin, I flew (via Düsseldorf, for heaven’s sake, isn’t Berlin the capital?) Air Berlin to Jersey. Not pleasant, but it got better! Alex and Katy picked me up at the airport and delivered me to my cosy garden flat at the Bayview Guest House (again), I dined of course at the Dockyard on Chris Matthews’ delicious cooking, drank their bar dry, and fell into bed. My days in Jersey didn’t vary much after that. Up at eight, breakfast, into the garden (when warm enough) with my computer for a sustained attack on Victorian Vocalists till cocktail time, dinner at the Dockyard (the menu doesn’t bore, even after 40 visits), dally at the bar, bed (with sound-switched-off Olympic Games et al) and then the whole routine again. Victorian Vocalists is now approaching its 500th completed article, and it’s beginning to look as if I may finish it in my lifetime! 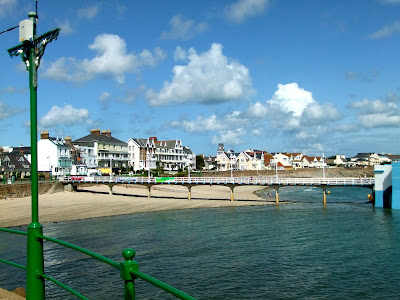 Of course, there were partial deviations from the routine: a visit to Alex and Katy’s new first house (they have a bed, a couch, a shower and a TV ... and a kitty …now they can get married), three birthdays – Alex, Chris and his Jennifer – the races with Jennie and the girls, dinner with Charlotte, some fine dining and fun in two extra-boozy lunches with my pals from the SCB, the jollity of the Havre des Pas festival (most of my photos seem to be at a table!), a bit of self-improvement with a facial at Elemis and a hair cut and extras from Jenny at Rio, new computer glasses from Howard’s, the odd hot spa tub in the garden .. and I still managed the fullest month of work on Vic Voc yet. 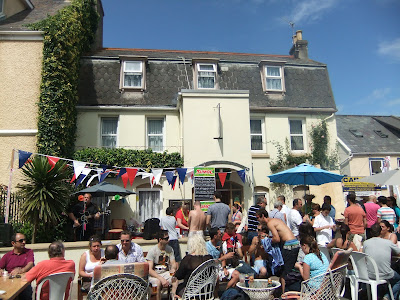 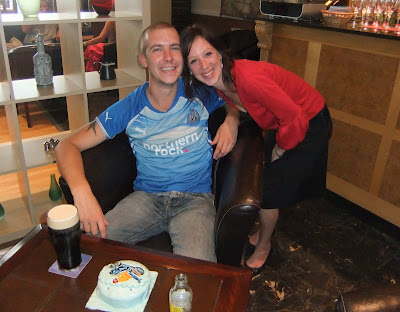 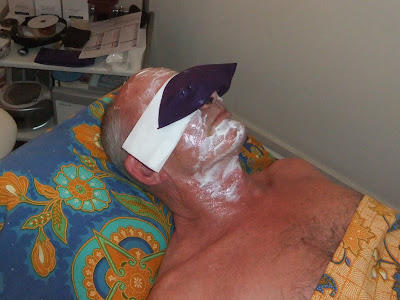 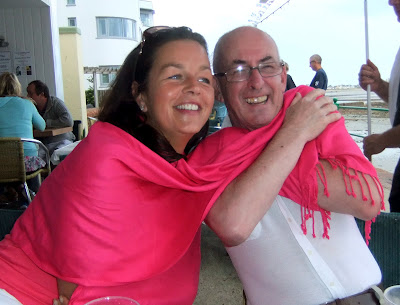 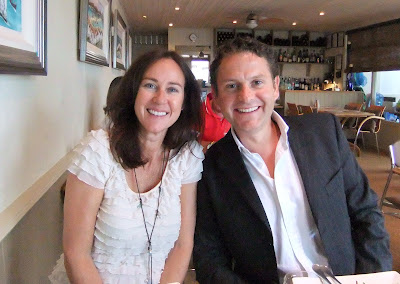 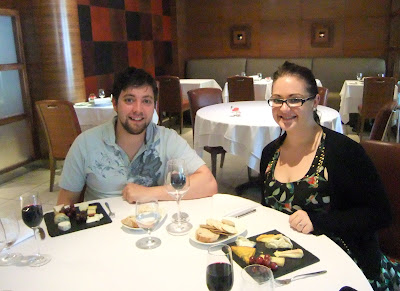 It wasn’t all roses and wineglasses, though. One night I came home from the Dockyard to find there had been a flash flood and my garden room was sodden. The carpet had to be ripped up, and I slept on my big luscious bed as if on an island in a comic strip sea. No, I wouldn’t shift (anyway the Bayview was, as usual, full), that room is my ‘home’. It has one fault though. You need two hands to open the door. And, coming home two nights later, bearing my Macbook and rather the worse for wear, I tried to open up with the computer under my arm. It went to fall, I grabbed it ... and I fell. Not a wise thing to do when you are on Clopidogrel. I bled. I bled so profusely that an ambulance had to be called (Thanks, guys!), and I am an un-picturesque Jackson Pollock of scars, bloody patches and red, blue and black bruises to this day. And then it was time to move on. Alex and Katy drove me to the ferry (7.45), I wobbled aboard (8.45) and headed straight for my cabin (169.00 stg!) and my slim bunk and as soon as the wretched tannoy announcements stopped, I slept. 6.30 arrival at Portsmouth, charming taxi driver (7 quid) to the Fast Wightlink Ferry (22.10 return) which set sail at 7.15. On to the cheerful little train at Ryde pierhead at 7.45 (3.90), off at Shanklin, half an hour later, small walk to South Wight Rentals to Pick up Red Fred the Suzuki Alto (480.00 the month) and – after a moment when I forgot how to drive – a careful wind out of the deserted (phew!) town, up to St Catherine’s Downs ... arriving at 9.10. Exactly 12 hours since the ferry had sailed. 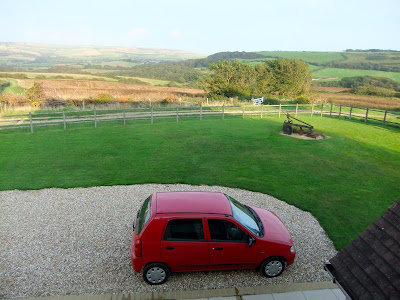 Hermitage Court Farm. Haven of peace and comfort. Jack and Charlie are two years taller, Jayne and Chris are five years younger, and the house has undergone major changes. It was super-comfy before .. but oh! my first-floor room .. no, suite .. is beautiful! I have a big bed and bedroom, a sitting room for writing, and a bathroom with a Cassius Clay shower. I’ll have more bruises if I’m not careful. And the view from my window, over the downs and out to sea .. 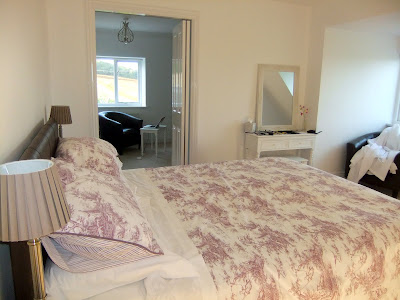 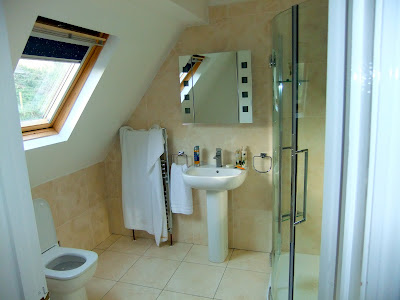 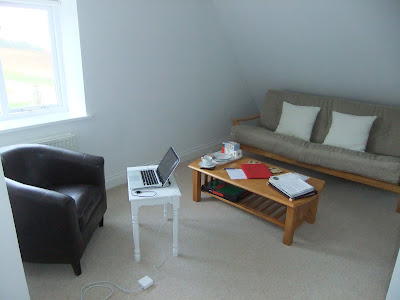 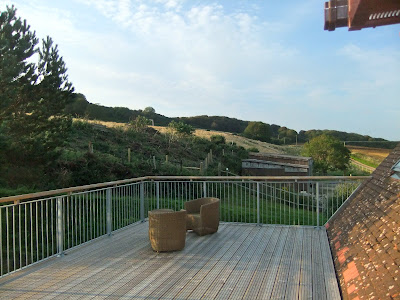 Well, this is my home for the next month. Probably the place where Vic Voc will hit its landmark 500 articles … All of which, more anon … I’m off the have a shower..
Posted by GEROLSTEIN at 3:22 AM

Stupid blogger have changed their format ... so no paragraphs, no gaps ... and I think soon no me ...

So great to have you back on the Island. Looking forward to catching ASAP.

Lovely to have you back after the horrors of last year. Can't wait to hit all the watering holes with you sweetie!
XXXX deb