.
After two days of much travelling, we decided on a smaller jaunt for the first almost sunny day of my time in Coalville: a trip to the zoo! It turned out, in the end, to be our most exercisey day of all: we strolled for two and a half hours amongst the animals (and the empty cages and food outlets) of Twycross Zoo, and I was so enrapt by the creatures that I didn’t even realise I’d left my stick in the small monkey house until ten minutes (and many monkeys) had passed.

I don’t often go to zoos. I’m not fond of animals in cages. But I have to say that the modern generation of ‘zoological parks’ is much more agreeably laid out than the old. I found that out when I visited the delightful Durrell establishment in Jersey a few years ago. Well, Twycross isn’t Durrell, it’s bigger for one thing, but it is built on some of the same lines. And it specialises in primates. A monkey museum. Which unfortunately means that bars and cages have to be well in evidence.

We did over an hour of monkeys. Don’t ask me to remember their names. I wouldn’t know my lemur from my colobus. I can recognise an orang outang, a chimp (thanks to Tetley teabags or was it PG tips?) and a gorilla (thanks to King Kong), but that’s about it. However, they are endearing animals, and you soon get your favourites. Here are mine. Apart from a little golden girl who was behind bars. The lovely ‘old’ feller with his dapper pointed white beard, the bored gorilla and the dazzling little lion monkey. I had to take a dozen snaps of him before he would pose prettily for me: we played chasings for ten minutes, and of course then I left him my walking stick! 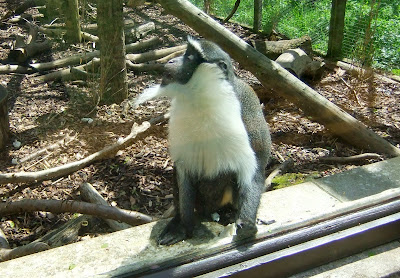 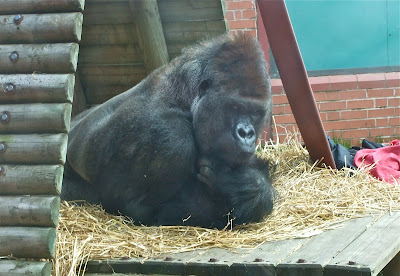 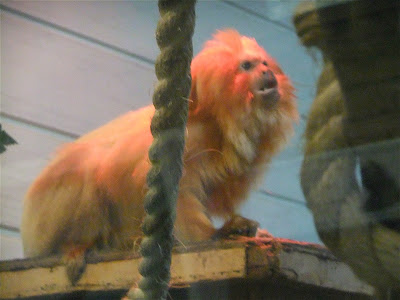 There are certain animals which no zoo aiming to attract the public can afford to be without and, in these post-Lion King days, top of the list comes – no, not the lions or the elephants (although four grumpy ones were sulking in a corner) – but the meerkat. Timon and Pumbaa have hoisted the wee animal to the top of nature’s hit parade. A shame they haven’t done the same for the warthog! 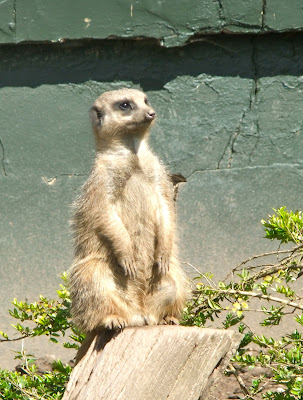 Lee Durrell told me that they are the juniors’ top favourite in her zoo, and today you could hear an infant squealing ‘meerkat’ at a display of prairie dogs, before being dragged excitedly to the real thing.

After an hour of primates, it was enjoyable to turn into the ‘open’ exhibits. The usual favourites – the vibrant pink flamingo, the ditsy penguins auditioning for Happy Feet, the sunbathing sea-otters – with the occasional interesting surprise. 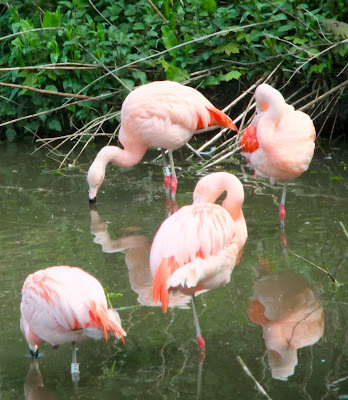 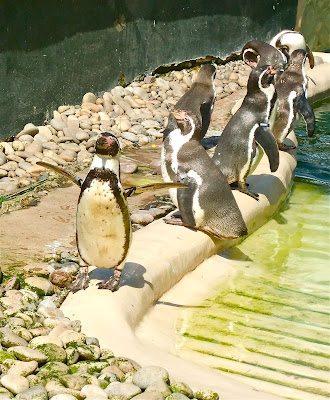 I particularly liked the Alice-in-Wonderlandish hornbills, and a pair of tiny tortoises .. 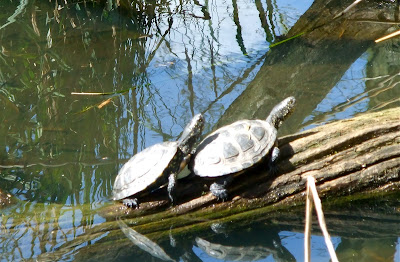 They looked so much more comfortable, natural and attractive than the pair of giant tortoises we had seen earlier. In fact, that comparison went equally for all the creatures. The big fellers looked bored, entrapped, unnatural, whilst their smaller counterparts made much happier visiting and viewing.

The big surprise was our very last creature: 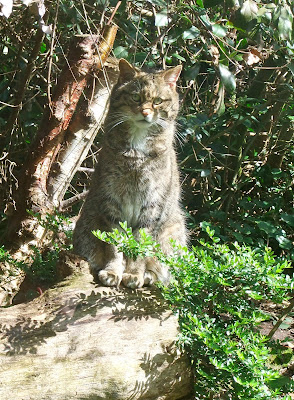 Yes, it looks just like my Minnie de Gerolstein! A little larger, a little more disdainful, but … what is a moggie doing in a zoo? Well, this chap is a special Scottish wild cat, it seems. So maybe Minnie, like me, has a bit of Scotch in her blood!

We couldn’t find our way to the bit labelled ‘Himalaya’. The signs led us to the umpteenth fast-food outlet and yet another children’s playground … one began to have the feeling that, like airports which resemble a shopping mall with incidental airplanes, we were in an amusement-foodpark with incidental animals. But we did find our way to the big new ‘Wetlands’ section. This consists of five or more obviously vastly expensive regulated pools filled with the same sort of reeds we had seen yesterday in Norfolk. I saw three common ducks dipping in one. And that was it. We were told that if you followed the walkway to its end there was a bird-hide, but after 2 ½ hours that wasn’t enough temptation for us. Well, I suppose this curious exhibition is some-rich-body’s heartfelt project: for me, it was boring.

Twycross Zoo clearly attracts many, many people. The car parking and the queue management facilities indicated that usually there are hugely more visitors than there were yesterday (whew!). I found it a bit curate’s eggy. Durrell gives a better appreciation of the world’s nature in a fraction of the space. But the best bits were lovely, and of course one has to remember, it is primarily a primate park. And hey! we spent a whole fast-gone two and a half hours there quite happily. For only 26 pounds (two senior citizen tickets ... and the girl didn’t even ask to see my card! Sob!).
Posted by GEROLSTEIN at 4:21 AM