Sing neigh, the wind and the rain ...

.
Summer has not quite happened yet.

Take Sunday. Sunday was Jersey Race Day. I had had a lovely day out, last time, at cliff-top Les Landes race-course, so my pal Charlotte (who is club secretary) organised a repeat. Her mum, Jennie, and Jennie’s lady friends – Prim and Rosemary --, a table in the big white marquee with a very good caterer’s luncheon, half a dozen races (and a couple of pony ones) … The only thing we hadn’t counted on was the weather. 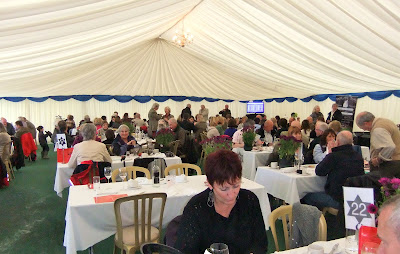 It rained. No, it poured. And the Manchian winds bit holes out of everyone’s umbrellas before unnaturally inverting them. Snuggled under Geoff’s windcheater (did I say, I left mine on the plane!) and Johnny’s teapot-cosy Turkish hat, I and my stick made it from the carpark, across the lush and soggy track to the tent …
Poor Charlotte, striding around in this blizzard in her long coat and woolly beanie, her hair looking as if she was out to understudy Anna Magnani as Medusa, organised drenchedly on. Abandon? not likely!
So we dined, and we warmed, and then Prim and I had the bright idea of popping out to see the hurdle race. 4 maiden hurdlers going round a big wandering mile track. Well, they all got round. I think the odds on favourite won by about 50 lengths in the end. And my snazzy cotton Rangiora pants didn’t dry out till morning. But, between brollies, I got my photo. Of the start.. 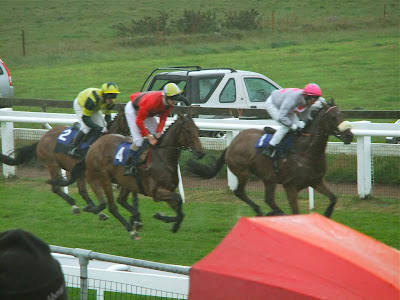 Racing here is delightfully ‘as it used to be’. There are a limited number of horses on the island, so they all race against each other regularly and you’ld expect there to be a hierarchy established. But no. One odds-on fave, which I saw win two years ago, got thrashed, two non-faves won by large margins … and a good time was had by all. All in the tent, that is. Outside, the public had melted away.

Memory of the day. As I was paying my bill, a damp lady came up to the till. She needed some money, she announced. Her horse had just won and she didn’t have cash to pay the jockey. I told her that in New Zealand, the powers that pay take it out of our winnings. She gave me a Margaret Rutherford look and exclaimed: ‘What a good idea!’

Well, I'll be back for the Derby, and for Ladies' Day ... and we'll hope the wind and rain stay away next time!
Posted by GEROLSTEIN at 3:15 AM