Summer is icumen in and all the jolly little barbecues are getting ready to sizzle. And I looked out at our poor, greasy, dirty old thing, entwined amongst several-year-old branches of wisteria (that’s how long its been there) and thought… ‘one day…’ 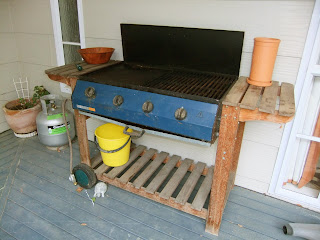 Then, on Friday morning, a rare event: some of that dreaded advertising stuff succeeded in getting past xtra’s usually efficient spam-blocker and on to my email. Mitre 10 Mega-hardware, down the road, had docked a rather better machine than I’d been vaguely considering by $50, just for the weekend. And it was a Masport: a reputed New Zealand brand whose logburner and lawnmower I already (reasonably) happily own.
So I went out and I brought one home. And if you think that’s the end of the story, I assure you it’s only the very beginning.
The next evening, we unpacked the three big boxes, carefully put all nuts and washers and suchlike safely into a big fruitbowl, and opened the assembly instructions. Immediate chaos. The text of the booklet seemed to bear very little relation to the pieces to hand. We didn’t have nearly enough washers, and there were several unidentified pieces, which we put to one side. But worse, much, much worse, were the verbal instructions. We’ve all read bad manuals: this one is the worst ever. Masport can in no way be a New Zealand firm. This nonsense is definitely translated by a mentally deficient non-English speaker from some Asiatic language. Or perhaps by an Internet auto-translating machine. It explains nothing, identifies nothing, describes things in a language I don’t recognise (do you know what phenolic means? I worked out nyloc, but how to recognise it?), it gives instructions in the wrong order, and instructions for impossible feats ..
Wendy and I opened a bottle of wine and settled down to beating the odds. We eventually got in the ‘two of plain legs’ and ‘two of axle legs’ (‘of’ incorrectly used it the manualist’s favourite word), though I alone wouldn’t have been able to, tried to guess what a ‘cylinder hook’ was and where it went (it didn’t seem to have a use anyway) and two hours and two bottles later, with bruised hands and scraped knuckles from trying to insert washers and nuts in places where only a midget’s hand could fit, we gave up for the night. Putting the handle on the hood was just too much. Why can’t they sell the damn’ hood with its handle ON?
I retired to my computer and tried to register the warranty for the Masport Misfit. It takes quite a while and it won’t accept your ‘form’ if you don’t fill in certain marked areas. One of these was ‘serial number’ (another was ‘phone number’, Masport is seriously unfriendly to we deaf folk who don’t have such things). I think Masport’s website must have been created by the same man who wrote the manual.
By 9pm, I felt like dismantling the wretched piece of machinery and dumping it on Mitre 10’s doorstep at midnight.
Instead, I howled off my frustration by e-mail to the Masport Customer Service department. And suddenly things began to improve. One by one, a young lady named Kim began to set things to right. I don’t know how many emails we’ve exchanged now, but each time we ‘speak’ another frustration vanishes. I won’t say the thing is, finally,100 percent assembled as it should be (and I hold the manual writer 100% responsible if it blows up at first lighting), but at least we have a barbecue… oh, and by the way, the Masport 4 model, guess what, DOESN’T HAVE A SERIAL NUMBER! 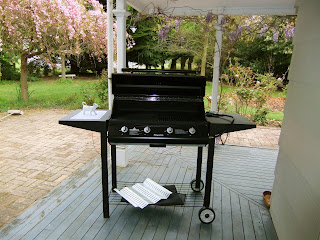 Masport needs seriously to get its act together. I won’t be buying another of its products until I am assured that it is a New Zealand firm, with New Zealand employees, manuals written by someone with at least a pass in School Cert English (and Engineering?) and a website set up by someone feeling and competent ... and while they are at it they should make Kim managing director. Or at least head of personnel or advertising. And get her to write the manual, too, as she obviously understands these things. Thanks, Kim.

PS The machine is scheduled to make its debut tomorrow night when a small slice of the Canterbury theatre world comes to visit .. If you read in the paper that half of New Zealand’s top talent was wiped out by an explosion at Sefton, you can blame the (?) Japanese author of the maddening Masport manual.
Posted by GEROLSTEIN at 1:37 PM