.
No, it’s not what you think. I’m talking horses. As usual.
It’s that time of year when those little bundles of long legs (and monstrous knees) that came into our lives 10-12 months ago take their first lessons in practical horseship.
Yesterday, Lucie and D’Arcy were hitched to the railings inside the crush, their warm coats removed, and…
A good springtime brushing such as they have never had before.. soft winter hair flying with every stroke of the brush, enough of it to stuff a large cushion! And, amazingly, neither protested.. 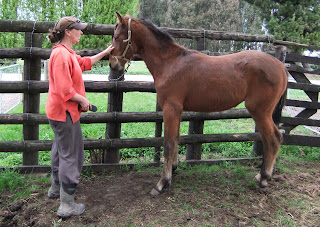 Every foal we’ve ever had from the ‘Robinson’ breed – from Duchess through Boris and Wanda to Fritzl and Seppl, has always protested.. but not these two! What a nice surprise!
Then, on to feet. They have to learn to let their feet be picked up so that they can be inspected and their hoofs tidied and trimmed. Once again, they were fine. D’Arcy’s trim was quite a long one, but he stayed calm and only tried a few times to nip Wendy’s back..
Lucie was a little less sure but still far better than average. Phew! 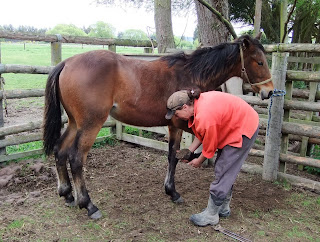 Next, the famous wormer. Most horses make a frightful fuss over taking wormers. Lucie’s mother was the worst: she’d put up a ten minute battle rather than take anything by mouth. These days she’s less neurotic, and its down to five minutes, but Lucie ... well, as of today she’s the wormer champion. Although, after having taken the stuff she wasn’t at all impressed with its flavour… 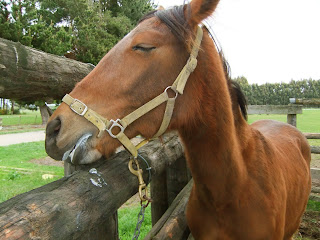 D’Arcy, in his turn, discovered that lead ropes aren’t only for leading, they have other attractions. Like, a substitute for chewing gum! Well, I suppose a boy has to have some bad habits.. 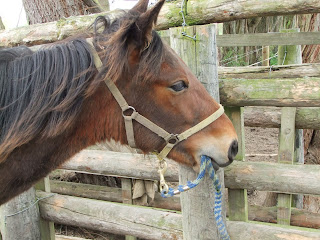 Lesson number one done, covers back on, and back to the paddock..
Rather more separate paddocks than before.
For D’Arcy has realised that he is male, and that Lucie (his niece, and anyway 2 months older than him!) is a Woman …