Four weeks already. Four weeks of New Zealand spring. An irrational mixture of cold, very cold, wet and occasionally fine and just very occasionally hot enough for me.
So a certain portion of those weeks has been spent indoor, wrapped in a shawl (yes!), playing with my Victorian Vocalists. But when it hasn’t been too freezing, I‘ve ventured out for a little gardening, a little horse-jogging, and the occasional bit of farm work. Nothing very exceptional, so all the events at Gerolstein, notably in the last 48 hours, have been on the horsey front.

First of all, my beloved Elena. Elena’s attitude to the pacing gait has been rather cavalier. Not a good thing when you are supposed to be going to be a racehorse. This week, she was put to the test. Pace, or else. So, yesterday afternoon Wendy took her out on to the track, and my once scatty Princess, cool as an ice-lolly, simply did everything that she should have. Phew! Next week, back to the beach for trial number two… 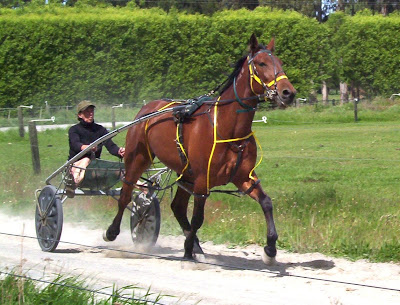 This morning, it was Barney’s turn. Three year-old Barney (aka McRubble) is another big, big young horse. Adorable if sometimes a bit goofy. He has already more or less coped with the beach, so he’s a step ahead of the year older Elena, and today was his first visit to the racetrack. His first sight of other horses, of running with them, of learning what racing’s all about. A baby’ first workout day can be a trauma: there are a hundred things that can go wrong.
Well, Barney – who wasn’t really ready for this -- got nearly all of them right. He got away safely if slowly, sat in third place (of five) on the rails, moved up to challenge the leader before the last turn, and was running on solidly if little fatly when he had a wee gallop with 200 metres to go. For a first try, not bad at all. Next week, Barney, we are a little less fat and we don’t gallop, OK? 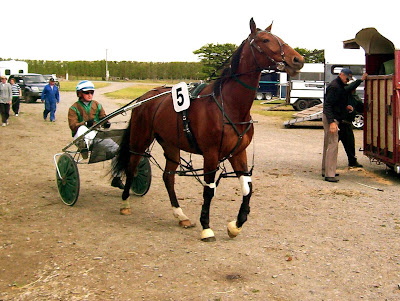 When we got home from the workouts, Duchess and Lucy were doing a war-dance down in the nursery paddock. Why? Because Gwen was standing guard over a sticky, leggy brown bundle. Duchess’s baby sister. Lucy’s infant aunt.
She has been instantly christened Dazie. Why? Because she has the biggest knees I have ever seen on a foal. Hands, knees, and ….
Lucy looked on fascinated (THAT’s my aunt?) as Dazie struggled to her feet and went for the milkman.. 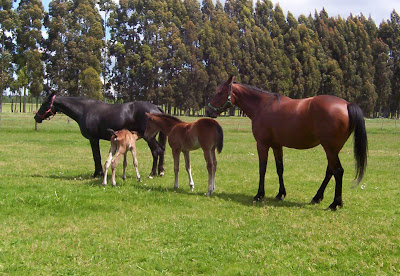 and it wasn’t long before our hours-old baby was up to putting on airs for the camera. 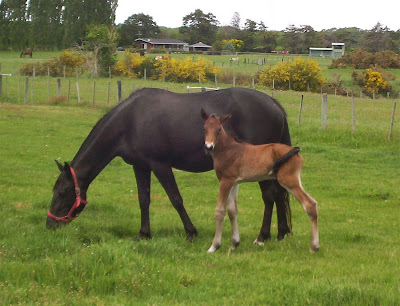 Of course, she hasn’t had as much practice as Lucy, who could and would not be left out of the photo shoot… 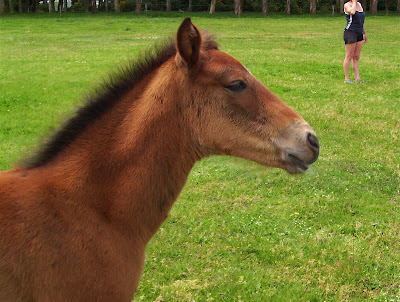