My Last Days in Paris 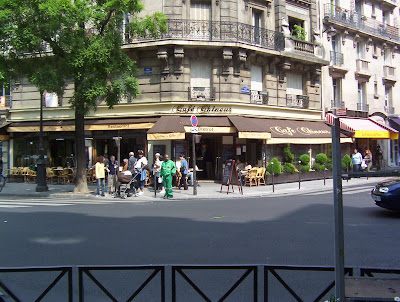 My last days in Paris?
For now, of course.
You’ll have guessed, I’m sure, that from now on this city is likely to be a fairly frequent feature in my life. If I can stand the pace.

Wednesday, I said goodbye to the Mayenne with the greatest misgivings and boarded the TGV back in the direction of the Gare Montparnasse and the Hotel Plaisance, Rue de Gergovie. And, needless to say, within hours, to the irreplaceable Café Chineur, Christophe and Pierre.

Christophe – and I’m sure no-one else could have done it – had, during my absence, bearded the ticket folk at the Gare du Nord and he has resuscitated my theoretically ‘invalid’ Eurostar return ticket! So, after all, I’m off to England on Monday at no extra expense.

We dined, en famille, at the Rue Alésia where Pierre had prepared a Breton dinner – a really superb piece of pickled pork accompanied by baked potatoes bursting with butter in the traditional Breton way. Bugger the blood-pressure, it was dé-lic-i-eux! The immediate price to pay, however was … political. For this was the night of the great TV presdiential-election debate between Monsieur du droit and Madame de la gauche, and twenty million Frenchmen (and women) were glued – for the first part of the show, anyway – to their oblong screens.

What did I think? Well, for all that it matters, I thought the whole thing a bit of a set-up job. Monsieur, apparently known for his fiery and trample-em-down style, had decided to be the soft and charming destroyer for the occasion. Madame, normally expected to be on the defensive, had clearly been advised to go in with all guns firing. And she did. To start with, she did it well, but during the course of the evening cracks started to show. She confused attack with rudeness … interrupting almost every time her opponent began to speak, and finally falling into what I’m sure was a trap and losing her cool. He, meanwhile, cruised along with perhaps – for me -- rather less éclat than might have been effective … but I suppose that the French people have seen him in many more dramatic flights over the years and such a display was not necessary.
Suffice it to say, that had I a vote, a vote for the hugely important post of President of the Republic of France, the figurehead (apart from anything else) of France for the rest of the world, there would be, without question, only one way to go. But I haven’t, and whichever way it goes (and, surprisingly to me, there does seem to be some doubt) I don’t suppose it will make any difference to me, so ….
Go for it, France.

I didn’t quite make it to the end. I shuffled off when they – finally – got on to the few minutes devoted to foreign policy, and sought the seclusion that the Hotel Plaisance grants…

Thursday went, to begin with, a little more quietly. My wi-fi session at the Café, a pleasant and super-light Japanese luncheon, some 1920s French opérette music with Christophe, plus a little sortie in search of the one item on my ‘French musts’ list that I’d so far failed to turn up: les espadrilles.
I popped into Monoprix (a lowish-price general store). No espadrilles. Out of season, it seems. But I – who for reasons of suitcase have staunchly refused to buy anything en voyage – came out with two flyweight white shirts and two pairs of paperweight trousers. They will be perfect for the ship, and anyway I’m afraid that in spite of repeated washing, the small wardrobe which I have with me is getting kind of stained (horses, Berenice, grandstands etc) and shabby. That’s my excuse anyway. I hope it will all fit in to my valise and not break my back on my virtual ‘last leg’, Paris-Croydon.

In the evening we proceeded uptown to another Café, Le Cavalier Bleu, in the Beaubourg, right opposite the Centre Pompidou. When I remember how grotesque we all thought that building when it first went up .. well, it seems one can get used to anything. Today, I didn’t mind it at all. But there was a better sight nearby: just around the corner I spotted the Bistrot Beaubourg ... my tripe restaurant. In spite of the name, I hadn’t connected that it was ‘here’.
At the Cavalier Bleu we met up with my favourite Alsacien, Jean-Baptiste, with his colleague Isabelle, and with Olivier (theatre director) and Fred (theatre designer), and spent a lively evening during which I managed mostly to hold my own in spite of a bass-n-guitar serenade which made hearing, especially for me, something of a contest. Drinks, supper, lots of chat – theatre at one end, business at the other, me in the middle – before we walked with Fred and Olivier through the chic shops of the quartier, taxi-wards. On the way, Christophe mentioned ‘espadrilles’ and in ten seconds Fred (who lives nearby) came up with .. a shopwindow simply bursting with the damned things! Only trouble is, given my morning’s purchases, I’m not sure I’ve left room in my baggage for anything else. But at least now I know that they exist … within walking distance of the tripe restaurant!

Friday should have been easy. But I have to face it: it seems I have tried to go a little too fast a little too often … two months into the first part of this ‘grand voyage’, I fear I am weakening somewhat.

We lunched at the cous-cous place opposite, along with Franck Cassard, a well-known French vocalist (everything from operatic primo tenore to revue in a Mother Superior habit), actor and all-round homme du theatre and de la musique. Free-flowing, voluble, amusing, interesting… I mean when did I last meet anyone who has actually played in Fra Diavolo, Jean de Paris, Ba-ta-clan, M Choufleuri and the like? Alas, I really had to work to keep up. It’s not the French. Mostly, apart from the exceptionally literary and the specialist slangy, I’m right in there. It’s my damned ears. If someone is speaking directly to me, one to one, that’s fine. But if it’s a case, as today, of said person entertaining a tableful of folk, even without background muzak mulching up the sound, I miss a bit here and there – a bit that’s been volleyed out in a different direction -- and then I have to hurry to catch up, and the whole thing becomes a frantic catch-as-catch-can. Well, its not going to get better, is it, so I’m going to have to learn to live with it. Which probably condemns me to a life without jolly times with ‘les gens du théâtre’.

After lunch I crept up to room number 5 and spent three hours on my bed. There’s no getting away from it, for one reason or another, I am just plain weary.

OK. I fell down a hole. I had a fit of the blues. Whatever. I suppose it’s surprising it hasn’t happened before. But I bounced back, and spent a delightful, not too long evening with Chris and Pierre in a friendly corner of the Chineur restaurant (as opposed to its bar), with a yummy mixture of fishy things – from smoked salmon to lumpfish – served with blinis and rather too much lettuce, some nice white wine, and – as a treat – a little whisky as a goodnighter.

Oh. One more and final thing I did today, which has imperatively to be related. With my breakfast I took Paris-Turf, the famous French racing newspaper, and therein I saw exactly what is in store for me tomorrow: just about the best and biggest day of high-class French harness racing imaginable!
So, if I unfortunately collided, in my last days in Paris, with that exhausting saga called the election, I do have my reward. And my next bulletin will be dateline .. Vincennes.
Posted by GEROLSTEIN at 11:42 PM