The President of France hving been elected 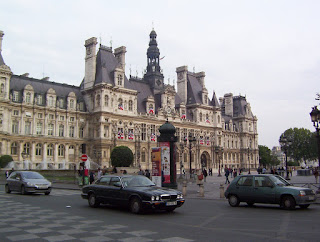 I have moved on to England.

Christophe, Pierre, Berenice and I spent the evening of Election Day with Olivier and Fred, at their apartment in the Beaubourg area – imagine, an apartment with a view of … the Pompidou Centre! That’s kind of classy, don’t you think?

Anyway, there we foregathered, as the evening closed in and the voting offices closed, along with Jean-Marc, with Clark, and with Martine, for a gently convivial evening centred, of course, around a television set from which boomed several versions of the events of the day and night, plus an endless stream of – of course – talking heads of French politicians. Most of whom, bar the infernal and inevitable Tapie, meant little to me.

However, the evening was placed under a slightly unfortunate star. Of the six Frenchmen (Clark is American, but only just) and one Frenchwoman present -- and I omit for the present the New Zealander, five plus one were possessed of political convictions ranging from the crimson to the scarlet to the very pink indeed. And it had been very obvious, for some time before our foregathering, that Nicolas Sarkozy, the decidedly conservative candidate of the right, was going to win this election by what in racing we would call ‘a distance’.
So five plus one people out of eight started the evening in a rather less than joyfully equi-animate state of mind. No-one actually seemed disposed to look at the situation with head rather than heart, and this resulted in rather a lot of sometimes witty and sometimes bitchy bon (and not so bon) mots being flung at those various functionaries of the victorious blue persuasion who passed endlessly across the screen.
I say that ‘no-one’ seemed disposed, but that is not fair. The one Frenchman present who had indeed backed the winner, and backed him most enthusiastically, was our Pierre. Now, Pierre is a highly intelligent man. And not only intelligent but cogent of argument and logical and persuasive of discourse. He also had the wind of victory in his sails. And he had also shared a bottle of white wine with me at lunchtime, and I suspect a least a bit of another on his own while I was having my pre-election siesta. Well, as he said, ‘why not? it isn’t every day that you back a presidential winner!’
Now I, who of course am politically as royal blue as Pierre if not even perhaps more so, saw very clearly that tonight was undoubtedly a night to keep my mouth shut. To make nice, conciliatory rose pink comments. And if necessary even to play ‘je ne comprends pas’ (and some of the rougher bons mots I actually didn’t). But Pierre wasn’t of the same opinion … and not inclined to play that sort of game. So ……..

Although we were not far from the centre of all the action, when we emerged at ten something pm in search of a taxi, the streets were surprisingly empty. It seemed as if all the stray Parsians who’d dared the streets that night had been gathered up to take part in the party in the Place de la Concorde that was so necessary for God TV and which had looked for a bit as if it wasn’t going to happen. (Well, when the result has been obvious for hours .. where’s the fun?)

So we got a taxi, and we got a merrily chatty driver with distinct political opinions (he mainly hated anything centrist!) whom Pierre proceeded to more or less demolish with well-lit political logic. Except that the taxi driver loved the dialectic, and bounced back with delightful ‘street logic’ of his own.

We ended this rather strange evening at – where else – Le Chineur. I had been on my best ‘boisson’ behaviour all night (necessary under the circumstances!) so treated myself to one of those millionaire whiskies in guise of celebration, after which we all trundled off to beds …

God’s in his heaven, and all’s right… all’s right with the wo-ooooo-rld! I quoted to myself.
Except that the morrow I had to traipse my bags across the English Channel…

And, after a fond farewell to France, that’s what – calmly and without incident -- I did.
Posted by GEROLSTEIN at 10:37 AM