It’s that time again. Inspired by the heroic heave-out of Rebecca Caine, and the pristine cleanliness, and lack of Stuff, in my new Yamba home, I decided on a(nother) Great Clean Out at Gerolstein.

Friend Greg came yesterday with his truck and a gallery of cartons, to take away hundreds of books and records to the Rotary Book Fair, and then I started on my a shelves of paper. Vast amounts of paper – largely research photocopies from the pre-Internet days -- to do with my old books, paper saved (why?) from Ian’s life and work which I didn’t send to the NSW State Library, and then paper from the boxes inherited from my Austrian forefathers … Documents, photographs, old letters, my poet brother’s pre-fame juvenilia and 1960s letters, my own plays, produced and unproduced (we all have those, yes?) …
Will all this Stuff mean anything to anyone once we are gone?

All this to preface to what will probably be a series of bloglets on What I Found and What Is It?

This was amongst my father’s papers. Along with some of his Tirolean photographs, a sketch of his father, some childish woodcuts, a pen-and-ink drawing of the Matterhorn (Schweizer Seite) by one Josef Probst… all personal items. But this? Why this? 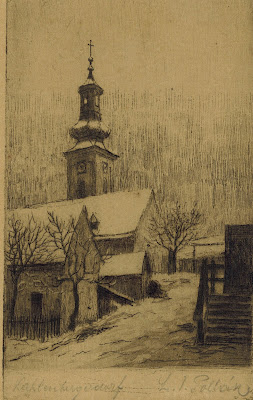 So I started looking. Where is Kahlenbergerdorf? Who was Herr Pollák? Well, Kahlenbergerdorf used to be a village north of Vienna, until it was swallowed by the metropolis and became Vienna Bezirk XIX. The 19th arrondissement. And not far away from the Stojetz family’s longtime stamping ground of Floridsdorf. 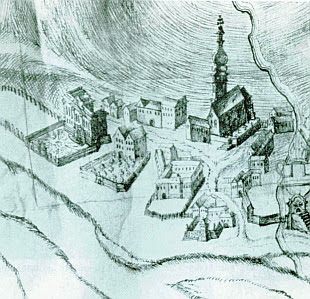 The town seems to have been a picturesque spot which attracted the odd artist. Including Schubert. It is also readily recognisable in pictures of all kinds by the curious green spire of its Parish Church of St George. 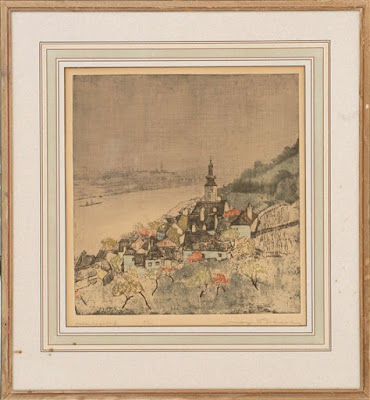 Kahlenbergerdorf. A place near to home where one could wander in the Vienna Woods and the mountains. Just the kind of place Dad would have enjoyed as a boy. But why this little picture? 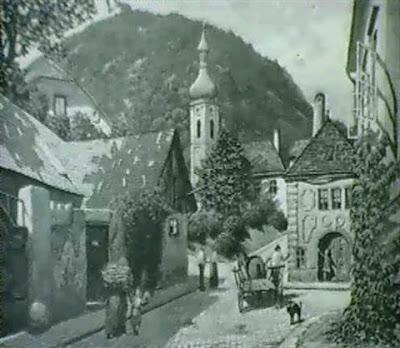 L V Pollák. An Hungarian Jew, clearly. Well, there was a Max Pollák, artist, engraving in the area in the early 20th century. But this looks older. And it is undeniably L. I suspect the V of being one of those honorific ‘von’s that Hungarians love to drop pseudo-aristocratically into the German versions of their names. So this looks like being Leopold Pollák (b Lodenitz, Bohemia 8 November 1806; d Rome October 1880). Painter and engraver. He seems to have done a tour of Austria and Germany and toured out ‘postcard’ engravings of picturesque places. Souveniry ‘snaps’ for the pre-photo age? He did a series, I see, of Beethoven’s homes … ‘A present from Stratford-on-Avon’?

So, my picture is clearly of no value. I wonder why Dad kept it close. A happy memory, perhaps? Well, I shall keep it too. I don’t know why…

Posted by GEROLSTEIN at 7:45 PM