Eating out in Berlin


Two days in town. Days when I didn’t feel much like eating. My stomach must have been left in the airbus. But by day three, signs of normality were returning, and since we’d eaten the cupboards pretty bare, why .. of course .. let’s find a restaurant.

On our little wander the previous day we’d spotted several, with an eastern or Italian air, but our closest local was just a couple of hundred metres away, in a street incomprehensibly called the Gartenstrasse. Couldn’t see anything like a garden anywhere. But, even stranger, the next street is the Bergstrasse, and there assuredly has never been a mountain here.

The restaurant, in the same vein, was named Alpenstück! But it specialised in Swabian and south Austrian dishes, so I suppose therein lies the reason!

We didn’t suppose we’d find pernod in Mitte, so we had our aperitif (imported – after much searching -- from Gesundbrunnen), with feet up, at home, and then we sallied forth into the crisp evening. Wouldn’t it be nice to find a ‘default’ restaurant right next to the apartment?

Well, I think we have.

Alpenstück is a freshly white and wood room. They have lovely linen napkins, but only some tables have cloths. We didn’t get one. Our table was plastic. The service is brisk and friendly. We booked for 6.30 pm, and arrived to find an almost empty room; but I noticed plenty ‘reserviert’ tickets on the clothed tables. Real? Oh, yes. Before we left, the joint was jumping merrily with a jolly clientele of all types. 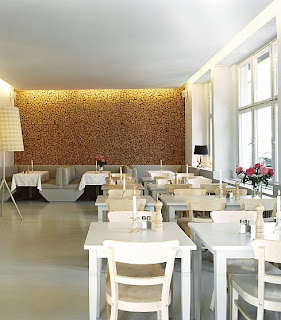 The menu is a very limited one (I hope it changes from time to time), but a very enjoyable one. We both started with schwäbische ravioli: a nice bit of veal in a soft pastry case, unfortunately (for me) accompanied by the eternal green salad which blights my eating out. Since it had a tasty sweet dressing I ate it. But I would rather have had some schwäbische green gemüse.
I got my gemüse in the second course, which modestly called itself a Kalbstafelspitz. It was the best bit of boiled meat I have eaten in years: falling to pieces, meltingy tasty, and served with little veggies boiled in broth. THIS is what I want to eat in Germany. Even if it’s theoretically Austrian. It was absolutely delicious.
Paulie had enough space for a gigantic Äpfelstrudel, not at all like Nana used to make, while I finished my vase of beer and pirouetted out on a wee schnapps.

PS I forgot to mention, how could I?, the staggeringly good home-baked bread. The same folk have a bakery just across the road. Look no further for the staff of life. Its by royal appointment to us!

Hello from Chris Weber. I hope you remember me from St Paul days, and my visit to NZ, fellow operetta fan.
We are spending time in Berlin too and would love to see you again. contact me at cweber0428@hotmail.com
Best to you.