.
Last night, on the Gold Coast (of Australia), a three year-old horse curiously named ‘Return of the King’ won a race in grand style. It was his fifth win, already.

He wouldn’t have won any, had it not been for me.

A few years ago, Gerolstein housed a broodmare – and once a fine racehorse -- by name Hot Blooded Woman. ‘Tui’, as she was known, didn’t have much luck with her babies. The first one died, the second one had a very modest career and got exported, the third one seemed to be doomed to run places only,,. and then in 2007 came Carlos.
We called him Carlos (tongue-in-cheek, of course), after the tenorino of the singing group Il Divo, because he was such a ridiculously handsome boy. 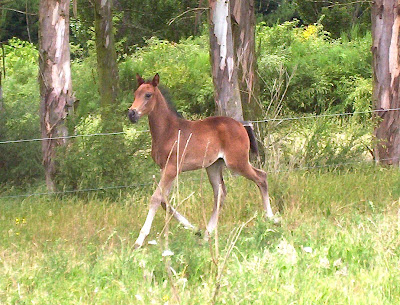 One rare night, Wendy had to go out, and she asked me to check occasionally on the mares and foals, while she was away. Part way through the evening, something jogged me into action, away from the comfort of the telly and my wineglass. I slipped on my espadrilles and headed for the baby paddock. And I hove over the horizon just in time to see Carlos take off. He’d got a fence between him and his mamma and all he knew to do, to get to her, was … bugger a perfectly good, wide open gate ... to jump it.

He’s a pacer, not a steeplechaser. He didn’t make it. His little trailing leg caught the top wires, he toppled over … and, oh my God, the wires closed in a tight tourniqet around his little hoof.

I flew towards him. He wasn’t struggling or crying out. Just whimpering and looking un-understanding. And upside down! With his little trapped leg in the air. I grabbed the wires to pull them apart and … zonk! The electric fences had leeched full-power into the top wires. But you don’t think of things like that. I just had to get our beautiful little boy free. Shock after shock sizzled through me as I fought to untwist the unyielding wires …

Well, I did it. And Carlos gambolled off with only the marks of the hot wires on his well-shaped leg. I sat on the ground, dazed, thinking ‘they say electric shocks are good for you’.

What caused me to go to the paddock at precisely that time? Ten minutes later, and … I hate to think.
But one thing is certain, Carlos wouldn’t be a racehorse.
So, every time Return of the King, as he was renamed, wins a race, I think of that night. The night of the twenty-three shocks…
Posted by GEROLSTEIN at 3:52 PM