.
Invalid. Yes, that’s me. And has been for a whole four months now.

Last year, at this time, I was swanning round Europe, reviewing opera in Berlin, Operette in Dresden, classical music in Jersey, restaurants (ah! the gallybagger soufflé and the Bay Grill) in the Isle of Wight ..
This year, a little light gardening, water-blasting and too much typing having proved injurious to my health, I have been scotched to my armchair in New Zealand occupying my passive, one-armed waking hours in ... reading? No. Even the long-awaited new ‘Robert Jordan’ has failed to rouse me. Not surprisingly: that magnificent series has utterly lost its steam and its heart. I have, unbelievably, abandoned it half read.

Surfing the web? Some of the time, yes. But there is a limit. I exhaust easily.

Watching television. Yes, I have been watching television. Is that so unusual? For me, yes, a bit. I didn’t own a TV set until I started spending serious time in my triplex in St Paul de Vence, in 1990. In London, we had a rented set for the office, but not for pleasure. French TV was occasionally nice. Good live sports coverage, full-length operas, concerts and plays. We switched on at least once a week.
My place in New Zealand was for years TV-free, until … I bought my first horse. I watched Davey Crockett running his first race on a neighbour’s set, but after a while we gave in, bought a machine, and installed it in the bach in the garden, for racedays. And (TVNZ being barely receivable at Rotoiti), I had to subscribe to ‘Sky’.
A decade on I still subscribe, though I’ve several times considered cancelling. Most recently, last week. I booked for ‘basic’ plus ‘sport’. I like sport. Real sport.
Sky TV and I, however, have different ideas about what is ‘real sport’. They seem to think its consists entirely of big boys (and occasionally big girls) playing with little balls. Kicking balls, throwing balls, hitting balls (and occasionally each other). Round balls, oval balls, golf balls. I am bored by ball games, and especially team ball games. Oval balls even more than round ones. I recognise that there are people – even intelligent people – who like them, so they must have their place. But programmed on EVERY sports channel at once, all day, every day? There is a rugby channel: why aren’t all varieties of oval ball games put on that, to leave the other sport channels free for cycling, athletics, skiing, swimming, rowing, triathlon, fencing … the sports I subscribed to see, and hardly ever do?
Today, I am not in cancelling mood, however. Today, at last, we had a rare treat. Two hours of world champs triathlon, the Roland Garros final (only a small ball) and, best of all, a live broadcast of my favourite cycle race, Le Dauphiné Libéré. OK, its at 1am, but that’s the world. So my subscription survives until the boys and their balls come back. Then, we’ll see.

‘Basic’ apparently comprises about thirty channels. And it is amazing how often those thirty are showing thirty programmes which no adult with an IQ over 20 (that’s me, you know) would want to watch. How many clones of clones of spinoffs of repeats of clones does someone think we can take?
But the Gerolsteiner telly still mostly – about 60-70pc of the time -- does what it was bought for. It shows racing. My TV ‘homepage’ is channel 35. Trackside. Now, I could go on at vast length about the pros and cons of Trackside (actually, I will) but, the fact is, we are lucky to have it. A channel (momentarily two) devoted to racing… or, at the very least, to betting and accessorily to racing – which shows every New Zealand race and many, though alas not all the best, Australian ones, is a gift to be grateful for to anyone in the sport.
Well, a critic is always a critic, and if I can’t review opera, theatre or food … I can always do my daily stint by reviewing television, so here goes. 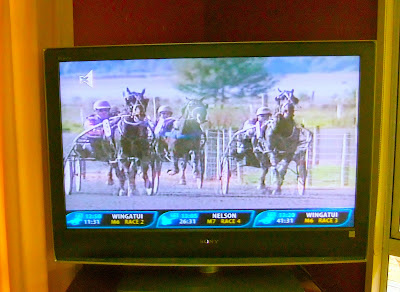 Trackside, love it and hate it.
Like a theatre show, a television channel has two parts: the play and the actors. The content of its programmes on one hand, and the people who present them and the manner in which they do so on the other.
The ‘content’ on Trackside, both during racing and in the race-less hours is good. I’d give it eight out of ten. I would be very happy if it showed just Australasian and maybe European horses -- no dog racing and no Asiatic racing (Sha Tin means turn-off in my language) -- but I can always turn off, or use the television set’s most valuable feature: the mute button. Of course, I don’t always turn on or unmute again, but since I don’t bet, the TAB doubtless couldn’t care less.
In the morning you have replays of the previous day’s races, so you can watch them without all the dreary chat in between, and you have excellent trials and workouts film. For the gamblers, there’s a longwinded talking heads (and some not very pretty heads! some folk should stick to radio) show previewing and tipping for the day’s events. It’s a healthy mix.
Once racing starts, its full on. Good filming, clear viewing, split screen when necessary, high technical expertise, clear incrustations (if sometimes too many), repeat views when the programming allows. I do object to the planners switching to a foreign dog race when there are a few minutes to go before or after an important horse race but, yes, the visuals are excellent.

The audio side ... commentators, link-men etc … well … there, there is more room for query. Here are a few of this listener’s disorganised thoughts.
Firstly, dear presenters, it is not necessary to talk ALL the time. Say what is relevant, then please stop. Even a beautiful voice gets boring when it is interminable. A less than beautiful one can cause insanity. Or somnolence. And, by the way, chitty-chatty between the presenters alienates the audience. Excludes them.
Secondly, spending time predicting the manner of the running of the race to come – inevitably wrongly -- is a bore. And an embarrassing hoot when replayed after the event. Stick, if you must, to tipping. Not crystal balls (round or oval).
Thirdly – banal interviews with trainers and drivers (the same ones, over and over) are hopelessly uninteresting. ‘Yeah, no, um, he’ll go good’ (the word is ‘well’ not ‘good’) may have several variations, but not many. Especially those predictable post-race ‘I’ve got a mobile microphone’ interviews with the returning driver (yeah, no, um, he went good).
Fourth: why read out loud every bit of text that can be seen on screen? Gabbling through lists of exotic returns, over forthcoming action, is just confusing. We can read. Most of us. If we are interested.
And, for me, the cardinal sin. Will whoever is commentating and linking PLEASE comment(ate) only what we can see -- only and exclusively the horses and the race that are on the screen -- and not chat about football, cricket, their friend’s babies, their first-name buddies in highish places or next week’s racing, as the mobile start goes into motion. There are hours of non-active time and programmes for that. We aren’t interested in the buddies, the ballgames and the babies. We are interested in the current racing action.

As for the cast of players… Well, Trackside evidently made a recent conscious decision. They outed all the ‘personality presenters’ of earlier years – Aiden, Sheldon, Michael, Justin – and replaced them with a blander breed. Fair enough. Faceless, unobtrusive link-men? Ideal. But it hasn’t quite turned out that way. Too many of the current blander breed seem to have got sudden (doomed) ambitions to be Personalities. No. We don’t need to see their faces on the screen, let’s have the horses; and, oy vay, I most particularly don’t want to see their hair. The HRNZ TV Comedy Prize for the past several years has gone without contest to the Trackside hairdresser. Oh, Lord! Who can forget Popplewell’s greasy porcupine .. ?

I could fill a page with grizzles and giggles, but enough. I just wonder who is the casting director for the channel. Well, it’s a professional interest. In my eight years in such a job, there were sound basic rules. Applicants must speak well, clearly, brightly, interestingly, in a comprehensible and unexaggerated accent, and with a sufficient but not intrusive personality. You know: a voice with more than three notes in it. But above all, they must speak CORRECTLY. No ‘he went good’ or ‘I could of done it’ or the host of other gauche grammatical clangers that litter Trackside-speech ... and is it too much to ask that the very simplest of French and German words be correctly pronounced? Australia does it, is education so bad in New Zealand? …
I know, there’s always the mute button. It is permanently in my hand. I can safely unmute when Jess and Karen are on (when the only two women on the channel are its best advertisement, why are there only two?) and Greg has got a new lease of life with his sexy new ‘older man’ haircut .... and today is rainy Nelson which brings out the best in everyone (but, oh, how I miss Ian Chambers and his wonderful commentaries in the fog!) …

Wait a minute. Today, Trackside is delicious! And I’ve sussed why. Perhaps the planes couldn’t get to Nelson, but we seemingly have NO talking heads! NO dreary interviews!. Just horses and races. Bingo!
Sigh. Trackside. Love it and hate it. Perfect or imperfect. Ungrammatical, ill-educated and with bad hair. It’s on in my living room now. Mute, for the 4 minutes till the fifth from Richmond Park where the sun is coming out. It’s true, we’re lucky to have it. We really are.
Posted by GEROLSTEIN at 7:54 PM