I said I wouldn't do it. I swore I wouldn't do it. More horses I simply don't need and I've already bought one in France and one in Australia this year. No more horses. Even when I saw that a full sister to my beloved Elena was up on the block at this year's PGG sales, I said .. wow, I wonder who will get her.. and I wasn't going to bid. I really wasn't.
Then, when I was engaged to go to speak to the students of the Performing Arts course at Christchurch Polytech (of which more anon) about My Fabulous Life and Career. on the very day of the auction, I thought 'well that's fate. I sha'n't even go to the sale'.
But...
I watched the first day of the sales on TV, and I watched beautiful, well-bred horses being knocked down for just a few thousand dollars. Oh, heaven, imagine if someone got Agnes (well, yes I had daydreamily given her a name) for five or ten grand... imagine what regrets I'd have. And how insulting to Elena!
I sipped a scotch. I devoured half a bottle of Aussie rouge, and finally I picked up the phone and called my friend Mike. "Going to the sales?" "OK, you can bid on lot 322 up to 10K for me."
I actually got back from my lecture in time for lot 322. The bidding was slow, and it got stuck at 5K. I had been right. 5k was me. But the auctioneer decided to spend an incommensurate amount of time on Agnes and finally someone proffered six. It almost seemed as if the sale was orchestrated to get to ten (the reserve maybe?). Mike was brisk and businesslike.. at 10 the mysterious 'opposition' (I should dearly like to know who it was) disappeared and ... Agnes was mine.
Inter-Island horse transport have a vast number of babes to transport here and there on sales day, but they got to us around 10pm .. and I finally got to see the horse I had bought. 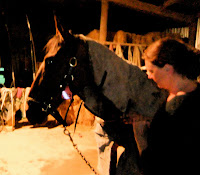 On the TV, in the ring, she looked like Elena all over again. Safely home, one can see the differences. She doesn't have the haughty eye, the snooty stare of her elder sister, she seems much less exaggerated in character (although it was exactly the haughtiness and exaggeration that made me go for Elena four years ago) and I think she's not going to be quite so huge and tall. Which would actually be good.
But 10pm was not the time to start investigating. Wendy huddled her up in a warm cover and neck rug, piled some hay into a nice big paddock ... next to Elena ... and we all went off to bed.
Naturally, first thing this morning I scurried out to look at my new girl properly. It's a typical NZ 2010 summer day, cool and drizzling, it had rained steadily through the night, making mud, puddles and soggy manes the order of the day. So I really couldn't give an exhaustive inspection to the slightly shy filly in the big blue coat. She has a nice head, a nice face .. for the rest, I shall have to wait till the sun comes out and she can strip off..
And, of course, till she recovers from what is called 'preparation' for the sales...

But she's mine. And she will, if such a thing is possible, be almost as much loved as Elena...
Welcome to Gerolstein, Agnes. 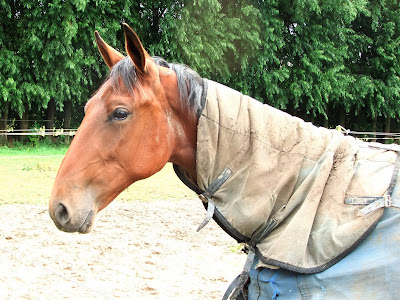 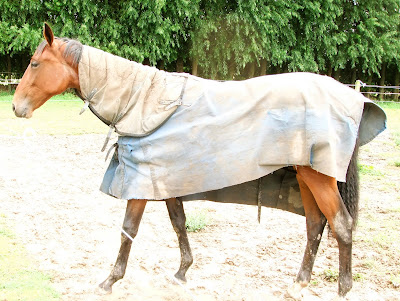 Posted by GEROLSTEIN at 1:28 PM

incroyable! thought we had weaned you off les ambleurs...

funny kurt, loved your walkjuere review even though the anglo-vision cannot be denied...!!! geerd