A sort of summer has descended on Canterbury. We have sunny days with frigid mornings, and regular rafales of rain. Not at all what I remember as summer from my childhood. Especially in December.
December is school holidays, of course, and so little D’Arcy came home from Motukarara this week, the first stage of his education complete, and looking ever such a big lad ... if a little tubby. Tuck-shop-itis? 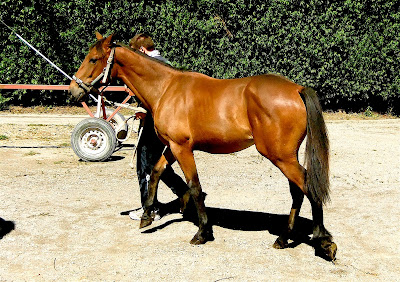 But Murray’s float did not return to Bank’s Peninsula empty. Mademoiselle Lucie is taking her uncle’s place in that nice, cosy box chez Edmonds.
I have to say we were not optimistic. Lucie has not grown out of her shyness and diffidence, and the idea of loading her into a horsebox … I think Boris (another uncle) holds the Gerolstein record at just under an hour of efforts, and we were prepared for that record to be broken. So imagine our surprise when a completely uncomprehending Lucie, without a backward look or a backward step, allowed herself to be gently encouraged up the fearsome ramp, into that dark, confined exterior, at the first attempt! 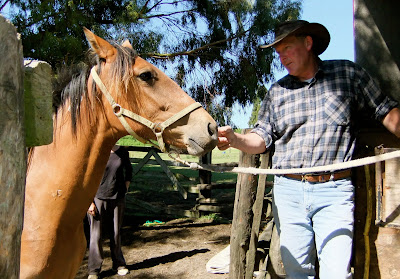 Elena has been to the races again. She continues to improve as she gets the gist of what racing about, and she is thoroughly game .. a real trier. This time, after getting rather mucked about at the start, she bullocked round three wide to sit parked – the favourite, in the lead, had no intention of letting her past -- but had to yeild that place to a gross outsider (which subsequently stopped). A bit of nifty driving and luck saw her slip into the trail on the home turn, and she ran on stoutly down the straight behind a leader-winner which was already gone. She finished fifth, showing every sign that with a little more luck and a nice draw she can soon be expected to do better. I should not neglect to say that the race was run in a downpour, and that far too shortly before the race it was announced that horses would be expected to wear mudguards and wet-weather dust sheets. Ours were at home. Robbie and Carla Holmes came to the rescue and Elena (who got thoroughly agitated at the delay and the remake of her cart) repaid them by beating their horse! Racing!
There is plenty of it at this time of the year, so the girl will be out again on New Year’s Eve.

Otherwise, we can hopefully take a small breather. All the Works – from bathroom and bedroom to re-roofing, to haymaking, to pine-topping, to fencing, to track-refurbishing and to drive-repairing are effectively done for the year (next year, I hasten to add!). As dawn breaks over our fields, Gerolstein can be seen to be pristine, and now we can sit back and enjoy it. 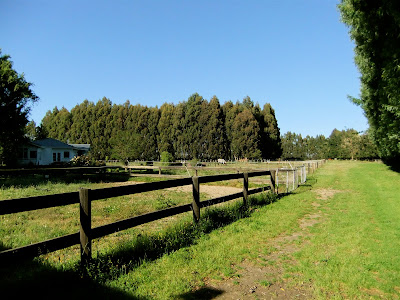 Except that I am off early January to visit mother in Nelson, then mid-January to see Barry and Rosie in Sydney, and finally 4 April it’s back to Europe… to Berlin, Jersey, my beloved Wight and to Paris for the northern summer ..

The year goes too quickly.
Posted by GEROLSTEIN at 11:50 AM