Kurt Gänzl, roving reporter, here. And this week I’ve roved to the rolling, hyper-green fields of the Mayenne district of France, somewhere, a good hour and a half’s comfortable train journey, out to the west of Paris.

I’ve come here as the guest of Jack Dowie and Hilary Claire, objectives: rest and recreation after the high life of Paris, good food, good wine, and a good dollop of horse.

Today, I had my first experience of French provincial racing, at the town of Argentan in the Calvados. Argentan itself (or the bits of it that I saw) might not be a tourist’s dream, but the racetrack itself is delightful. A gloriously green oval – like Enghien, set up to serve both harness racing and steeplechasing -- with charming countryside as a backdrop. Again like Enghien, the racecourse at Argentan is organised first and foremost for the horses and horsemen. By far the best buildings on the course are the series of hangars and boxes which receive the horses. The stand itself, seemingly built in several stages, reminded me a bit of Hutt Park 1990.
The sand track is quite big – 1325 metres round – but of unusual proportions: the straights are very long, and the corners extremely tight. But I guess French horses and drivers are used this combination, as very few horses galloped on the turns.
Once again, I’d accidentally turned up on big race day: the running of the 1-mile Criterium de Vitesse de la Basse-Normandie. A glance at the field’s form showed a lot of 0s and Ds (disqualified), but a look at the ‘money won’ showed that every horse in the race had 500,000 euros in the bank, and a couple had pocketed a million. It was one of these latter, a palomino named Lady d’Auvrecy, who shot from draw 7 to the front, and she nearly held on, being run down only in the last strides by 49-1 outside Laura d’Amour which, in spite of the pace at which the race was run, a 1.58 mile rate on a wet track, finished down the outside with gulp-making acceleration. 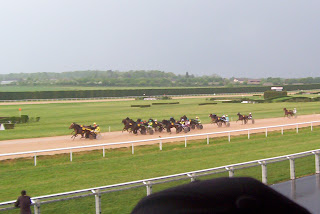 Argentan being ‘country’, not all the races were of the same level – although nearly all sported 18-horse fields, with considerable numbers having been denied a run! - and some were virtual maiden races. I say ‘virtual’, because they don’t have actual maiden races here. The system is one that I’ve been trying to get New Zealanders to listen to since forever. All fields are made up on the basis of ‘money won’. Between 10,000-20,000 euros, for example. So there are no ‘professional runners up’, managing to just get beaten to avoid promotion to a higher class. You win your prize-money, and its down against your name permanently. A rather effective pulling-preventer?
Anyway, some of today’s races were made up of umm ‘less-experienced’ horses and the starting methods – both mobile and stand - were put to test. One race had to be started three times, and in another one horse delayed the start by turning away, and then by tipping its driver out. And, after all that, it galloped and got disqualified. But at the end of the race the dreaded speakers doomed forth and driver Pointeau (no monsieur!) was summoned before the stewards. I fear for him. I am sure they had the black cap on.
The day included the usual monté –once again, truly exciting – and the final race of the day, which took place just as the skies which had been deposing intermittent rain on us and the track all day, opened up in full diapason, was an amateur drivers race. With both stake money and betting. Not to mention with fifteen starters of a fair (winners of over 65,000 euros) level. One or two of the drivers seemed to be suffering stretched-arm syndrome in the ‘fast’ section of the warm-up, but what was my surprise to see one ‘gentleman’ hooning his horse down the front straight, laying into it with a whip which went well over his shoulder. Like many amateur races, this one was colourful. Much action, some wild gallops, and finally a terrific finish in which the winner came from last to triumph in a three-horse finish where the drivers involved showed skills of a high degree.
(continued in next posting)
Posted by GEROLSTEIN at 3:50 AM