Yesterday, when I chanced upon that amazing Haymarket Theatre letter, with its character-assasination of old John Marks Jolly, I looked a little further down the listings and lighted on a few more fascinating old letters ..

This one caught my eye instantly, because, once again, it concerned music-making in Victorian days. 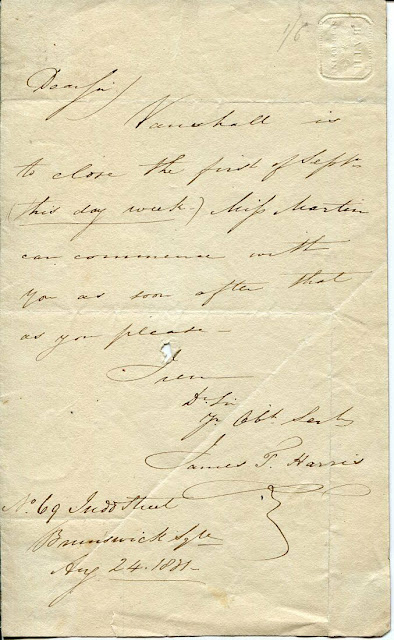 24 August 1821. Before the invention of the postage stamp. Sadly, there is no addressee. But I have managed to winkle a bit of history out of this little page.

"Miss Martin" -- presumably a vocalist, but there were a good few Miss Singing Martins -- is finishing an engagement at Vauxhall and is available for another ...

Firstly, it is not the celebrated Vauxhall Gardens in London at which Miss Martin is singing. It is the sort-of-equivalent in Bath, known better as the Sydney Gardens. At this stage in their existence of some 25 already years they offered mainly pretty promenades and Special Occasions. The names of the entertainers weren't generally publicised except on such occasions ... the illuminators got the billing!

But by the 1820s, the musical director Matthew Patton (1781-1854), the local Loder family were predominant as vocalists, with Mallinson providing the comic songs...  I can't see Miss Martin anywhere, but I guess she must have been there. And, for some reason, so must have been young Mr Harris. In the orchestra perhaps? Anyway, his letter is franked "Bath" (see top right corner).
I know rather more about John Thomas Harris than I do about Miss Martin. He was, in 1821, but twenty years old. He was born on 9 January 1801, son of one George Harris (1778-?1824) and his wife Elizabeth Lucy née Robbins (m 4 January 1795), and he comes to my attention on a playbill first in 1824 (3 March), playing the organ accompaniments in a rather ritzy concert series at the King's Theatre. Why? Well, it seems had got the job of chorus master at the Italian Opera! 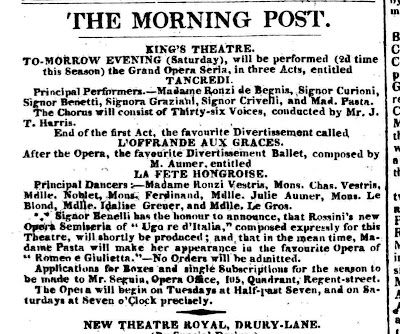 He had also got himself a wife, Miss Sarah née Lloyd (21 September 1823), who had started producing children at a prodigious rate: James Thomas (1824) and Sarah Elizabeth (1826) at 50 Strand, Isabella (1827), Fanny (1829) and Emily Carolina (1830) in their new home in Holborn, George Henry (1831), Maria (1833) and Ellen Lucy (1834) at the next home at the address in Judd Street, Brunswick Square which was already theirs in 1821 going by the letter!
In 1827, he is chorusmaster at the English Opera House, in 1828 he is fulfilling the same office at the Lenten concerts stage by Henry Bishop at Drury Lane and Covent Garden, and with William Hawes for Cosi fan tutte at the English Opera House. The opera was aletered and adapted by Hawes, which I guess is why Harris was needed. When John Braham had a Benefit (8 June 1829) and a barrage of famous vocalists joined to sing 'Tom Bowling' in nautical dresses on the deck of a scenic man o' war, Mr Harris accompanied them all on the organ. In 1831 he was again chorus master for Bishop at Covent Garden, in 1832 at Drury Lane .. whenever a chorus was involved at London's two principal English operatic theatres, Mr Harris was in charge. In 1836 he organised the choruses for Bochsa's grandiose concerts, and for the Royal Musical Festival in Westminster Abbey  ... I see him last doing The Messiah in March ...
On October 10 1836, he died. One line seems to have been his lot in the obituary department. He died at Judd Street, of unreported causes. Aged 35. 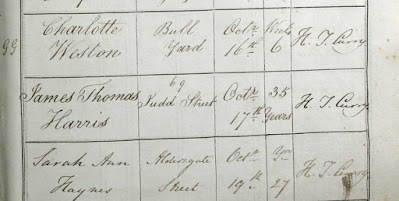 Three of his young children had already perished. In the 1851 census, Sarah 'annuitant' was caring for Isabella and Fanny 'professors of music', George 'solicitors clerk', 18 year-old Maria, and mother-in-law Elizabeth Lucy. What became of them all? All I know is that George gave up the law and took to making false teeth. He married, had children, and died in 1893. He had acted as executor for his youngest sister who had died, unmarried 27 December 1890. The rest ...? Go, see ...
As for Miss Martin ... maybe I'll bump into her one day ....
Letter number two is not theatrical. Its historical. A letter to wealthy Lancashire businessman ... of course, I didn't know he was a wealthy businessman when I squinted at this letter .. 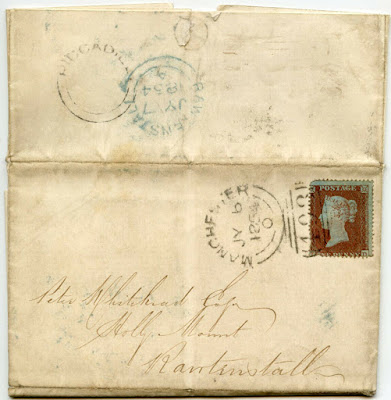 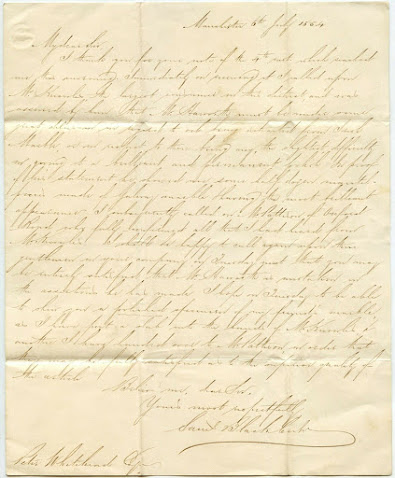 From Samuel Blacksquiggle of Manchester, clearly an agent or subordinate of some kind.
Mr Whitehead is apparently trying to secure marble for a highly-polished mantelpiece or mantelpieces, and Mr Blacksquiggle is assuring him that his friends Mr Knowles and Mr Pattison have the good stuff ...
Mr Whitehead, along with his brothers, Thomas and David, were large and important cotton millers. 'Holly Mount' a grand triplex mansion, housed the three and their families between 1835 and 1855, during their business partnership, at which time the brothers went each his own way in business (Peter built the Ilex Mill, extant today) but still shared a home. 'Holly Mount', sadly, has suffered the fate of so many Victorian buildings in the 21st century ... 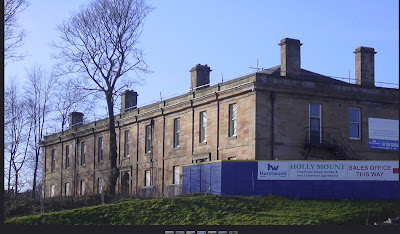 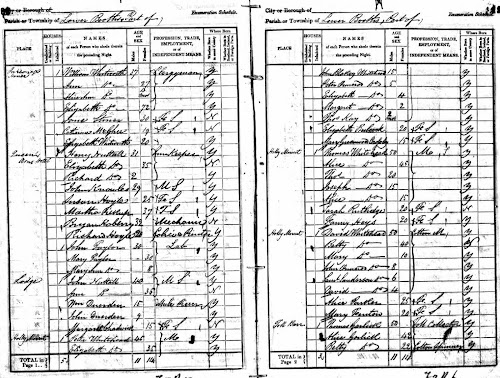 The family has been much written about, and thoroughly and meticulously investigated by a descendant, Peter Osbaldeston. I hurried to alert him about his ancestor's letter ... alas, he died some months ago.
Peter Whitehead died 10 October 1866, aged 78.
I wonder who Mr Blacksquiggle was. I shall chase him up. Also the marble merchants [John] Knowles and Pattison. Just for fun ... or maybe someone else would like to?
I'll go dig up another letter or three ...
PS the photo of Hollymount today is from the flickr page of Robert Wade.