William Ryalls, or the tenor "Tom Topsail" from Sheffield

Mr Ryalls was, for many years, the favourite tenor singer of the Lancashire and Yorkshire towns. It was admitted that he had his limits – in oratorio, in a large hall, he lacked the power to fill the hall – but the people of the midlands knew and know their voices, and they knew that Mr Ryalls was a concert singer par excellence.

William Ryalls was born in Sheffield, the son of one Jasper Ryalls (d December 1833), who was involved in the knife-making business, and his wife Mary (née Burgin, d 1873), and he himself worked as a cutler until he was in his thirties. 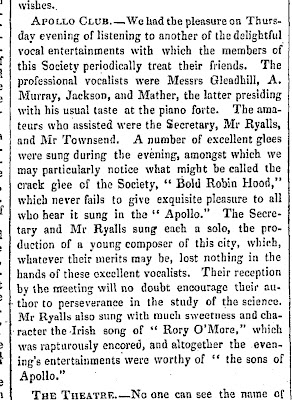 However, Mr Ryalls had discovered a fine tenor voice, and he became a popular amateur singer. I see him singing in Edinburgh in April 1836 to rave reviews in the Caledonian Mercury, at the Sheffield Choral concerts, in 1838, alongside Miss Sykes (not yet Mrs Sunderland) and Mrs Boocock from Southowram, singing ‘Sound an alarm’ and ‘Lord, Remember David’, and over the following years his version of local man John Knott’s ‘Tom Topsail’, ‘a decidedly superior display of pathetic ballad singing’, became familiar around the town and notably as the Cutler’s Feasts. On 7 February 1843 he gave a Farewell Concert … with Mrs Sunderland as support … and bade adieu to Sheffield. He was moving to Liverpool, and there, a few months later, he announced that he was giving up cutlery, and turning professional vocalist.

He was a quick success in Liverpool, and before the end of the year he was on the bills at the Liverpool Philharmonic Society. When he staged his own first concert, he put up a programme including the Misses Williams, violinist Blagrove and cellist Lindley, as well as local star Mary Whitnall. It was a London-style bill, and the Liverpool music press appreciated the lavishness of the new Liverpudlian. In 1844, he was seen from Liverpool and Manchester, via Wigan, Glasgow, the Isle of Man – frequently in the company of Miss Whitnall – and, on 2 November 1844, the two took part in the first of what would become the enduring series of Liverpool Saturday Evening Concerts. Nearly 20 years later, William Ryalls would make one of his last regular appearances at the same concerts.

‘He sings with great ease, not marring, as too many of our tenors do, the music entrusted to him by affectation …’ approved the press. ‘[He was] received with that rapturous applause which accompanies him wherever he appears’, ‘more successful than ever’, and, as soon as 1845, he was being described as ‘the most popular local vocalist of the day’.

He performed with the other top provincial vocalists – Mrs Sunderland, Misses Whitnall, Kenneth and Leach, the visiting Weisses or the young Mr J S Reeves – and from time to time with London folk. When pianist Mrs Beale imported Charlott Ann Birch for her concert (20 May 1845), Ryalls joined England’s star soprano in duet and unsurprisingly showed up as ‘somewhat nervous’. When Mary Ann Wood made one of her periodic sorties from retirement, Ryalls, Miss Whitnall and Sapio were her support singers. Madame Albertazzi visited Liverpool for his concert of 1846, Staudigl passed through in 1847, and Charlotte Dolby and John Parry also featured with the locals in concert. 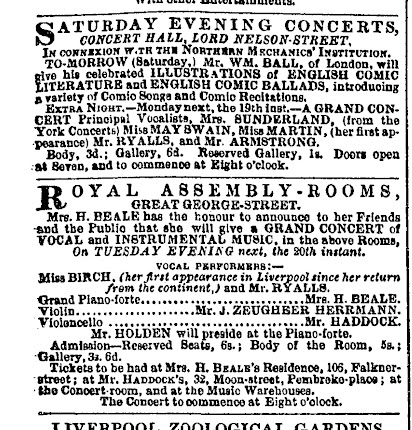 As did most provincial Victorian vocalists, Ryalls supplemented his performing by teaching, and among his first pupils to debut were two of his sisters, Ellen and Lizzy. They accompanied William to a number of concerts in 1851 and 1852. Lizzy married musician Henry Phillips Sorge in 1852, Ellen seemingly retired, after some fairly devastating notices, became Mrs John Porter in 1855 (30 July), and died at the age of 27.

Through the 1850s and into the 1860s, William Ryalls was the tenor of Lancashire and Yorkshire – with another Sheffield man, George Inkersall, coming from behind. Inkersall’s voice was more adapted to the oratorios which were somewhat out of Ryalls’ fach: although he ventured everything from The Messiah and The Creation to Samson, Jackson’s Isaiah, and the Lauda Sion in his time. But it was ‘Sally in our alley’, ’Norah the pride of Kildare’ and ‘Tom Topsail’ with which Ryalls won his audiences, and towards the end of his career the Liverpool press could affirm, when he appeared at his umpteenth Saturday Evening, that he was indeed a ‘great favourite… [he has] continued for many years to be the most favourite (sic) male vocalist at the principal popular concerts given in this town.’

In 1854, Ryalls mounted a performance of The Messiah in Liverpool with the unwieldy Belina Catherine Whitham as principal soprano. Days later, the pair of them filed an intention to marry document at Birkenhead. As far as I know, they didn’t marry. Miss Whitham briefly married a couple of other chaps before her early death, and Ryalls … well, he wed instead, in 1855 (13 September), a Scots lass named Jane Peacock Cork, from Edinburgh, with whom he lived for the last fifteen years of his life, and who bore him a vast family. In the 1911 census, she said she had had 12 children, 8 of whom were living. Yes, nine (minus four) sons and three daughters.

In 1861, Ryalls opened a music store at 9 Hamilton Street, Birkenhead, and he relocated with his burgeoning family to the area. He promoted concerts, ran his Birkenhead business, and produced children until his death in 1875. 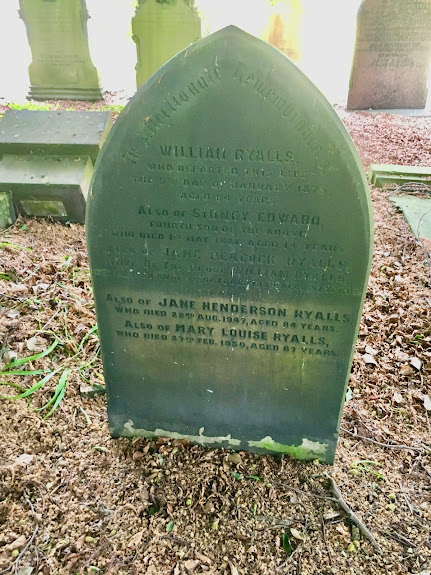 Jane continued to run the business, along with Lizzy’s husband Sorge, until she cried enough in 1879. Sorge promptly went bankrupt, abandoned Lizzy and their large brood, and fled via South Africa to Christchurch, New Zealand. ‘Signor Enrico Sorge’ arrived on the scene in 1882. For some reason, he moved on rather quickly -- he gave a Farewell Concert 11 May 1883 -- and I next spot him in San Francisco, amongst the other ex-English bankrupts and bigamists, playing piano for .. no!.. ‘Enrico Campobello’. Another phony Italian (Sorge was born in Windsor). ‘Enrico’ Sorge died in Ogden, Utah, about the middle of 1887. 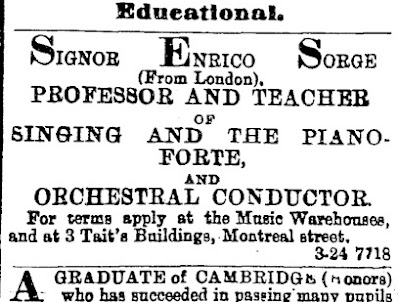 Jane survived until 9 October 1929, when she died at her home at 8 Reedville in Birkenhead. Eldest son, Henry John (b 12 December 1858; d 17 October 1949) took up the music-and-piano-selling business, with considerable success and not quite so many children.

Dear Kurt,
I am very interested where you got your information about Henry Phillips Sorge from. He is my great grandfather twice removed. I thought he had died in 1887 but can't find a death certificate for this. His father, Carmelo Sorge, came from Sicily, so that is why he said he was Italian.
Best wishes
Fiona Johnson

Hello Fiona
I wrote the RYALLS article a few years ago, so alas I don't remember the sources. I have 50 years of notes, otherwise I read contemporary newspapers mostly these days via the Internet. I guess Ogden, Utah is a little hard to research! K