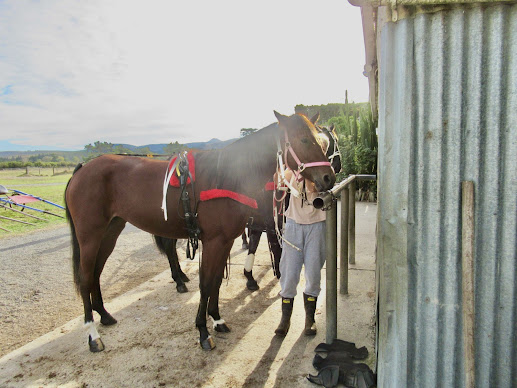 An early autumn morning, and Kelly Edmonds is harnessing her up for her Big Day. Her first trip to the workouts. No more tripping around joyfully in circles with good buddy Sam, today she is having her first try at being a racehorse. Nothing too hefty ... after all, she is only a little girl of two ... but a six-horse 'learners' trot at Motukarara, Bank's Peninsula.

So, what are we doing with another racehorse, five years down the track from my largely disseminated declaration of deserting a sport which had become a fairly crooked business, rotten as compost, poorly run ...

Well, things seem to have improved, slightly, in some aspects of the 'game', and, well ... I did miss it. And then, you see, Emily is family.

Her great grandmother, Gwen (Gee Whiz-Lady Robinson), was the first racemare I ever owned. She had her first start 4 January 2000 at Nelson ... 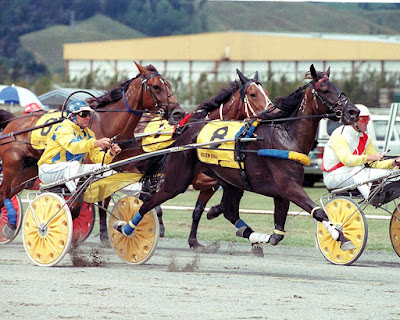 Gwen was a glamorous black lady, with impeccable breeding, but limited talent as a racehorse. She managed one win and a few placings in a much-photographed but short career, and was retired to stud. There, she gave birth to one crazy lady and two dubious babes, none of whom made it to the races, and then, sent to the unfashionable ministallion, Wrestle, produced the excellent Seppl who went on to win eight races on the two sides of the Tasman, Montmorensy who gathered three NZ wins and Great Fantasy, two. And poor D'Arcy de Gerolstein, one of NZ's earliest Love You colts, for whom we turned down a good offer and who collapsed and died on Richmond racetrack. 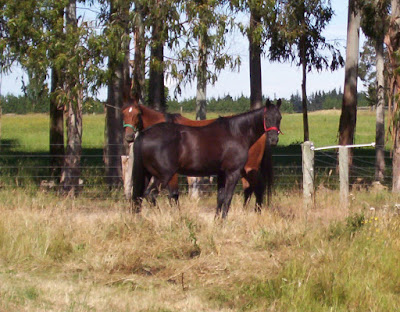 Gwen's first daughter, La Grande-Duchesse, joined her mama in the breeding barn after a public display of Unacceptable Behaviour in Motukarara carpark, and she in her turn produced seven babies, of whom one died, one became disabled, and the other five ... all won! Not frequently, in fact four of them, like grandma, won just one race, but two showed signs of great promise in short careers -- the splendid The Soldier Fritz, Jewels finalist and Group race placegetter, and the interesting Ruth Celeste Petite. The one who managed two wins, however, had a career of ups and downs through 22 starts...

Douchelette (she was born in a shower of rain) was a lovely baby ... but she was no longer mine. After Ian's death I disposed of my mares and set off round the world to recover and, on my mother's instructions, find a few partner. Huh! 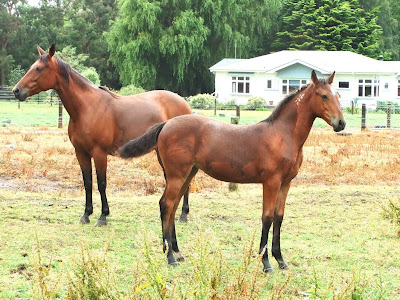 With both missions accomplished, and life looking more promiseful, I started watching a little racing again ...

And one day, up it came on some website ... for sale: Douchelette's yearling daughter. I'd never heard of the sire, Ultimate Count .. but who had heard of Wrestle when I bred Seppl?  I picked up the phone and called Murray Edmonds, my trotting trainer of forever. Would he go and have a look at her? Go? No need. She was already at his place. He'd gone to the stud to look at another horse and ...   Done! Wendy and I joined with Frank and John (who had been partners in Ruth Celeste Petite), and Emily was ours.

Emily? Named for my book EMILY SOLDENE and Paul's new CD based on the poems of Emily Dickinson. And a deliberate reaction against names like Imaflickinbuzzard and Divine Dentures.

I'm off to my Winter Palace by the sea in three days. I didn't expect to see little Em'ly on the track before then, but this morning, Wendy, 'Auntie' Faye and I turned up chez Edmonds (over an hour's drive away) at half-past nine ... 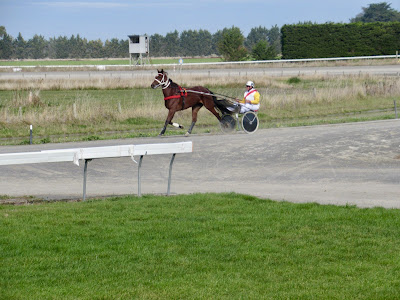 There's been a lot of Canterbury racing recently, so the workouts programme was small and our five co-runners were all three and four year-olds, so hardly what one would call 'learners'! All at least a year older than our little lass. But, as it turned out, a grand field for a 'tryout': nearly all of them trotted! Including wee Em! She gasped for two strides when the tapes flew back under her nose ('eeeek! what's THAT?') but was quickly into stride and chasing up the quick beginners .. 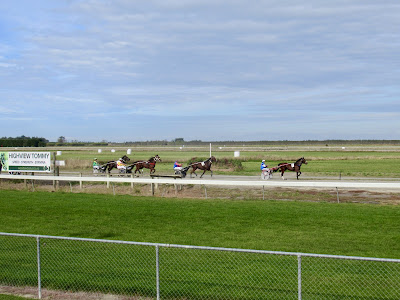 She sat in third place, while the 4 year-old (in blue) and the already qualified 3yo (red arms) led the dance .. 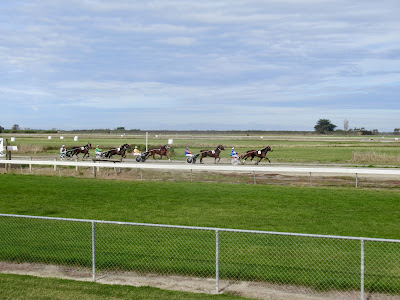 Round the turn, and she was still there, not far behind the leaders ... and we were smiling broadly ... then suddenly (Murray told us that he gave her a little whistle) she launched herself into a gap (yes!) on the rails .. well, it was damned close! But I saw her stick her little neck out and ... I'm sure she came 2nd, but workouts results are strange things. I don't think they went fast, but a good average speed. We don't know yet, because Mot doesn't put its results up till the day (or days) after ... but anyway, that wee button you can see, finishing on down the inside? That's Em'ly!!!!! 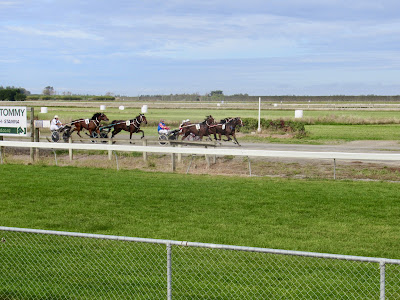 What a delightful morning. I remember how I always preferred the workouts and trials to the actual races. Faye snapped the happy owners (Wendy was videoing from the upper stand) 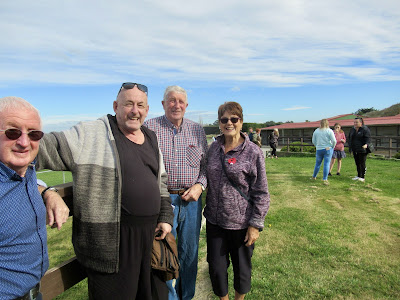 Well, Emily, a heart-warming beginning. I drove your great-grandma, attempted to train your grandma, gave birth to your mama in that shower of rain ...  I'm so glad you've come home! 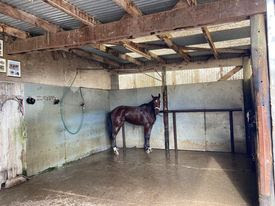 Post scriptum: Anna de Gerolstein, the 'disabled' filly has, at length, discovered her vocation. She is at Wai Eyre Farm, in foal to One Over Da Moon ... the family continues!

Yoho! And today at the track I met a darling old friend ... he too drove Gwen, two decades ago ... before digital cameras and things 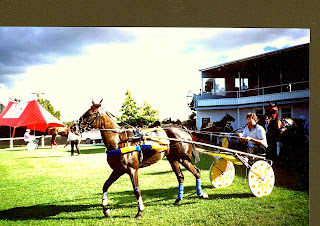 Posted by GEROLSTEIN at 9:51 PM

Super write up Kurt, you haven't lost your touch! All the best for Emily's racing career, I'll watch with great interest.