I have flown from Berlin, Germany, to Christchurch, New Zealand. It took me 42 hours from door to door. It was (with occasional remission) the worst piece of any kind of travel I have suffered – including pirates off Somalia -- in my entire life. And yet – with special reference to my aural ‘handicap’ -- we did everything that we could to ensure that things would go smoothly.

Hollow laugh. Start with, being a foreigner in Germany trying to book a return trip, Berlin-Christchurch-Berlin? Already you are in trouble.
The internet is flooded nowadays with people trying to sell you airtickets. The fact that some of those airtickets, or combinations of airtickets don’t exist or are impracticable doesn’t matter. The websites involved are also, it seems, responsible to no-one. Not you, nor the airlines whose tickets they sell.
Being a novice at all this, I sought the help of Uwe, who directed us towards a German firm named Opodo. Now Opodo may be all very well for Germans living in Germany wanting to travel round Germany. For a foreigner, they are a nightmare. Uwe and I found a sane flight, filled in the vast amount of detail required (most of it only so Opodo can subsequently send you unstoppable German-language junk mail), and entered my extra curly platinum debit card details. ‘Accepted’. All was well.
Until I got back to my flat, to find an email from the dreaded Opodo, changing its mind. ‘Not Accepted’. Posh platinum cards are not acceptable if they don’t have a German-address holder.
I try again. But the flights I had selected had now vanished, and I had to choose another set. Ah! Air New Zealand! And Air New Zealand all the way from Tegel to Christchurch! Perfect: I shall be able to check in – luggageless -- at Tegel for the whole flight, pick up my four boarding cards, and relax through the whole horrid affair. Booked. Using PGB’s German credit card. All was well.
No it wasn’t. Dining next evening with Kevin, I related my booking story, the horrors of Opodo and the Air NZ solution. ‘But Air NZ don’t fly from Tegel’. I fly to the computer, manage to find a customer service email for the airline and fire off my questions. ‘No’, they admit, they don’t fly from Tegel. I will be on British Midlands. I never fly British Midlands: they are late, unpleasant and unhelpful. I have been bamboozled. And as for check-in all the way through?: only if I turn up at British Midland three hours before the flight.
So, in spite of Kevin’s caveat that the desk wouldn’t be open three hours early, I did. Four hours, actually. 9am Friday. It was just as well that I did. There is no Air New Zealand desk at Tegel. Nor apparently is there a BMI one. It took me fifty minutes of asking every functionary in sight before I was finally directed to window B24, where Frln Khalid happily checked me in for the whole flight. Berlin-Heathrow-LA-Auckland-Christchurch. How come no-one told me about B24 before? 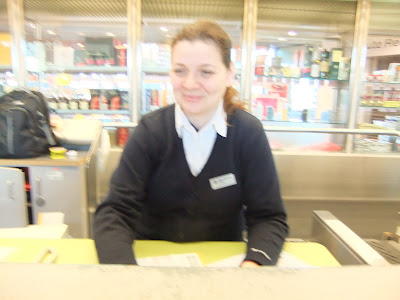 Much as I like Tegel airport, as an airport, it is not a place to spend three idle hours, so I took Kevin’s advice, checked through the first of the many security blocks I would encounter in the next two days, and found a nice bar serving nice cognac, which seemed just the thing for frazzled nerves at 10.30am. And I waited. And waited. This was BMI, you see. Masquerading as Air NZ, but BMI. So it was, of course, running late. My two hour ‘pad’ at Heathrow was disappearing. 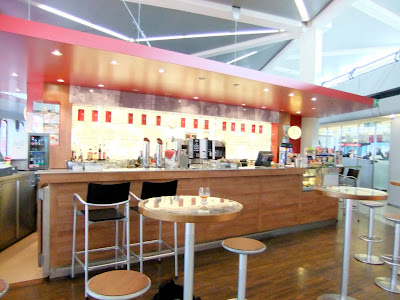 Well, by dint of running for fifteen minutes, and in spite of more security checks, I made it to the Air NZ Transfer desk, Heathrow, with ¾ hour to spare before take-off. All would be well. But it wasn’t. ‘You have your ETSA?’ asked the lady. My what? Some sort of new American visa that you have to have, nowadays, to change planes in the most hideous airport in the world. No, I didn’t. There was a machine on the counter where you could get this famous visa – for it’s a self-service on-line affair, how ridiculous! – but I was 1 minute 30 seconds too late. Why was I late? because their bloody stupid BMI-ANZ flight was late. And, no, Air New Zealand couldn’t help because – haha! – I had been so wicked as to book via an agent (an agent surely accredited by them?) who should of course have told me about ETSA, but if they didn’t it’s not their fault …
There was, however, another Air New Zealand flight going via Hong Kong later in the day. If there were space, they would shift me to that. Halleluia! But, no, it couldn’t be done now: I had to wait till the desk opened for the next shift … So I did. And I got Terry who, hurrah!, spoke clear distinct English, reorganised my tickets via Hong Kong for me, and promised to get the lady from the next shift (arggggh!) to phone Wendy and tell her of the changed arrangements. All was well.
And only five hours had been added to my journey. I spent those hours in the company of another large cognac, two pints of Guinness and an airport ham and cheese toasted sandwich with fat and soggy chips, served to me by a most attentive young man, and I plunged in search of oblivion into a fat Terry Pratchett.
The next leg was vaguely anguish-free. On a ‘full plane, no aisle seats available’ I had a delicious empty aisle seat alongside me, and with the help of imovane, I managed a couple of hours doze. But I worried: would Terry’s colleague get the message through to Wendy? So when we stopped at Hong Kong, I went to the Air New Zealand desk and (explaining my phone handicap) asked again if someone could ring or text. The girls at the Hong Kong desk were miraculous. The looked after me, shepherded me to the plane, as if I were 100pc deaf, and even arranged for me to be shifted to a nice seat up-front, with extra leg room,..
Disaster. Up front is baby row. Four babies. Three delightful. The fourth a hyperactive, grizzly, whingey, plain female child of two or three. Next to me. At about hour three I shrieked at it (in French) to stop kicking me, and its baleful mother took it temporarily on her knee. But then I had to cope with the curtain into business class. Every time an attendant whisked through, it walloped my trying-to-doze-off leg ... or even my face .. soon any chance of sleep had fled. And I’d finished the Pratchett. Calvary to Auckland.
I fled that plane with horror in my heart – I am booked to return the same way in April! - and headed for the Domestic Terminal. Straight to the Assistance desk. If Wendy hadn’t heard from Terry’s colleague or the Hong Kong brigade, she’d just about be at the airport wondering where I was. But one more try. The lass at the desk was a champion: made the call in my presence, and left a clear and precise message .. All was well.
How many times had I said that since I started this hideous marathon? Only to be proven every time wrong?
But, this time, all was well. In spite of the fact that I was sat, for my last leg home, alongside ... guess what! ... a 7-week old baby! (Is there a case for flights for pensioners only?).
Christchurch airport – still under messy reconstruction – Wendy arriving to find me the precise second I emerged .. and then we were on our way to Gerolstein. The nightmare was over.
So here I sit, still battling with my jetlag and thinking on what I have learned:
(1) Do not book international flights, with connections, on the internet
(2) Do not expect to be able to use even the flashest credit or debit card in Germany. It may (a) be refused or (b) involve you in vast percentage ‘fees’
(3) Do not travel to, through or anywhere near – not on any pretext -- the United States of America. (If I can change my return ticket I shall).
(4) Go by ship. I have already written to the shipping line.

PS Wendy’s phone registered several incomprehensible incoming calls, maybe from Heathrow and Hong Kong, but it was Shakira (?) in Auckland who saved the day. Thank you, Auckland.
Posted by GEROLSTEIN at 12:55 PM 1 comment: