.
I'm pouring a nice big gin with fresh-squeezed lime. And it's only 2.30pm. I deserve it. Today has been an unexpectedly successful double whammy day.

This morning, at 7am, I conquered in my battle with 'Kate Talby'. 7am is too early for gin, even for me. So, I dove instead into a plate of chicken breast, chorizo and lovely yellow eggs, and set myself another 'impossible' task, to start on, once my appointment with my tax accountant was done. I was heading back to the world of the Cartesian prima donna -- we've pinned down Ethel Pierson, Duglas Gordon, Ethel McAlpine, Pauline Rita, so now on to another flower of the species: Miss Esme Lee.

I've always rather 'liked' Esme Lee, as she toured for ages in the title-role of the sadly neglected but fondly loved (by me) Erminie, but I'd never before thought of investigating her. Esme? Hmmm. But I looked, and blow me down there she is in the 1881 census, touring in the title-role of Olivette, Esme Lee, aged 19. But, strangely, she didn't seem to exist before or after. Maybe she was glorifying in her first job, her new name, or maybe her landlady just did a bit of guessing. For she wasn't 19 (she was 25) and she wasn't an Esme or a Lee ... yes, here we go again.

But, first, the career. Briefly. Much of it was spent with the manager of this, her first show. Mr D'Oyly Carte. Over the fifteen years that followed she appeared as leading lady in what seems to have been the entire Gilbert and Sullivan canon in the British provinces, plus such pieces as The Vicar of Bray, Rip van Winkle, Haddon Hall or His Majesty, interspersed with lengthy stints in the title-roles of Olivette, Erminie, Nanon, Dorothy et al. Occasionally, she ventured into London where she appeared for Carl Rosa in Paul Jones (Malaguena), and for Carte as Lady Rowena (and cover to Esther Palliser) in Ivanhoe and Jeanette in La Basoche. A full and fine career of little but leading roles, in which she was ever praised for both her clear, attractive, well-trained soprano and her charming appearance and jeu. 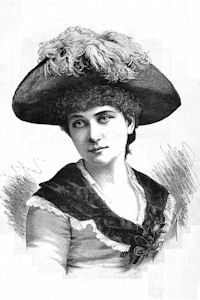 In 1887, she was touted as engaged to play Rose Maybud in Boston, but I don't think she did. Instead she went down to Brighton and got married. Her husband was named Robert Redford, and he was the general manager of Carte's touring companies. Robert Redford? I snorted! Another pseudonym to sort out. But it wasn't. And he had a brother who was a theatrical manager too: Hubert Arthur Oswald Redford of the Theatre Royal, Cheltenham. And others with even posher names. One became Examiner of Plays! Another seems to have become a Sir for services to the Scottish Post Office.

Anyway, with Hubert as my guide, everything unravelled. Robert was Robert Hamilton Burgoyne Redford (perleeease! daddy was a simple surgeon!), born Weymouth 1855, and married at Brighton 1887 to ... Grace Pallant. Hello, Esme!

So here we go:

Yes, the same Walter Pallant (d near Margate, 2 August 1904) who would become a wealthy stockbroker on the South African market, an amateur musician, bachelor buddy of 'Mons' Marius, chairman of the board at London's Gaiety Theatre, and a more or less acknowledged contributor to the libretto of the successful musical The Circus Girl.

To finish the story: in 1898, just as a decidedly good racehorse called 'Esme Lee' arrived on the British tracks, Redford became proprietor of the Theatre Royal, Cardiff. The family subsequently moved to Penarth, and Redford did well enough that he doubled by taking a 10-year lease on the Cheltenham Theatre, where brother Hubert was general manager. Both theatres appear to have prospered under his management, but Grace-Esme didn't last the distance. She died, in Wales, in 1910. Brother Hubert died 19 May 1924, and Robert, who retrenched to Penarth, not until 1936.

Sadly, some dumb actress then took on the name of 'Esme Lee' to play bits in a handful of London and touring plays. It couldn't be she, could it? She was dead.

And that is the tale of Esme Lee, her brothers, her husband, and whole fami-lee ...

I really didn't expect it would fall into place like that! But the odd 'Burgoyne' does help!