.
My surname has undergone a few fairly subtle changes on its way through the last centuries: Gánsl, Ganzl, Gänzl .. etc. But the Austro-Hungarian variants of the name all mean the same thing. A little goose. A small goose. Well, perhaps a Gosling sounds less daft.

So I was rather tickled to see this item on e-bay this morning. 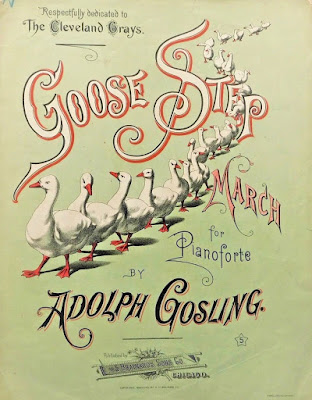 Adolf was the name my great-grandfather, Abráhám, went by, when he moved to Austria, and elided Gánsl into Ganzl.

Well, unsurprisingly to me, Herr Gosling doesn't turn up anywhere in the music papers of the turn of the century decades and doesn't seem to have written any more marches, so my first impression that this is a fake name, someone making a 'goose' joke, seemed bang on.

But, you know, you have to check. And do you know, there WAS an Adolph Gosling! Two actually. Father and son. There they are, living in New York, in 1860. Father is a German 'merchant' aged 30, from Osnabrück, mother Charlotte née Townsend is a native aged 35, then there are Carl (5) born Germany, Anna (3), born New York, and Adolph junior, aged 10 months and born in ... England? They have five servants, so Dadolph must have been a good merchant! And by 1865 he is the consul for Hannover in New York and a banker! Son Adolph is documented. Adolph Herman Lotha[i]r Gosling, so his death certificate says, was born in Liverpool, England 15 July 1859 (on his passport he says 1858) and died in Delaware, Pennsylvania of heart disease and bad indigestion on 3 July 1910. Wife: Fannie Taber née Moses (1884). All straightforward. No it isn't. There is, officially, no A H Lothar Gosling born in London at that time. There's an Adolphus Lowther Dove ... no, that is really too ornithological!

And, of course, none of that tells us whether this prominent gentleman, who in the 1900 census is simply listed as a 'salesman', had anything to do with this piece of 'ganslmusik' from Chicago, or whether the publishers were just playing silly geese. Nor, indeed what Mr Gosling's name was originally. Gössling? Or Gansl. Or Schmidt? Because Goslings don't seem to be very easy to find in Osnabrück.

PS My friend Betsy in the USA has unearthed two more pieces by our presumed Mr Gosling: a 'Golden Rod' (1885) and a 'Cotton Blossom', so it seems he was not just invented as a composer of waddle-music. Even if he has changed his 'ph' for an 'f'. 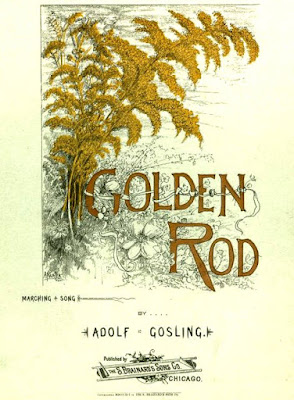 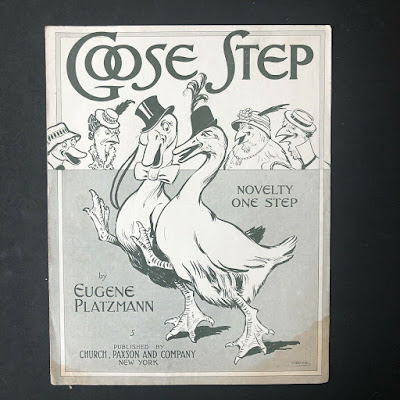 Posted by GEROLSTEIN at 8:14 PM