Angelina, or original cast photos from 1873

Earlier this week, my breakfast time ramble on ebay (new mysteries daily!) threw up three unlabelled, unidentified theatrical action photos from the 1870s. Fradelle and Marshall: photographers. So, thus from 1872-6 when that firm was active. Not ‘1880s’ as the caption said. Peer at the pictures … can I recognise anyone? I'm not very good at this ... but I think so! Ada Swanborough. 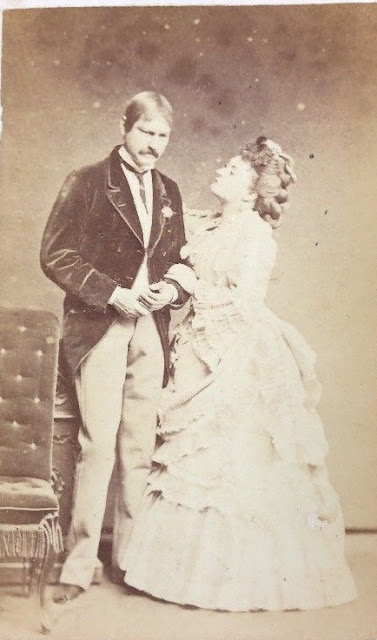 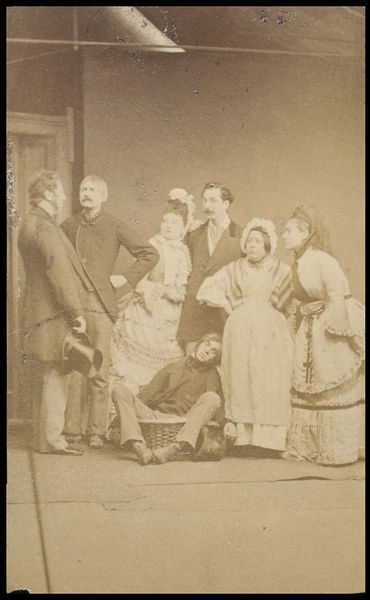 Short answer: the play Not Such a Fool as he Looks (that’s the one with Miss Swanborough) and the hit musical comedy Nemesis, later followed by Eldorado …  And yes, that’s what these are: original cast (posed) action photographs for the 1870s! Wow! So here (below) we have Edward Terry in the middle, as Calino in Nemesis, being restrained by Claude Marius in whiskers (Major), and flanked by Harry Cox [real name Oliver James BUSSLEY] (Potiphar, striped pants) as the fathers of Calino’s two wives, there’s Johnnie Wallace, and the two guardsmen are H J Turner and H Carter. A whole male era of the Strand Theatre in one photo. And in such an important show … one might even call it Britain’s first ‘musical comedy’. Like ground (re)breaking shows such as The Pink Lady, thirty odd years later, it was a musicalized Palais Royal farce (Les Deux Noces de M Boisjoli) with all that meant in skillful plotting, construction and dialogue. And the music? – a pilfered selection from the best of Paris’s latest opéras-bouffes. 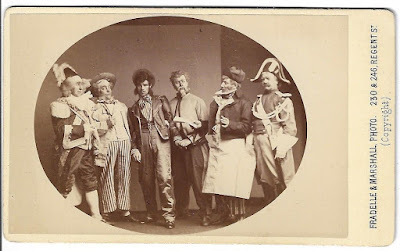 Having pinned down my show, I hurried to the V&A’s Guy Little Collection for confirmation and, yes! There was my photo and a whole lot of others from the same show. Including, this time, the ladies: Maria Jones, Sallie Turner, Topsy Venn and, as the two wives, Nellie Bromley and Angelina Claude. 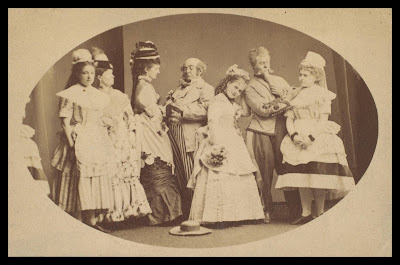 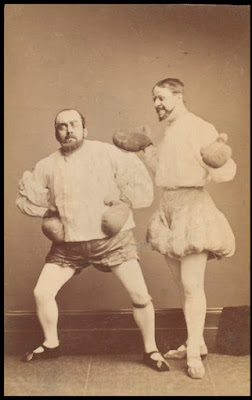 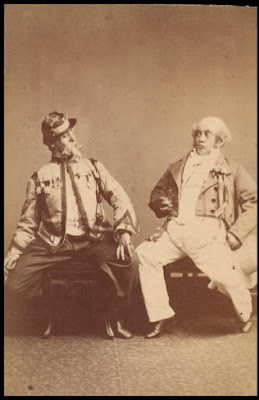 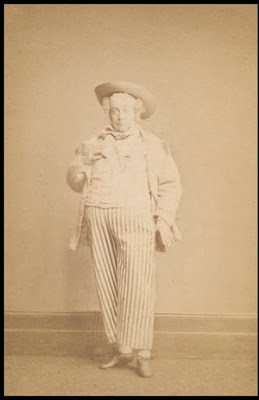 Angelina Claude. Obviously a pseudonym. And a conundrum. Who was this little lady who appeared from the depths of the provinces to star in Nemesis and its successors for a handful of years, with enormous success, and then vanished utterly from the theatrical world …? So, of course, I investigated. And the first thing I discovered was … it wasn’t a pseudonym! She was christened Angelina, like her mother, whose second husband was an unfortunate Monsieur Claude of New Orleans. The second thing I discovered was that I’d let myself in for a genealogical marathon. Angelina was a twig on a large theatrical family tree, which had to be investigated.

Angelina was born 26 March 1850 in Liverpool, and christened in Manchester, as her parents toured the midlands. Her father was Mr Henry Matthewman (1821-1856) actor, and more significantly, dancer and pantomimist; her mother ‘Mdlle Angelina’ (Angelina Matilda Treat) (1825-1876) was a dancer and Columbine. I see them as early as 1847 at York, then Whitehaven, Manchester, Leeds (training the local children for the theatre), Sheffield, Liverpool, Bradford, Dublin – where he played The Dumb Man of Manchester and the pair played the annual harlequinade. They were rising in the profession nicely, and decided on the big leap. America. There, too, Matthewman became quickly established. And suddenly, 25 April 1856, at the age of 34, he died. 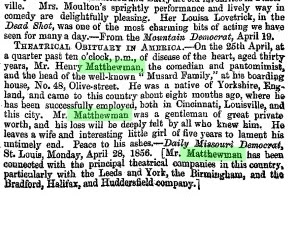 Angelina remarried in America -- Mr Camille Bernard Claude – and the ‘family’ stayed some five years in America before crossing back to Liverpool, where Angelina I put Angelina II on the stage and Mr Claude having repudiated her in the press and courts (‘failure to provide’) shacked up with a Miss Margaret McGregor whom he eventually, after having bred, wed. So, exit Mr Claude. And enter the ‘Wonderful American child actress, danseuse and vocalist' ‘La petite Ange Claude’. ‘Ange’ started iffily when mamma sued Alex Henderson at the Prince of Wales for breach of contract. Henderson was the town’s most important producer, so mamma had cut off her nose. But the child was good, and quickly found a berth at the local Adelphi Theatre and then the Amphitheatre playing protean roles and pantomime. Hop o’ my Thumb in 1862, Harlequin and the Child of Hale in 1863. In that year, the well-known Mrs R[obert] Power and her son, pantomimist Robert Power (‘of Drury Lane’) were playing the Liverpool Theatre Royal. In 1864 Angelina was engaged for Plymouth where the pantomime was Mother Goose. Angelina was Phoebus and Power was clown. Before the season was over, fourteen year-old Angelina was pregnant and the two young people were married (28 January 1865). Carlotta Louise Power was born back in Liverpool before the end of 1865. 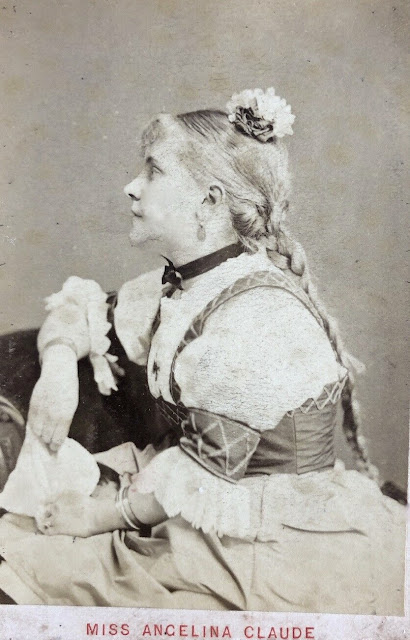 Now, Mr Power. If Angelina came from a successful dancing family, Power came from two. His father, Robert Power, comic dancer and pantomimist, one of a family of theatricals from Liverpool, had married Fannie LeClercq, the eldest daughter of an even more prolific dancing and acting family -- Charles (20 September 1797- 26 November 1861), Mme number 2 Margaret née Burnett (d 28 June 1889), Mlle [Margaret] Carlotta, Mlle Louise Mathilde, Mlle Rose Mary Ann, Mons Arthur L, Mons Charles A, Mons Pierre Paul Tertius, Mlle Pauline Alice, ?Mlle Clara, ?Mlle Marie – into which I am not going to venture, they being a book all by themselves.

Suffice it that, Fannie, after her husband’s death, metamorphosed into ‘Mrs R Power’, well known comic actress, and she worked up to 1894 as a character lady (The Lights o’ London) before her death, the following year, after sixty years on the stage.

Right. That’s the ancestors. Dyed in the wool theatricals every one. So there was little doubt which way young Angelina and her Robert would go. And they did. Although latterly not very often in the same show. Robert was strictly a pantomimist, Angelina was a lively soubrette actress with excellent dance training, obviously, a charming singing voice and a (stage) personality that made an audience smile and go ahhhh.

After a few post-marital years of appearing largely in pantomime (and producing two sons) in what remained of her teens, she ventured into burlesque and then joined the company at the consequent Prince’s Theatre, Manchester (she played alongside Selina Dolaro in panto!), and then with the fine touring comedy and burlesque troupe run by Joseph Eldred (Martha Bunn in Checkmate, Raleigh in Little Amy Robsart, Mercury in Paris, Darnley in The Field of the Cloth of Gold, Little Em’ly, Jack Onion in Love’s Doctor, Prince Halcyon in The Sleeping Beauty …

I suspect it of being H B Farnie who discovered this little lady in the provinces and cast her as leading lady in his new London show. As Rosalie Ramponneau in Nemesis she won all hearts ‘a new and promising actress from the country ... triple encore … the brightest merriest little lady imaginable’ as Nemesis was boosted to ‘an almost unprecedented degree of popularity’. She had a particular success with the Tickling Song, ‘Ne me chatouillez pas’, which had been sung by Judic at the Eldorado music hall some years previously. 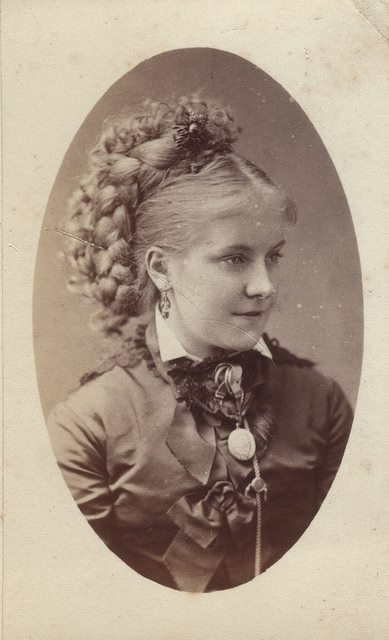 Nemesis was taken off after a huge ten months, and replaced by more of the same in Eldorado, itself replaced by … more Nemesis, then a revival of The Field of the Cloth of Gold with Angelina in the star Lydia Thompson role of Darnley with its Sneezing Song, before Farnie manufactured another major hit for the now favourite team based on the Parisian Le Carnaval d’un merle blanc. Loo, or the Party who Took Miss featured Angelina in the role played by the voluptuous Julia Baron in Paris, as a malicious little prima donna.
Both Nemesis and Loo stayed in the repertoire as Intimidad, Patient Penelope, Flamingo, Antarctica, Cracked Heads were all given a showing … 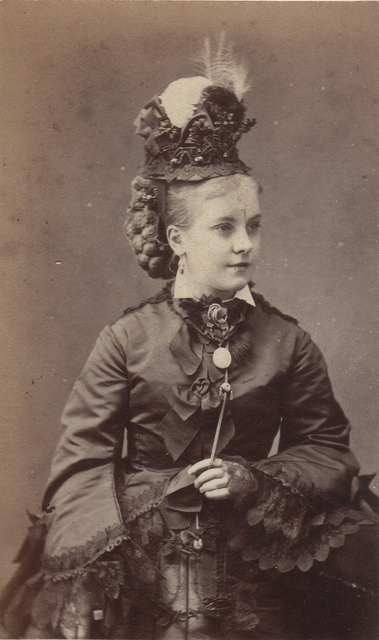 And Robert Power died. I notice Ange didn’t go to his funeral. And she didn’t miss a night .. I wonder … they were definitely together in 1870 and the 1871 census .. 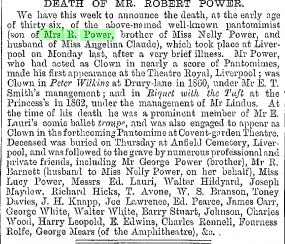 But she soon would quit the stage. Not for the old husband, but for a new one. On 29 August 1876 Angelina Power wed the wealthy Dublin racing and theatre man, Richard Kavanagh, and put an end to her career. They would have nearly 30 years of marriage before his death in 1904 (7 December), a marriage which produced seven children, of which the actress ‘Toby Claude’, who briefly married into another big theatre family, was the eldest.

George Edwardes had a character named Richard Kavanagh written into his show The Messenger Boy, so I imagine Kavanagh was not only a major shareholder in the Gaiety Theatre, Dublin, but also in its London filial of the same name.

Angelina remained in Ireland after her husband’s death, living with Carlotta (Charlotte) and the unmarried Kavanagh children, and she died in Dublin 1 January 1926.

She might have only had three years as a London star, but my goodness they were grand ones! 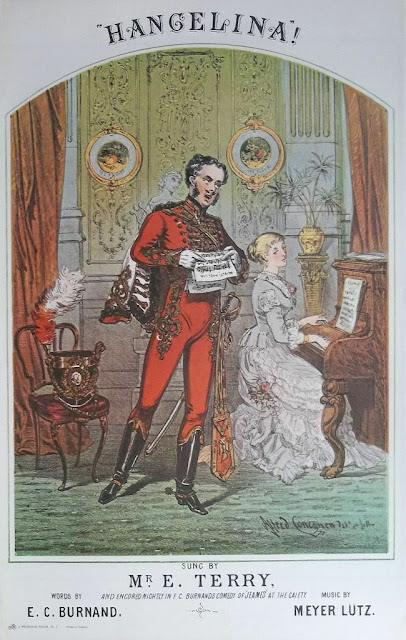 A few little umm corrections. The obit says that Robert Power was brother to music-hall favourite, Nellie Power. He was not. Nellie was born Ellen Maria Lingham, it was her mother who was Agnes née Power, which I believe makes them cousins. 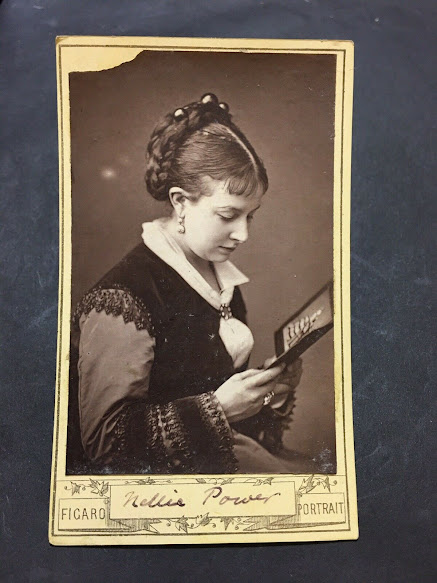 An article on Marie Longmore of burlesque fame says she was sister to Mrs R Power. Do they mean senior or junior? As far as I know, Angelina had no sister. Are they saying she was Marie Leclercq? No. I refer to my ancient notes: ‘Alexander Longmore m Eleanor Swainson, St Phillips Birmingham 16 Sept 1832; she m (3) John Warde. She died 11 Oct 1881. Her 7th daughter is Mary (now Marie) Longmore (Mrs F W Humphreys). Seventh! ‘Her only daughter by her second marriage is Mrs R Power’. This, in a theatre magazine? Three Mrs R Powers are already enough. I think I shall ignore this.

Posted by GEROLSTEIN at 1:08 AM

You do well to ignore the reference to Mrs R. Power. The R was a typo (or something akin to that). She was actually Mrs WS Power, Marie Longmore's half sister and my great grandmother!

Thanks Rosy! That's newspapers and obituaries for you. I knew it smelled curious ...!